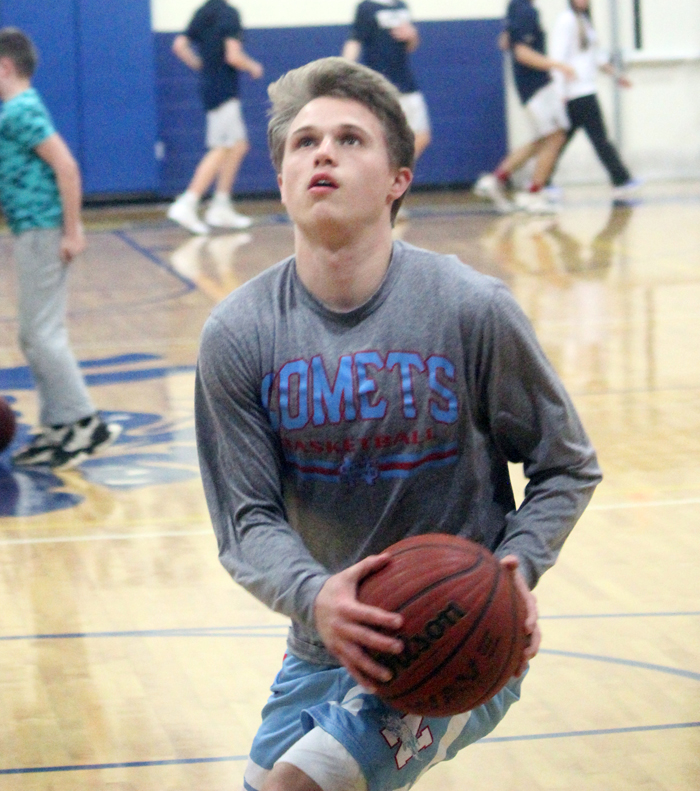 North Stanly guard Bryson Childress will be playing a postgraduate year this fall with the Hargrave Military Academy squad before moving on to college ball in the 2020-21 season. (Photo by CHARLES CURCIO/staff)

The goal of many high school basketball players is to play the game they love at the next level, especially to play Div. I college basketball.

In the case of North Stanly senior guard Bryson Childress, the recruiting process for him has led him to an institution which he hopes will lead to bigger chances next season in college.

Childress recently announced via his Twitter account his intentions of attending Hargrave Military Academy in Virginia for one post-graduate season.

Hargrave’s prep school basketball team has won three national championships including three seasons ago. The programs have produced more than 20 players who have played in the NBA along with hundreds who have played Div. I basketball.

Childress said he “had a lot of good options” in terms of schools recruiting him, but he “didn’t feel like any were the right fit for what he was looking for in a school.”

The Comet senior said Hargrave had wanted him to play his senior year at the school, but ultimately he “wanted to play my last high school year with the guys I’ve grown up with my whole life.”

He said he was thankful for the opportunity from head coach Lee Martin whom he said “has believed in me enough to give me a chance to be a part of an incredible history of great players.”

A year at Hargrave, Childress said, “will serve as a year to become accustomed to a college season and atmosphere that I feel will open up a lot of school opportunities feel I’ve deserved the chance to play at.”

His recruiting process, Childress said, was good but has been “very frustrating.” He said many coaches have offered him full scholarships and followed him all of his senior season, for which he was glad.

However, schools in which he had an interest did not develop a relationship with him until late, noting the new transfer rate in college.

“They’ve helped me understand that the recruiting process can be a waiting game and to help guide me to pursue the level of play they think I could play at,” Childress said.

Childress, the leading scorer in Stanly history with 2,187 points, finished among the top 25 all-time in the state in career points this season.

He said he has proved himself “on multiple platforms,” whether playing against box-and-one defenses in high school or playing AAU games in front of college coaches “watching your every move against the best players in the country.” He played five games every weekend during a two-month span in front of more than 100 or more college coaches.

Childress also played in the recent N.C./S.C. All-Star game in Wilmington where he scored 21 points. His efforts in that game, he said, “proved to myself how good I think I can be based on the last few years of overcoming different situations and atmospheres to be able to compete to the best of my ability to win games.”

Childress said he did not know what his long term goals are at the moment other then saying he “loves the game of basketball and I love the relationships it’s helped me build. I love the chance to go out and just compete in front of people.”

He hopes to go to “the right school that gives me the opportunity to play for four more years and make memories on and off the court that will last a lifetime.”

Childress said he knows God has a plan for him and if he “continues to work hard and do the right things then everything will work out.”

He also said he had been blessed with great teammates throughout the years and he “can’t begin to express how meaningful they have been in my life.”