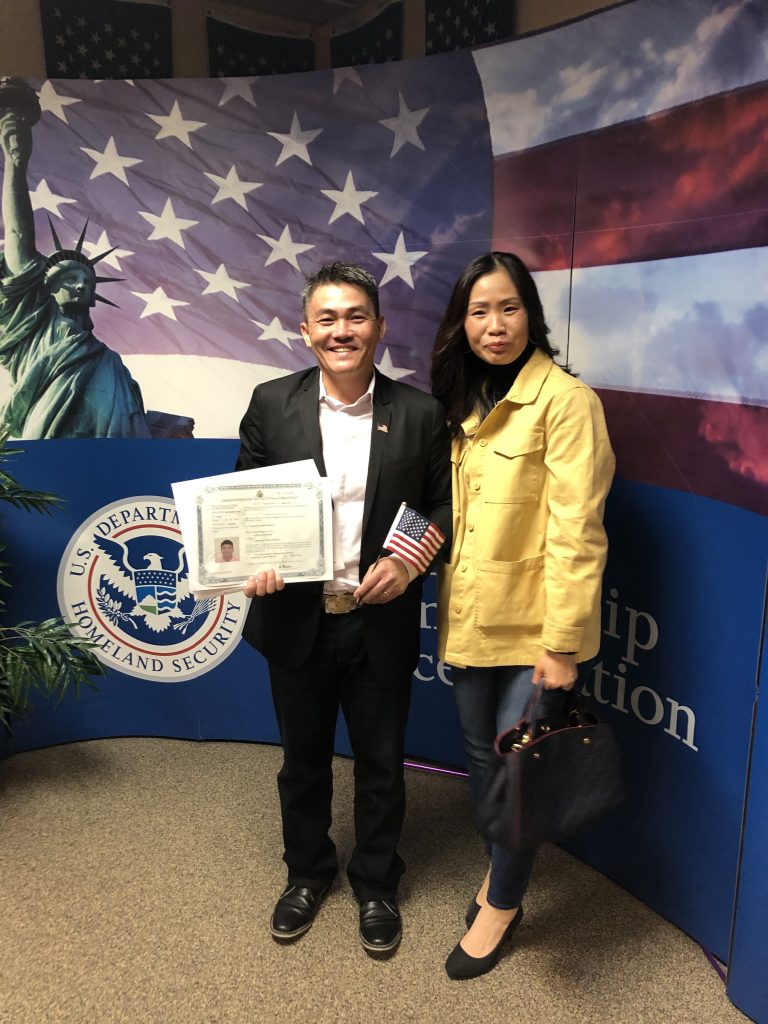 Tho smiles after he was sworn in as a U.S. citizen on April 2. Phoudone, whose naturalization ceremony was March 14, proudly stands alongside him. (Contributed)

Tho and Phoudone Naovarath serve Asian food, flounder sandwiches, pizza and burgers at Tho Pizza & Hot Subs in Badin, which they’ve owned and operated since 2017.

The couple are both from the Southeast Asian country of Laos.

Even though they created a successful life in Badin, something was missing —though they’d lived in the U.S. since the early 2000s, they were not U.S. citizens.

That changed earlier this year.

After studying for their citizenship test for roughly a year, while also running the restaurant seven days a week, all the hard work paid off.

Phoudone passed her citizenship test Feb. 13 while Tho passed his April 2. They both took their tests at the U.S. Citizenship and Immigration Services field office in Charlotte.

“I felt freedom,” Tho said after she learned she passed her test.

“It feels just wonderful to be U.S. citizens,” she added.

The test wasn’t hard because she had studied so much, she said.

Phoudone was officially sworn in as a U.S. citizen in Charlotte on March 14 while Tho’s naturalization ceremony was April 2.

“I feel clear on the inside,” Tho said in a video after he was sworn in as a U.S. citizen. “America has welcomed me.”

“I am so very happy to have citizenship,” Tho added.

The test had multiple components. Tho and Phoudone were asked up to 10 civics questions (from a list of 100) and had to answer at least six correctly.

Tammy Burgess, who works at the Badin Post Office across from the restaurant, spent many months quizzing the couple.

“They knew more answers to the questions than I did,” Burgess said.

Phoudone is happy she does not have to study every day. She’s especially excited she doesn’t have to listen to the computer program that asked her and Tho questions while they were cooking.

“I felt proud when they both passed their tests,” Tarrence said.

“Tho and Phoudone are great family business owners in Badin who have worked hard to accomplish all they’ve accomplished and they’ve been humble and gracious along the way,” added Badin Town Manager Jay Almond.

When he discovered they were studying to take the test, while also working every day at the restaurant, he was impressed.

“To learn they’ve achieved legal U.S. citizenship in the midst of everything else they do is really admirable,” Almond said. “We’re happy to have them in Badin.”

When a customer at the restaurant inquired about their long-term future plans, Phoudone replied with a short, definitive answer.