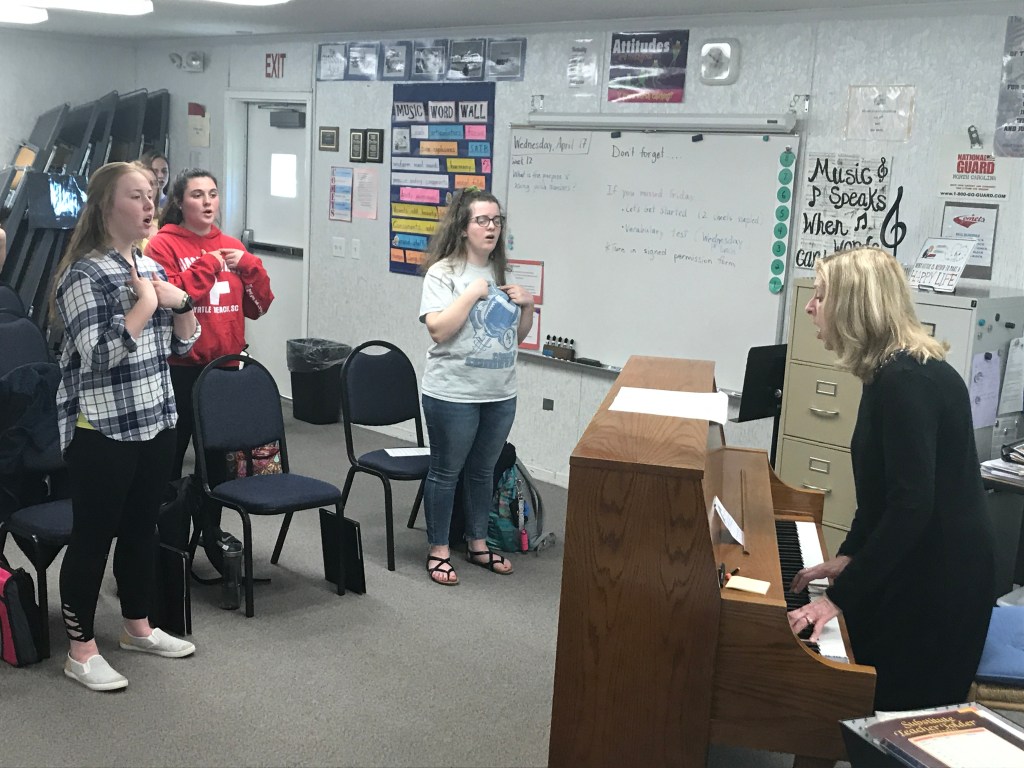 Aza Hudson practices a song with her students for their May 4 concert. The students are singing and performing sign language.

After 35 years as a music teacher in Stanly County, and 23 of those years as chorus and handbell teacher at North Stanly High School, Aza Hudson is retiring at the end of the school year.

Her final concert will be Saturday.

Hudson grew up in Albemarle and always loved music.

She learned to play piano when she was 6 and began playing accompaniment for an adult Sunday School class each week at First Street United Methodist Church in 1972, when she was in the fourth grade. She also sang in the choir at the church.

“I’ve always wanted to teach,” she said, but she didn’t imagine becoming a music teacher.

She enrolled at Pfeiffer College initially thinking she would become a high school math teacher, but with the help of an adviser, she changed course towards music.

She double-majored in music education and church music at Pfeiffer.

During the fall of 1996, Hudson began teaching chorus music at North Stanly High School — and she enjoyed it so much that she never left.

“I came here and loved it immediately,” she said.

Despite going from teaching elementary students to high school students, Hudson said there was no major adjustment.

“No matter what person you work with, you try to treat them with kindness,” she said.

But high school students allowed Hudson to teach more complex pieces and go deeper into the music than she could with younger students.

Her students have performed throughout the county and also in Charlotte, Raleigh and Winston-Salem. They have been invited to perform on the State Capitol building lawn in Raleigh.

Her handbell choir has performed for the Southwest Education Alliance’s Best Practices Seminar for school administrators in Charlotte and for the North Carolina Music Educators Convention in Winston-Salem. Her handbell choirs have also accompanied the Stanly County Chorale.

Her chorus students have sang for a national security conference at the Charlotte Convention Center.

Hudson estimates she has conducted about 250 performances during her time at North Stanly.

Many of her chorus students have also performed in All-County concerts. She also has taken around 150 students to the All-State Choral Festival during her time at North Stanly. (For a report on the latest trip to All-State, visit https://www.thesnaponline.com/2019/05/02/north-stanly-students-participate-in-all-state-chorus/ .)

Hudson’s chorus classes are open “to anybody that wants to sing,” she said.

Her chorus classes are a mixture of experienced students with those who are starting to learn.

“We just help each other,” she said.

Her students perform a variety of pieces including church music, music in Latin or another language, more contemporary, mainstream music and even Broadway pieces.

Students are currently practicing two songs they will sing. They will also hand sign certain words. A teacher assistant at the school has helped teach the students sign language.

“We are singing and signing the whole time,” she said.

Her handbell choirs will perform several recognizable pieces during the concert Saturday, including the “James Bond”theme, the “Mission Impossible” theme and music from “Star Wars.”

Her classes provide a non-threatening atmosphere for students where it’s okay for them to make mistakes, she said.

“It’s okay to make a mistake, but we do want to be caught trying,” Hudson said. 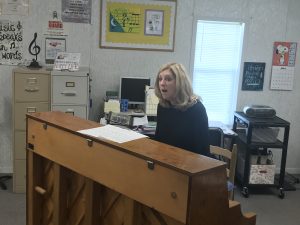 Several of her students have gone on to have successful music careers once they left North Stanly.

Mitchell Johnson tours around the country with his 30-member gospel choir, the Rehoboth Fellowship Chorale, while Louis Cato is a member of Stay Human, the house band that performs on “The Late Show with Stephen Colbert.”

Several of her students have become music teachers and a few have started their own handbell choirs.

“It’s exciting, I’m so proud of them,” she said of her former students. “I think that sometimes your choral students and handbell students are some of the bravest people in the school because it takes a lot of courage to get up in front of people and perform.”

Many of her former students have learned much from Hudson.

“For me personally, I think I learned more about life and leadership skills than notes on a page,” said Aaron Burleson, who was a member of Hudson’s first handbell choir. “I’m still amazed at her ability to get the most out of any group she works with, regardless of age, talent or experience.”

“Her life is a testament to how we should treat others, and to how we can empower others to learn things they may not know that they are capable of,” said Audrey Carter. “She is a steady, encouraging force and has truly been a blessing to me in my life.”

Aside from school, Hudson is active in the community, serving as the minister of music for First Baptist Church in Albemarle since 2007. She also has taught at Stanly Community College and has conducted the Stanly County Chorale.

She has four children and all four attended North Stanly and sang and rang handbells in their mother’s class.

“I have loved singing and ringing with all of my students, but it is really fun to have your own children in your class, too,” she said.

She is looking forward to having more free time to spend with her family and friends. She will continue working at First Baptist Church.

And even though she is retiring as a music teacher, music will still remain an integral part of her life.

“Music is such a positive way of expressing yourself,” she said. “It can bring joy and healing to yourself and to others.”

Her final concert will be at 7 p.m. Saturday at First Baptist Church.