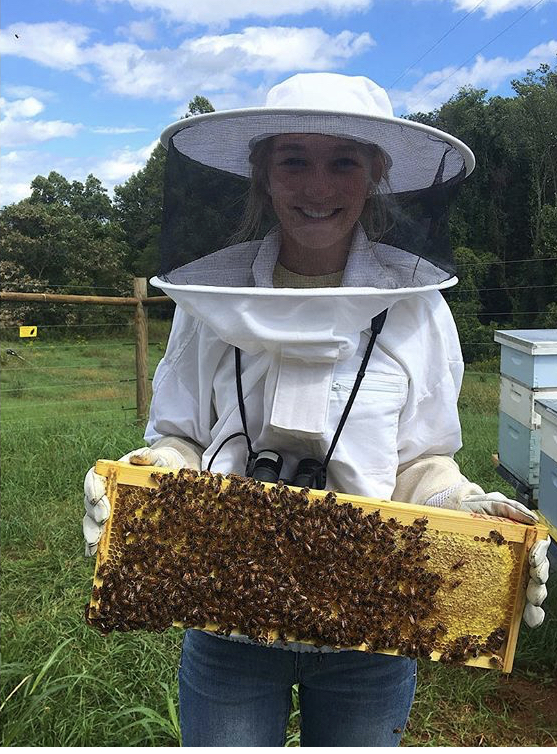 Annika Kuleba is a freshman at Sweet Briar College in Virginia and also a beekeeper. (Photo contributed by Annika Kuleba)

A girl from Stanly County recently received the Girl Scout Gold Award, which represents the highest achievement in Girl Scouting.

Annika Kuleba, 18, who is a freshman at Sweet Briar College near Lynchburg, Va., was awarded the Girl Scout Gold Award for her Bee Aware project, which highlighted beekeeping, agriculture and environmental issues facing the world.

According to her website, “The goal of my project is to educate people about the importance of honey bees, the challenges bees currently face, and provide people with an opportunity to help bee populations in their community.”

One out of every three bites of food people eat depends on bees and the bee population is decreasing, she said.

Kuleba has been a beekeeper for about eight years.

She is part of the Girl Scouts Hornet’ Nest Council, which is headquartered in Charlotte and serves 17,000 girls and adults in eight counties in North Carolina and South Carolina, including Stanly.

Kuleba, who is from Endy and went to Gray Stone Day School, created and distributed more than 1,300 Bee Bombs (a mixture of clay, mud and wildflower seeds) to people and organizations in and around Stanly. The bombs would then be tossed out in areas to grow flowers for bees to pollinate.

She spent more than 80 hours and the majority of her junior and senior years creating her project and spreading awareness about pollinators and the bee bombs to the community. She created a Bee Aware website (beeaware.today) and Instagram account. She completed her hours and her final report last summer.

She decided to focus her Girl Scout Gold Award on honey bees when her family farm lost five out of seven hives due to a pesticide spraying at a nearby farm, according to her website.

“Being in Girl Scouts for 13 years has really impacted me and has really made me the woman I’ve become today,” she said.

She added that without the Girl Scouts, “I wouldn’t be where I am and as successful as I have been.”

In an interview with The Stanly News & Press, she made a point to thank her Girl Scout Troop leaders Katherine Kuleba and Susan Calkins as well as Contina Salyer, who’s in charge of Girl Scouts in Stanly, and her project advisor Dustin Adcock, who works at the N.C. Cooperative Extension, for all of their support.

Once Kuleba left Stanly for college, where she’s majoring in environmental ecience, she continued her bee advocacy.

Kuleba mentioned her interest in bees to a professor and, with a partnership with the Elysium Honey Company, she helped Sweet Briar acquire 23 bee hives. She is one of the main beekeepers, she said. The school is hoping to have 50 hives by the end of the summer. The school will also start a bee club next year.

In addition to her studies and beekeeping, Kuleba is the captain of her college’s golf team.

She hopes to pursue a career as an apiologist (a person who studies bees).