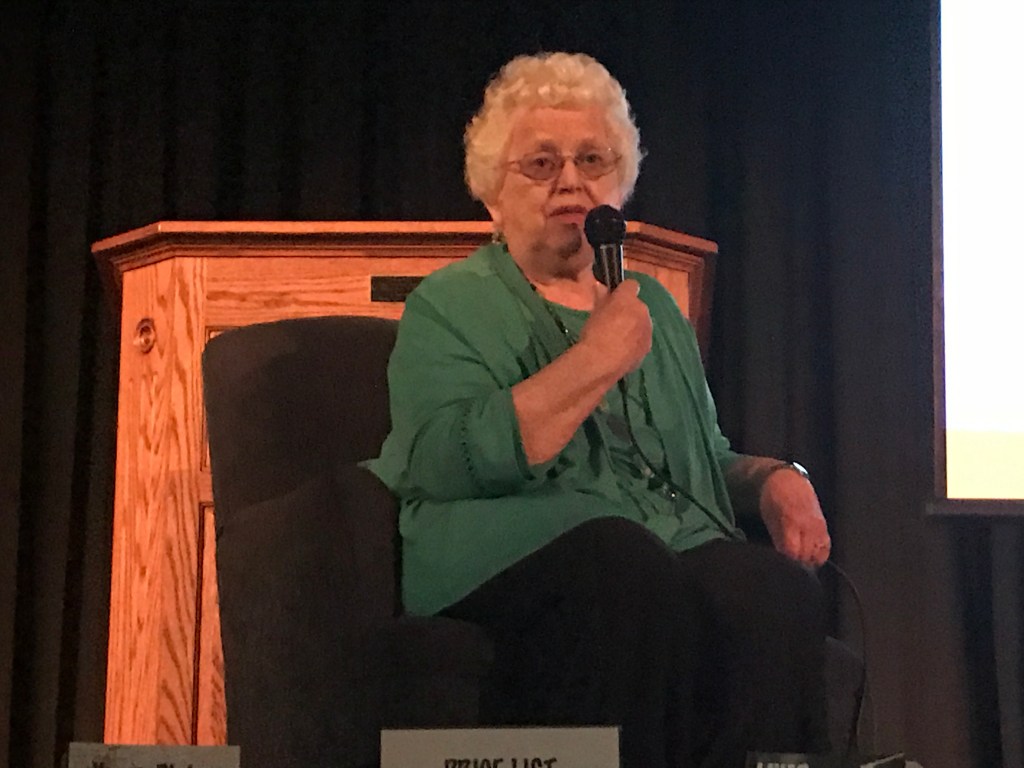 Birgitta McGalliard spoke to students at Albemarle High School about growing up during the end of World War II and about her father's time in a Soviet prison.

Often the best way to learn about a specific time in history is not by reading dusty textbooks, but by listening to people that were part of the history.

McGalliard, 74, who lives in Boone and taught French and German at the collegiate and K-12 level, described how her father, Roland Gottlieb, an Austrian-born German diplomat, was captured by the Russians in 1944 and separated from his family. She has written two books about her childhood and her father and has spoken to numerous schools, churches and book clubs.

McGalliard was born in Austria in 1944, shortly before her father was captured. After he learned of her birth, Roland telegraphed his wife to name the child, his third daughter, Birgitta.

Her mother learned Roland had been captured by the Russians, but the family didn’t know if he was dead or alive.

“We lived in uncertainty,” she said, adding that starvation and famine were common in post-WWII Austria.

McGalliard’s family left Austria for Sweden, where her mom’s family lived. Sweden — like Switzerland — was neutral during the war.

Roland spent years toiling in a Russian Gulag labor camp, the Lefortovo Prison in Moscow, one of the most secretive and sensitive facilities in Russia.

“It was well-known during the Stalinist Period as a particularly nasty place used for intelligence agents to interrogate political and foreign dissenters,” McGalliard said.

The prisoners had to stand in a small, cramped cell the whole day and could only lie down for a few hours at night. They also received 10 minutes of outside exposure every 10 days, she said.

“I don’t know how he survived it,” she said.

He lived in the labor camp for five and a half years until (because the Russians viewed him as a spy) he was transferred to a prison in Siberia — a hundred miles north of the Arctic Circle — where he lived from 1949 until 1955.

In 1952, McGalliard and her family heard that he had been killed while in Siberia. It wasn’t until two years later, as her mother was set to remarry, when she learned her husband was still alive.

After Stalin died, the new Soviet leader, Nikita Khrushchev, did away with the labor camps and Roland was reunited with his family in Sweden. In August 1955, after 11 years, McGalliard finally met her father.

“When I saw him walking down that railroad track facing towards me holding two suitcases in his hands, I ran down that track, threw myself up into his arms and hugged his neck,” she said. “And I literally stayed so close to him for the rest of my life until he died in 1989.”

Roland resumed his embassy duties, taking the family to Germany, Canada and eventually to the United States, specifically Atlanta, in 1969.

McGalliard has quite the history when it comes to citizenship.

She was born a German, became Austrian after the war for about eight years, then became Swedish for about three years, before becoming a German citizen again.

It wasn’t until 1996 when McGalliard became a naturalized U.S. citizen.

“Not many people can say that,” she said about her many citizenships.

She married an American and has lived in Boone for the last 40 years. She has taught at several colleges, including Appalachian State University, and at Watauga High School in Boone and Hudson Middle School.

Roland asked her to write his memoirs about his life in the Soviet prisons before he died.

She has written two books, “Lives Divided” about her childhood in Sweden without her father, and “Years Stolen by the Russian Gulag: My Father’s True Story,” about her father’s experiences in prison.

She used many of her father’s letters to help write her books.

McGalliard ended her presentation by encouraging the students to start writing about their lives.

“Write about your life because your lives are important, too,” she said. “And you will become parents one day and grandparents and maybe your children or grandchildren will want to know what your story is.”