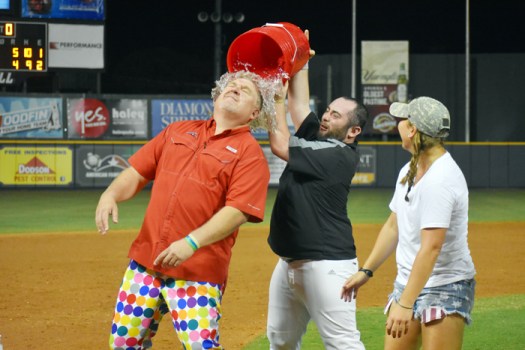 Todd Parnell, aka “Parney”, does the ice bucket challenge along with I.J. Balaban and Megan Angstadt. (Contributed) 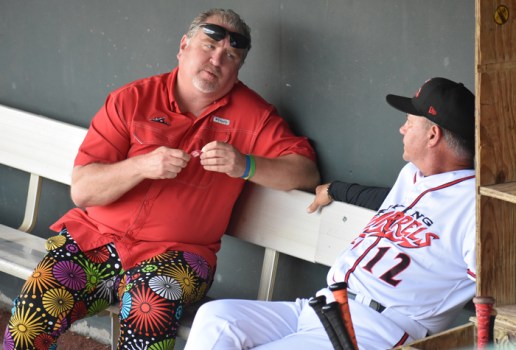 His nickname and the glaring, brilliant colors of his pants may be some of the more recognizable features, but the hard work he has put into his own industry has led to an honor-filled career.

Todd Parnell, a native of Locust who is known by his one-name nickname “Parney,” recently began his 30th year in minor league baseball. His drive and dedication have helped him to find a career in something he loves.

Sports has always been a part of Parnell’s life, he said, noting he had a ball in his hand all the time, whether football, basketball or baseball.

“If I was inside, outside; I’d sleep with a football, basketball or baseball. I was a typical sports kid. I ate, drank and breathed it,” Parnell said.

He never had what one might call a balanced lifestyle which some children have experienced trying many different things to find out what they like and don’t like. For him, it was destiny he would wind up working in sports.

In September 1979, Parnell and his family moved from Locust to the suburbs of Philadelphia.

“I was 13 years old. It was a completely jacked up time to move your kids,” Parnell said.

He said he had a great childhood in Locust and to this day, when asked where he is from, he still tells people he is from Stanly County. Parnell still manages to get back to visit Locust now and then but does not have a lot of time due to the rigors of running two franchises at the same time.

Parnell graduated from Messiah College in Harrisburg, Pa. and played basketball for the Div. III school.

His first job in baseball came in December 1989 when he was hired by a team in Reading, Pa.

Parney became the general manager of the Class A Piedmont Boll Weevils in Kannapolis from 1997-2001. Now known as the Kannapolis Intimidators, Piedmont set overall and average attendance records in his four seasons with the club, and he earned one of his first individual honors, being named General Manager of the Year by the South Atlantic League in 1999.

He described his time with the Boll Weevils as “one of the hardest jobs, if not the hardest job, I’ve ever had” in terms of marketing and promoting a smaller team within the Charlotte market. At the same time, controversies around the construction of the team’s ball park existed as well.

The Intimidators are building a new downtown ballpark scheduled to open in the 2020 season and are changing their mascot as well. Parnell said “when I look down there and I see Kannapolis is building a new ballpark and the city is doing it, why couldn’t they do that in 1997?”

The Kannapolis franchise began in 1995 as the Piedmont Phillies before the ballpark was completely finished, still missing restrooms, concession stands and more. The year before Parnell joined the team, it was rebranded as the Piedmont Boll Weevils to honor the textile manufacturing in the area.

Parney and the staff came up with a memorable slogan to promote the team, “Unbollweevible,” which caught on locally. Even the mayor of Charlotte and future North Carolina governor Pat McCrory, knew of the phrase when Parnell walked into a meeting with him.

“I walked in and he looked at me and said, ‘You’re unbollweevible!’ ” Parnell said. “I remember telling the staff we’re getting there because the mayor of Charlotte knows unbollweevible.”

He said the greatest part of the job with Piedmont was to be able to be a minor league baseball team’s general manager just 10 miles from where he grew up.

“To have my aunts, uncles and cousins and all my relatives, not only come to the games, but watch my career from a pretty close vantage point was certainly the highlight of being there,” Parnell said.

He added the job in Kannapolis was pivotal to his entire career growth.

In 2002, Parnell moved back to Pennsylvania to the AA Eastern League’s Altoona Curve.

In seven seasons as general manager, the team set single game and season club attendance records while earning awards such as the Larry MacPhail Promotional Award in 2004. The Curve also won the John H. Johnson President’s Trophy, the highest honor a team can receive from Minor League Baseball, in 2006. Baseball America’s Bob Freitas award also came to Altoona in 2006, making the Curve just the 11th franchise to win all three awards.

Parnell served as president of the Greenberg Sports Group, a company which provides teams with management, consulting and marketing services.

In his time with GSG, he also was president of the Carolina League’s Myrtle Beach Pelicans and the Short-A New York/Penn League’s State College Spikes. Before moving to his current team, Parnell oversaw three teams at the same time.

His longest tenure with any team has been with the team for which he still works, having spent 10 seasons with the AA Eastern League’s Richmond Flying Squirrels.

In his time with the Squirrels, Richmond has been around the top of the AA Eastern League in attendance, including leading the league in average attendance in 2010 and 2013-2015, along with overall attendance figures in 2010, 2012, 2014 and 2015. The team was also nominated for the 2016 John Henry Moss Community Service Award as well, winning the Freitas Award from Baseball America magazine, which is given to the best baseball organization at each level.

While also serving with the Squirrels, Parnell was named as the president of the Double AA Montgomery Biscuits in Alabama, members of the Southern League.

Richmond, however, is his main focus, Parnell said, adding he lives in Virginia.

Elton John has his glasses. Michael Jackson had his glove. Todd Parnell has his pants.

Not just normal khakis, though, but the brightest pants in the loudest colors possible, which have become his trademark whether at the park or out to dinner with his wife, Tanya.

The tradition of Parnell and his pants started in Richmond when he wore them one night and got a good reaction from fans the next day when he went back to normal pants.

Parnell said the next night after wearing the colorful ones, a fan came up to him and said, “Tonight, you’re not even trying hard.”

“(My pants) set the tone; they speak before I do, let people know I’m there to have fun, have a good time and not care what people think,” Parnell said.

The loud pants are there whether it’s a game day or not, Parnell explained, noting his wife “understands I have to be on.” He added, “I never had someone more supportive (as my wife).”

At one of his many speaking engagements, Parney said a lady came up to him afterwards and said because of his signature pants, every time she sees him she smiles, adding: “I love everything about you.”

Most of the pants come from former professional golfer John Daly’s LoudMouth Golf company, but hopefully before the end of this season, Parney said he hopes to have his own line of apparel, Parney Pants.

Parnell said what he has learned in his career at various levels of minor league baseball is one has to do things that are fun and be impactful in the community, regardless of the team’s classification.

“To this day, when you walk into the Richmond Flying Squirrels office, we have wall wraps down the hallway with our three core values…have fun every day, be different every day, be impactful every day.

Like the fun of wearing his signature bright pants, Parnell said he has never had a boring day in his life.

More Than The Kudos

Beyond the awards, Parnell said, what’s more important has been reading programs and other impactful initiatives to help the communities in which the ball teams play.

“We really try to utilize the brand of our team to be impactful to people in general, but specifically to kids in the schools,” Parnell said, noting one program where kids who got A’s on their report cards got a ticket to a game.

Although it’s important to reach out to kids, Parnell said, “I have never seen an 8-year-old drive themselves to the ballpark.” If the organization can give a kid a free ticket for reading 10 books, their mother and father, siblings or grandparents or others will take them to the ballpark.

Getting families to talk about experiences at the ballpark can potentially keep the team in people’s minds 12 months out of the year on a daily basis.

Staying in the Game

In the bio on the Squirrels’ website, one of the phrases used to describe Parney is him having an “exuberant nature.”

Parney gives the credit for that to his family who raised him “in a wonderful Christian home.”

“I was brought up to embrace every day,” he said. “As I’ve gotten older, I do that even more.”

He knows he is lucky to be a person who drives to a minor league ballpark to make a living.

Looking back, he said when he was 10 years old he was going to games with his father, and that “if you would have told me then that 42 years later I would be celebrating my 30th year in minor league baseball, I would have said I’m going to have the best life of anyone I’ve ever met.”

He still remembers the names of his Little League teammates, which at a recent talk to 400 area Little League players in Richmond he was able to list each by name, like Randy Drye, Tommy Lewis, Brian Morton and Rodney Furr.

His truck still finds a way to the park seven days a week, even if meant to be heading somewhere else.

“I’m like, ‘Wait. What am I doing?’ I just wanted to go to the gym or whatever. It’s just a part of my life and I feel very fortunate to still be that little boy from Locust, North Carolina.”