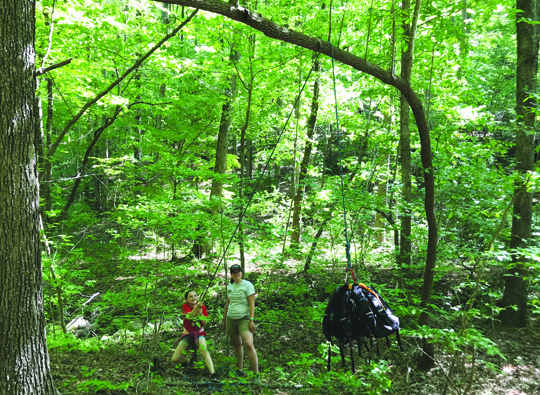 Audrey Lamb tries to pull the rope as instructor Emily Hitzfelder teaches the students about the bear bag hang.

On Tuesday morning, fifth graders at Aquadale Elementary got to leave the classroom and learn about science  while traversing the trails at the Uwharrie National Forest in Troy.

The outdoor expedition was arranged by Muddy Sneakers, a nonprofit, N.C.-based environmental education program that works with fifth graders across 11 counties in Western N.C. and six in the Piedmont.

The organization’s motto is “the joy of learning outside.”

The program educates students on the core concepts of the state science curriculum using hands-on teaching methods in outdoor classrooms.

The best part about Muddy Sneakers is “getting the students out in nature and exploring the concepts that I teach in the classroom,” said Aquadale science teacher Mary Wallace.

This is the third year Aquadale has worked with Muddy Sneakers.

Muddy Sneakers is serving 17 elementary schools in the Piedmont region — and two others in Stanly: Badin and Oakboro STEM.

The organization finances most of the program through public funding and private donations, but the schools do contribute a small percentage of the programming cost. Aquadale had a barbecue event this school year to raise the funds.

Tuesday’s lesson was about forces and motion. The students were split into multiple groups, each with a Muddy Sneakers instructor, and they performed field activities to learn about concepts such as force, friction, gravity and motion that they have been studying in the classroom.

The instructors asked the students to name kinds of forces of motion found in the forest. Answers ranged from birds to flies to the students themselves.

A sample activity included trying to throw a rope over a tree to create a bear bag hang, which is a system of ropes and cords used to suspend food in a tree, primarily to protect it from bears.

While the students weren’t able to initially successfully toss the rope over the tree, they learned that if they attach another object (a water bottle) to the rope, it would increase their chances. With the water bottle attached, the students achieved their goal.

Students also built boats out of natural materials and floated them in a stream to measure the speed of flowing water.

In addition to the forces of motion, Muddy Sneakers has helped teach the Aquadale students about genetics, ecosystems and heat energy. They will also learn about weather in the coming weeks.

Besides Uwharrie National Forest, the students have traveled to other places with Muddy Sneakers including the Pee Dee National Wildlife Refuge in Wadesboro and Rob Wallace Park in Midland.

Muddy Sneakers staff makes sure the field expeditions are no further than about 45 minutes away from the schools.

Muddy Sneakers is also offering schools an E.O.G. interactive review. Badin, Oakboro STEM and Aquadale have signed up for the review.

“We like to connect the students to science while also connecting them with nature,” said Elise Tellez, Muddy Sneakers’ Piedmont field office director.

And nature doesn’t just include national forests or parks.

“Science can happen everywhere — not just in a pristine forest but in the weird ditch by the school,” Tellez added.