OUR VIEW: Is it a field of dreams? 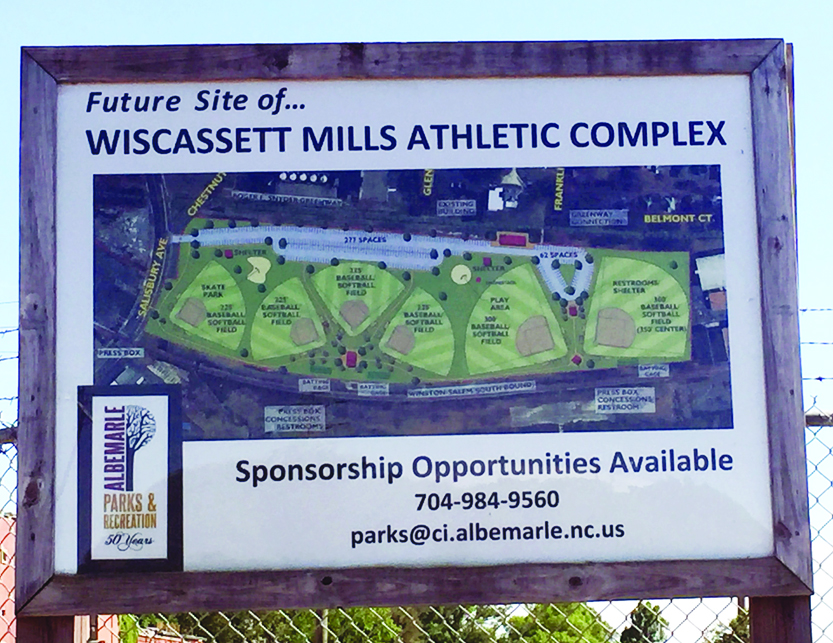 The City of Albemarle still touts the future site of Wiscassett Mills Athletic Complex and the sponsorship opportunities available, even though the site remains “a dream” many years after it was conceptualized. (Photo by ROGER WATSON/staff)

The sign stands guard over a lonely fenced-off field of dreams with a huge smokestack from the city’s textile days towering in the middle of the property.

The sign foretells a time when the Wiscassett Mills Athletic Complex project will blossom into six baseball fields and a skate park. When that will actually happen is a question the sign does not answer. It is unclear whether the “50 years” designation under the Albemarle Parks and Rec logo is for the anniversary of the department or the timetable for the park’s completion.

It seems 50 years may be an optimistic timeline at the moment. It was 2014 when the public, according to information on the city’s website, responded “overwhelmingly positive” to the idea of developing the 20-acres of land on Salisbury Avenue into a recreation complex. Since those forums in 2014, the land remains unchanged. Albemarle’s field of dreams remains just a dream.

Parks and Recreation Director Lisa Kiser told Stanly News & Press sports editor Charles Curcio recently the park is a “low priority for the council” and there has been “no real movement” on the project.

According to the city’s website, the council has committed to provide half the funding for the project with the rest coming from private contributions.

How long is the city going to wait for those private contributions to magically rain down from the blue sky?

If the city is ready to provide half the funding, that should be enough to move some dirt and get the project started. The building of one or two of the six planned fields would give evidence this is a project that is alive and moving forward.

Plus, Albemarle is growing. The city rightfully touts its recent economic development successes.

The council should capture some of the new revenue from this growth spurt and consider funneling it to the Wiscassett Mills project.

The city may have to give more than half to make its field of dreams a reality. It’s been five years. It’s time to move some dirt and build some quality ballfields for our children and our children’s children.

Letter To The Editor: A few reminders for volunteers