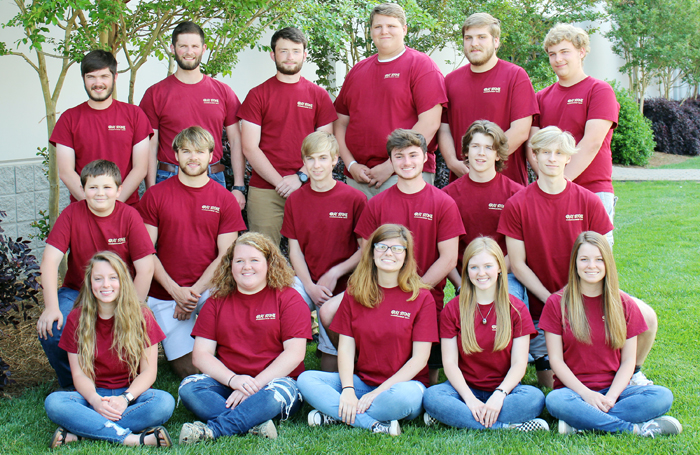 The recent successes of the Gray Stone squad under head coach Heath Efird continued as the Garnet team took the school’s third straight state championship, finishing with a total of 3,648 of a possible 4,000 points.

Gray Stone has only lost one competition in the last four seasons, winning four Tri-County county tournaments and district tournaments and two national championships, along with three straight state titles.

The Garnet team also took the top three overall individual finishes as senior Summer Efird earned her fourth state title. She finished first in hunter skills (184) and second in rifle (194) while adding 193 in archery and 190 in shotgun for a total of 761 of a possible 800 points.

“Winning a state competition is challenging,” Summer Efird said. “You have to be on your A-game that day, and if you do poorly in one event, you can’t let that affect the rest of your day.”

She said being a four-time state champion “shows me that trying hard in something really does pay off, but I can’t take all of the credit. Without my dad, my family and teammates constantly pushing me to be the best I can be, there is no way I would have been as successful as I have been.”

Jack Rummage finished second overall for the Garnet squad with 754 points with a perfect 200 in shotgun, a second place finish in hunter skills (172) and scored 197 in archery and 185 in rifle.

Emery Culp was third in the individual standings, also from the Garnet team. He shot 200 in shotgun and was third in rifle (189) and seventh in hunter skills (164). He also scored 197 points in archery, finishing with 750 total points. 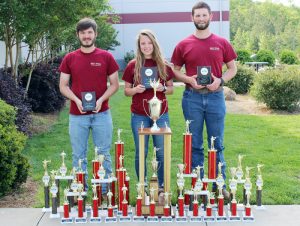 For the first time, the top three finishers in the YHEC state tournament all came from one school. Pictured with all of their individual and team trophies are second-place finisher Jack Rummage, the 2019 individual state champion Summer Efird and third place Emery Culp. (Contributed)

A fourth Gray Stone individual placed in the state’s top 10, Grayson Jones of the Grey team. He won a tiebreaker with Zackary Seats of Forbush Red; both scored 715 total points, but Jones had a higher score in the hunter skills test to finish 10th overall.

“I was raised to always give 110 percent in everything, so that’s exactly how I coach the young men and women on this team,” Coach Efird said. “I want them to be the best that they can be, and I also want them to be able to take away life lessons from participating in this sport. We are so blessed to have such amazing team members, parents, sponsors and coaches.”

The head coach also said “as a parent and coach it feels amazing to help teach young men and women how to correctly use a bow and guns in a safe and effective manner. Almost any time a gun is mentioned in the news it’s because a disturbed person was using it in an unsafe manner. This program helps teach school-age kids safety, respect and proper techniques of gun and bow use. A bow or gun is a tool. It’s no better or worse than the person holding it.”