Albemarle police made an arrest Saturday night of an individual believed to be behind several armed robberies last week. 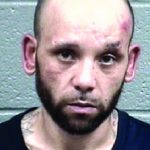 Officers were responding to an armed robbery at the Family Video, 503 Salisbury Ave.

A person described as a black male entered the store and demanded money from the clerk while holding a small caliber weapon, police said. The clerk handed over the money, and the suspect left the business. No one was hurt during the incident.

Due to the increase in the number of robberies the city has experienced lately, uniformed and undercover officers were placed throughout the city in an attempt to catch the person responsible.

As the investigation continued that night, it was found Carpenter was responsible for at least three other robberies and charged for the robberies that happened April 29 at the Speedway, 1702 U.S. 52 N., and April 30 and May 1 at the Alco 20/ Shell Station, 1973 E. Main St.

Carpenter was arrested and charged with four counts of robbery with a dangerous weapon and four counts of possession of a firearm by convicted felon.

His next court appearance is scheduled for May 13. He received a $150,000 secured bond.