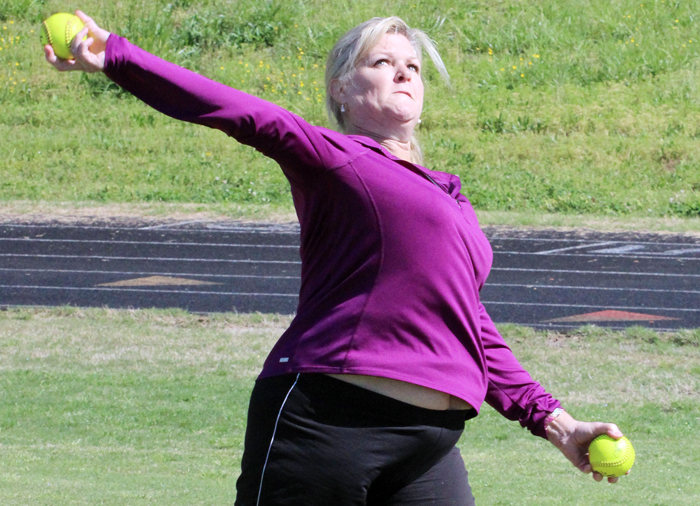 Michele Boone is all concentration as she fires the softball far down the field at Albemarle High School’s football stadium as part of the 2019 Uwharrie Senior Games. (Photo by Charles Curcio/staff)

Participants from the minimum age of 50 to those in their 80s and beyond compete in an array of sports and contests from track and field to checkers and chess. The “Silver Arts” also allow participants to compete in areas like visual arts (paintings, sculptures), literary arts (short stories, essays), heritage arts (knitting, woodwork) and more.

In the case of the local games, rookies and veterans alike gathered to throw footballs, softballs, hurl the shot put and discus and run events while also coming together in friendship.

Two athletes at the Uwharrie Senior Games, one new and one veteran, have taken their own routes to being part of the movement.

New to the Games

Michele Boone first came to the Senior Games when she turned 50 and played on a women’s softball team in Rowan County a couple of years ago. She played with that team because there were not enough women to field a team at the Uwharrie Senior Games. The team went on to finish second at the state Senior Games in Raleigh.

“I thought I would accept her challenge to participate with her and also many of the seniors I help assist,” Boone said.

In last year’s events, she set several state records, including the softball throw. However, due to the hurricanes, she was unable to compete for a medal at the state level.

Boone said playing in the Senior Games “was one of the best decisions I have ever made,” adding “being a ‘tomboy’ my whole life, at the age of 50 I still had a lot of competitiveness left in me as far as sports go.”

In her time as an athlete in high school at West Stanly, Boone played three sports, including softball and track, earning All-County and All-Conference honors in all three. She also maintained the school’s record in the 400 meters since 1982 until this season, when it was broken by freshman Onii Bivens.

After school, she played Albemarle city league softball, basketball and volleyball until giving birth to her sons, Christian and Jesse.

Participating in the Senior Games “has given me something to look forward to this time each year and also the competition that I will always long for as an athlete, no matter how old I get,” she said. “It makes me want to keep moving and strive to be a better me.”

She encourages anyone 50 years or older to participate in the Senior Games, saying many people who have reached that age “do not realize they are already eligible to compete.”

Boone also said the more word gets out on senior games, the more participation there will be.

“You do not have to be a record holding athlete. There is something for everybody, starting with checkers and chess, for example. The point is to keep moving, keep active and keep making friends.”

Much like Boone, 79-year-old Don Morrison found out about the games through another participant and volunteer, Ron Crawley, whom he knew through the Stanly County Family YMCA. 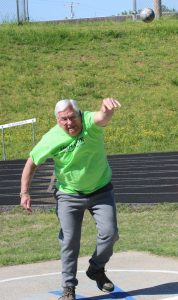 Don Morrison shows his form during the shot put competition at the Uwharrie Senior Games at Albemarle High School. (Photo by Charles Curcio/staff)

Morrison throws the shot put and discus along with football and softball. He also played basketball and cornhole and has played pickleball at the Senior Games in the past.

“I’ve played sports most of my life; I enjoy it,” Morrison said.

He said the Games “give people a chance to get out and do healthy things, get out of their comfortable chairs. Their health will be far better.”

Referring to television, Morrison said, “If you sit down and watch that idiot box all the time, your health is going to go down.”

Playing in the Senior Games is not about winning but participating, Morrison said.

“We need more people to come out and participate. I’ve won gold medals because I was the only one participating in that age group. That’s not good. There should be plenty of people out there playing.”

Echoing Boone’s sentiments, Morrison said it’s not about being an elite athlete in order to participate or even knowing how to do something necessarily.

“We encourage (athletes) and give them the right-sized equipment,” Morrison said.

If he had to pick a favorite event, Morrison would choose the football throw, something in which he has won gold medals twice. He also finished bronze in the discus twice at states.

Morrison also encouraged people 50 and up to participate.

“There is some event out there you can do, whether it’s horseshoes, badminton, even checkers.”

Playing in the Games and playing for the Uwharrie Bobcats made him feel young again, Morrison said.

“When I put my ball cap and have got my glove on, I feel like a teenager.”