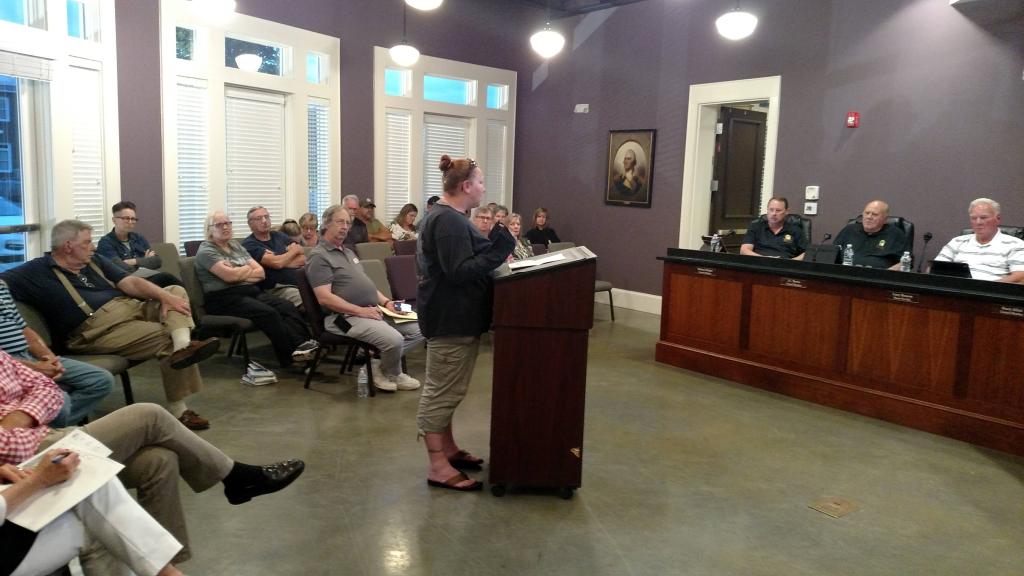 About 15-30 people came to hear more about the Hopper Communities' proposed development. Among them was Kelli Coley, one of three who spoke at the Locust City Council meeting Thursday about their concerns for the project. (Photo by SHANNON BEAMON)

In an effort to appease a slew of local complaints, developers have modified plans for a potential subdivision off Elm Street in Locust.

The original plans, presented in March, elicited dozens of spoken and written concerns from residents in the area, particularly regarding traffic and the loss of a natural habitat.

Since then developers and City Council have met for two work sessions to discuss how to accommodate those concerns. The revised plans — presented at Thursday night’s city council meeting — were the fruit of that.

According to officials, those plans call for larger lots, lower housing density, fewer cul de sacs and more access points in and out of the development, as well as maintaining a natural area through the center of the development.

“We want to work with you as much as we can,” said Bart Hopper, owner of Hopper Communities, which is planning the subdivision.

However, concerns linger — particularly over the amount of grading that would be needed to build on the hilly site. To look into that further, the city has delayed a decision on Hopper Communities’ plans until its meeting in June.

“This (kind of site plan) is new to us,” said Councilman Harry Fletcher, noting the way the lots are graded on the site.

In order to minimize grading, developers are planning to do “step-down lots” — kind of like terracing, but without the retaining walls.

“The idea is to go with the natural flow of the property,” said Nick __, a site planner with Hopper Communities. “We don’t want to flatten the site. We don’t want to bring in a bunch of soil and raise the site. We want to work with what the site offers, build into the grade.”

In addition, they want to maintain as much of the site’s natural area as possible, since that will appeal to buyers.

To that end, 33 percent of the site will be left as a natural area. About 23 percent — mostly along the creek beds that run through the center of the site — would remain completely undisturbed by construction.

In addition, a few retention ponds would be added in the natural low-lying areas for both run-off and visual, waterside appeal.

However, community members were not appeased by the reassurance.

“I understand growth is going to happen but … I can’t see this development maintaining the rural heritage of our city,” said Elm Street resident Kelli Coley.

While the number of houses on the site has dropped from about 285 to 265, they are all very concentrated together due to the large natural area at the center of the property, Jeff Almond, whose father lives on Elm Street, said in agreement.

However it was Elm Street resident Joel Whitley, a former roadway engineer, who raised the concern that seemed to weigh most heavily on the city council’s mind.

“I know from experience there is no way to build that without some major grading,” Whitley said.

Even with step down lots, the site is too sloped not to require moving a lot of dirt, he said.

And according to a Locust ordinance, subdivisions that require major grading are not permitted within city limits.

“I guess my question is what constitutes major grading,” Councilman Larry Baucom said.

“And how much exactly is happening here?”

In order to get a more technical definition of major grading, as well as go view some examples of “step-down lots” in other communities, councilors unanimously decided to not make a decision until their next meeting.

At that time, a public hearing is also slated to take place in regards to the subdivision. Anyone wishing to speak about the project may do so.

Revised site plans to the Elm Street subdivision include the following changes:

• More street connectivity: Along with two connections to Elm Street, new plans call for the development to have roads connecting to South Beverly Drive and Mockingbird Lane;