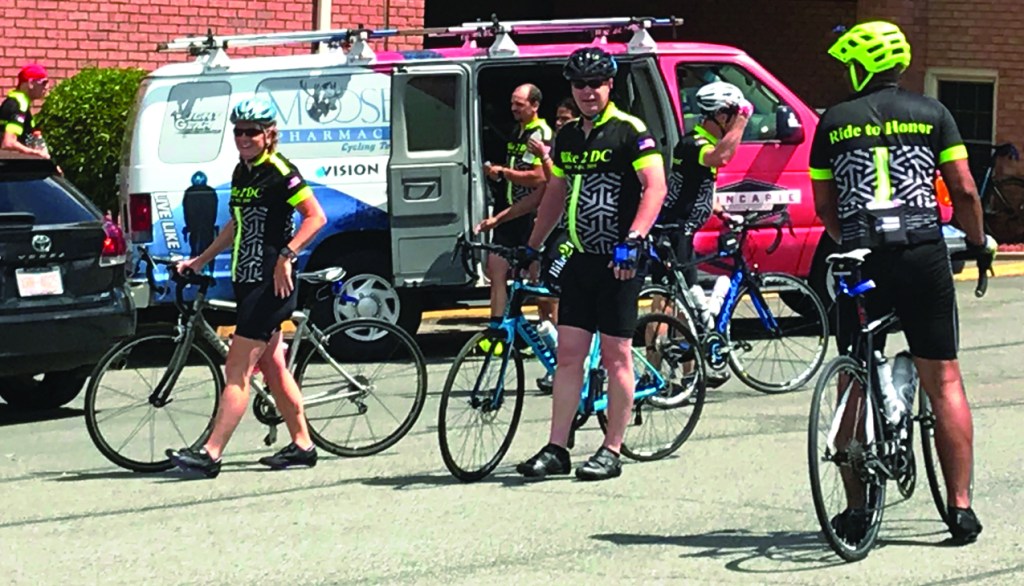 Annual Law Enforcement Bike Ride to Washington, D.C.
Participating cyclists stopped for a catered lunch at Memorial Baptist Church as they passed through Norwood on opening day. Among those pedaling the Charlotte-to-Asheboro course were a number of Stanly-area cyclists who have supported the event for most of its run.

“We ride to support these officers, who risk their lives every day for us,” said Chris Harkey, who along with his wife, Lori, her sister, Lisa Preslar, and fellow cyclists David Hearne and Joel Gniw, were pedaling in the event.

The ride was to leave Norwood after lunch and proceed through Montgomery and Randolph counties, where the cyclists were to spend the night in Asheboro.

“Even though today is the shortest segment, it is also the most demanding,” said Hearne, referring to the trek through the Uwharrie Mountains. “But the last day, when we cycle the final 151 miles, is the most exhausting.”

The event, in which cyclists representing law enforcement agencies pedal from Charlotte-Mecklenburg Police Headquarters to the National Law Enforcement Officers Memorial in the nation’s capital, has been tied closely to Stanly County since its inception.

In April 2007, Charlotte-Mecklenburg officers Sean Clark and Jeff Shelton (a Locust resident) were killed in the line of duty. The days that followed saw numerous acts of love, selflessness and giving to benefit the families of the two officers, but many in the law enforcement community sought to do something physical to honor Shelton and Clark.

As a result, four cyclists from CMPD, the Mecklenburg County Sheriff’s Office and Charlotte Airport Police mounted bicycles on May 9, 2007 and headed out from CMPD Headquarters to ride 370 miles from Charlotte to the National Law Enforcement Officers Memorial in Washington D.C.

Twelve years later, the event has expanded to 143 cyclists representing more than 20 law enforcement agencies, as well as a number of non-law enforcement participants, who raise funds ranging from $250 up to $1,500 to qualify for participation in the ride.

The ride follows a 500-mile route over four days, ending during National Police Week in Washington. Cyclists in the event will take part in the Candlelight Vigil at the National Law Enforcement Officers

Memorial after arrival in Washington on Monday evening.

The recent shooting in which Mooresville Police Officer Jordan Sheldon lost his life during a traffic stop served as a somber reminder of the event’s purpose and mission to this year’s participants.

“With what just happened in Mooresville, it has really hit home with everybody this year,” said Harkey, noting his personal connection to law enforcement, brother-in-law Neil Preslar, a state trooper.

“No salary is enough for what they might potentially have to face,” he said.

More information on the event can be found at bike2dc.com, or at nleomf.org.