The Finney family overcomes obstacles in pursuit of education 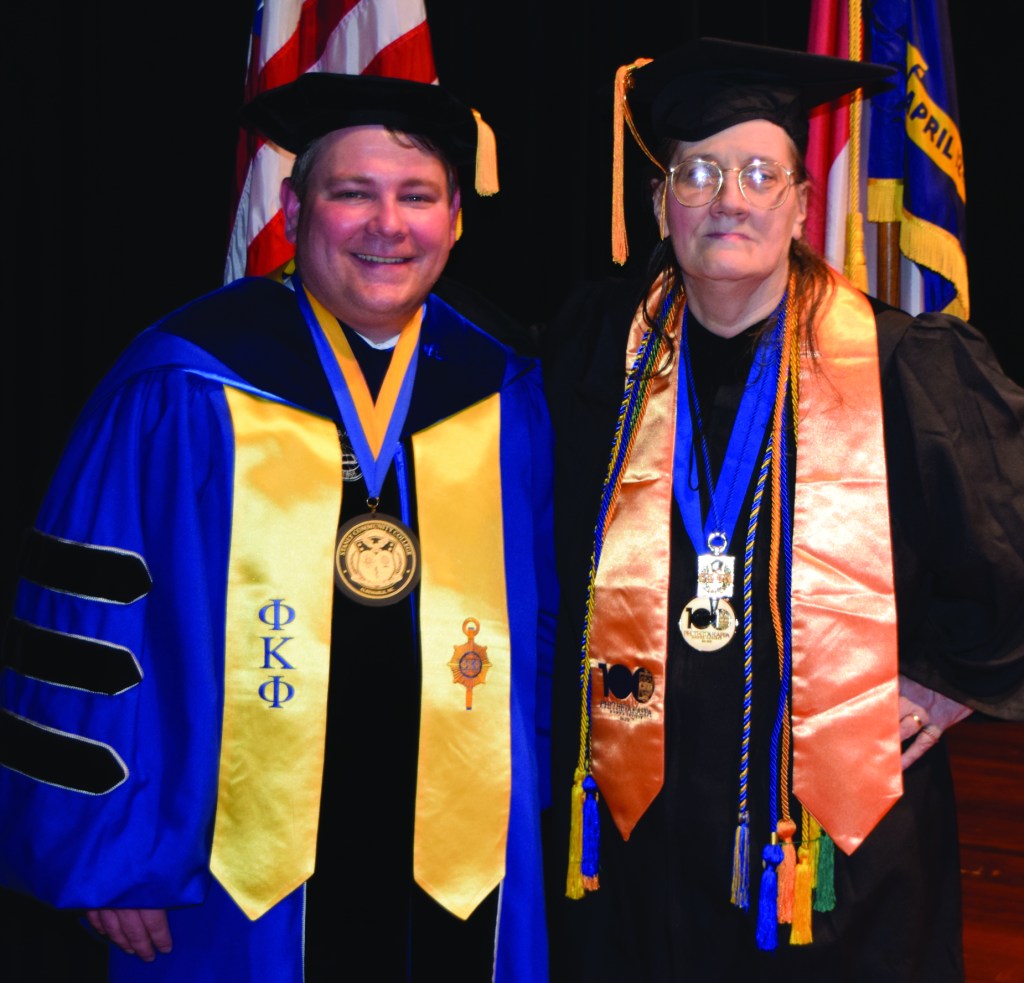 If the Finney family collectively had a superpower, it would be education, and more specifically, degree-completion — even in the midst of life-threatening health scares.

He did this despite being in a coma and on life support for a short time in 2016.

His wife, Barbara, 66, graduated Thursday from SCC with her Associate in Arts and will join Michael at the University of North Carolina at Charlotte in the fall.

She did this despite suffering from congestive heart failure and age-related macular degeneration in one of her eyes.

Dr. John Bowman, English department chairman at SCC, who was also one of Barbara’s professors, said it is rare to see multigenerational families going to school together.

The Finney’s moved to Albemarle from Virginia in 2015.

Michael had lost a one-year software contract and, as he was pondering retirement, the family moved to Albemarle because Barbara had a cousin who lived in the city.

It was at this uncertain period of time Michael started investigating going back to school. He had spent a year at the University of Houston in the early 1970s.

Once in Albemarle, the family researched school options and they chose SCC, each member receiving Pell grants.

After completing the financial aid information and passing entrance exams in the summer, Michael, Barbara and Aurian started SCC classes in the fall of 2016.

Michael has always loved mathematics and he initially worked toward his AAS degree because he wanted to “learn more about electronics and related subjects.”

He took as many math courses at SCC as possible “to eliminate every low level math class possible at UNCC,” he said.

During one semester, Michael was taking 32 credit hours.

With UNCC in mind after he graduated, Michael decided to pursue the Associate in Science degree to eliminate the required courses mandated for the first two years at UNCC. He ended up needing one extra class to receive his Associate in Arts degree, so he received that as well.

He did all this while maintain a 4.0 grade point average.

His favorite courses were any of the STEM (Science, Technology, Engineering and Math) classes. 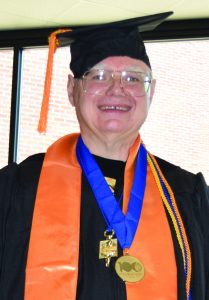 Michael Finney graduated from Stanly Community College and will attend UNCC in the fall. (Contributed)

Michael was so committed to his mathematics courses while at SCC that many school officials nicknamed him “Sheldon,” based on the fictitious theoretical physicist Sheldon Cooper from the hit TV show “The Big Bang Theory.”

Michael is currently at UNCC pursuing his Bachelor of Arts in Mathematics with a minor in Artificial Intelligence.

Once he graduates from UNCC (he is a junior this year), he wants to pursue further education at Carnegie Mellon University in Pittsburgh, specifically its Pure and Applied Logic Ph.D. program.

While at UNCC, he has also created his own logic-based math language.

Unlike Michael’s mathematics pursuit, Barbara “didn’t really have a direction.”

She was originally a pre-med student in college in the 1970s (and was later a respiratory therapist for seven years). She thought about pursuing biology at SCC, but she decided against it.

Barbara initially signed up for the Associate in Science degree but changed it to Associate in Arts for more flexibility.

With a basic arts degree, “you can do anything,” she said. “I know that under the broad umbrella of seeking a B.A. in the arts I can include musical theatre, band and drawing and things like that.”

She enjoyed her humanities courses, especially her English and Humanities classes taught by Bowman.

“She was always deeply engaged in the material and would throw herself into them and would critically think about the information I was presenting her,” said Bowman, who was one of the people who encouraged the family to share their educational story.

Though Bowman only taught Barbara, he was impressed by how the family “consistently and constantly supported each other throughout the entire time they were here (SCC).”

“They are a tight-knit group and it’s quite an exceptional story to me,” he added.

But Barbara is an artist at her core.

She has had musical training since she was a child and has been in several of the Uwharrie Players musical productions. She also wrote newspaper columns at a local paper in Virginia and for several magazines.

“For me, my education will be a blend of science, music and the visual arts,” she said.

Barbara has applied to UNCC’s drawing arts program, but hasn’t heard back about her portfolio admission.

Though she enjoys playing herself, she really likes watching videos of other people play.

Initially homeschooled in Virginia, Aurian had to take the HiSet test, a high school equivalency test, before she could enroll at SCC.

Her favorite courses were the ones that directly related to simulation and game development. She also enjoyed programming courses and her two required English classes.

She will attend UNCC in the fall and will pursue a Bachelor of Science with a concentration Artificial Intelligence and Game Development.

She hopes to design games for mobile devices.

But Aurian doesn’t want to simply develop video games. She wants the games she designs to convey certain messages. 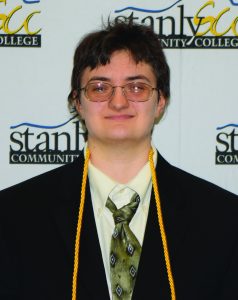 It is important for her that the video games she hopes to develop are “ones that contain diverse representation and hopefully have good accessibility options for gamers with disabilities, physical or otherwise.”

“Mass media can do a lot of good or a lot of harm in how it represents and accommodates people, and video games are no exception to that,” she added. “I want to help make the world a better place for minorities, LGBT+ people, disabled people and anyone else discriminated against or disadvantaged in our society.”

When the family is at home, “we sit at our respective computers doing homework and ignoring each other,” Aurian said.

In addition to all of their classes, each family member was part of SCC’s honor society, Phi Theta Kappa.

But the family’s academic journeys have not been easy.

On the eve of Thanksgiving in 2016, Michael started to get abdominal pain in his stomach. Thinking he could walk it off, he went outside, but when he came back, the pain was still there.

As things got worse, the family took him to the hospital. After three unsuccessful pain shots were administered, along with a CAT scan, it was revealed he had intestinal blockage. Michael went into emergency exploratory surgery.

“I was terrified,” Barbara wrote in an email to the Stanly News & Press.

After the doctors removed “two feet of dead bowel,” Michael was in a coma and on life support for about a week.

“In my career in RT, I had not seen too many patients survive once they went on life support,” Barbara wrote. “I was not too hopeful.”

Eventually the doctors gave Michael a shot to bring him out of his induced coma.

“I saw his eyes pop open and I could see he was still ‘in there,’ ” Barbara wrote.

After he was revived, Michael borrowed a laptop from an ICU nurse and contacted his teachers at SCC. Even in his tired state, he managed to complete his school assignments. Barbara delivered them to his teachers.

“It was a mess, but astonishingly, despite all of that, he still passed all of his classes that first semester with a GPA of 4.0,” Barbara wrote.

Michael was able to get back to school about 10 days later.

It is thought the reason he recovered so quickly is because he has an athletic heart, due to his love for extreme mountain hiking.

Barbara also encountered a health crisis while in school.

Before starting college, Barbara had suffered from severe back problems, but in 2017 she noticed she struggled to breathe walking into SCC.

She reached a point where she couldn’t breathe after walking even 10 feet.

After going to a local clinic, Barbara was diagnosed with congestive heart failure. She took a heart-specific nutrient and after two months, all signs of heart failure were gone.

In addition to some mobility issues, Barbara recently discovered she suffers from age-related macular degeneration in one of her eyes.

She hopes to get a specialized set of glasses that will better help her to see.

The family continues to struggle with financial obstacles.

“It is largely a story about facing obstacles as a family and dealing with them,” Barbara wrote.