During the early 1930s he moved to Albemarle to manage the local Belk department store. After a few years, he and his family moved to Norwood and opened Young Manufacturing. 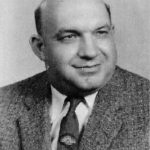 During the late 1940s, Young helped organize a baseball league of industrial teams from Stanly and the surrounding counties. In 1951, he began work promoting youth baseball in the area and led the effort to form an official Little League team in Norwood.

During the early 1950s, Young worked to raise money to begin a football program at Norwood High School. This became one of the few high school football teams in the county.

After the county high schools were consolidated in the early 1960s, plans were made for stadiums at North, West and South Stanly schools.

Young was able to convince county officials to allow local control over the funds for the stadium at South Stanly. He again helped raise money and he recruited many volunteers to donate their time to this project.

At Young’s insistence, a track was included in the stadium, so South Stanly had the most versatile stadium in the county.

Young’s next undertaking was to work with golfer Robert Isenhour to organize and raise money for the building of Piney Point Golf Club. Construction began in the fall of 1963 and it was completed by the fall of the next year.

Young died in 1971 after more than 30 years of service in the community.

In 1972, at the urging of many of his friends, the school board agreed to name the football stadium at South Stanly, K.L. Young Stadium, in his honor.

Young was inducted into the Stanly County Hall of Fame in 2013.