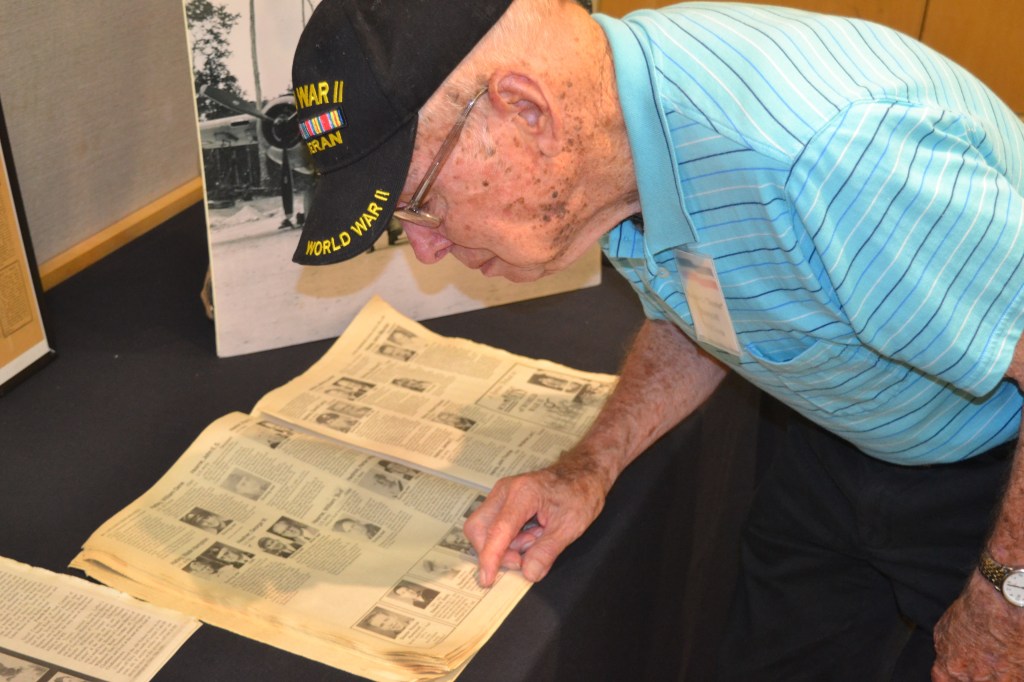 Roscoe “Skeeter” Huneycutt, who served in the Navy during WWII, examines old newspaper clippings about the war.

With Glenn Miller’s iconic 1939 hit “In The Mood” blaring throughout the dining room at CHS Stanly, Stanly County’s World War II veterans were feted during a luncheon honoring their service.

Stanly Community College, in conjunction with the Albemarle Rotary Club, organized the event.

Fifteen WWII veterans were in attendance and each of them took the time to reminisce with each other and enjoy the moment.

L.C. Miller served in the Navy and traveled throughout the Atlantic and Pacific during WWII on the USS Alfred A. Cunningham, a Navy destroyer ship.

He served three years in the war.

“All my buddies left me by himself,” he said when they joined the war.

“I wasn’t going to be by myself,” he added, so he volunteered for the Navy.

Roscoe “Skeeter” Huneycutt was also in the Navy and served on a destroyer ship in the North Atlantic.

“We saw some German submarines, or U-Boats,” he said of his time in the Navy.

One of his prevailing WWII memories was meeting comedian Red Skelton in Washington, D.C.

“It means a lot,” Huneycutt said of the luncheon. “I wasn’t a hero. I just did my job.”

It’s a common sentiment that many veterans share, according to Dr. Michael Taylor, former president of Stanly Community College, who was the keynote speaker at the luncheon. 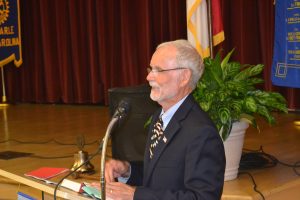 Dr. Michael Taylor was the keynote speaker and, during his time as president of Stanly Community College, personally interviewed more than 110 WWII veterans. (Photo by CHRIS MILLER/staff)

Taylor spoke about how WWII affected everybody.

“WWII touched every state, every county, every big city and every small town,” he said.

Around 16 million Americans served in the war, including more than 300 young men from Stanly County.

Ernest Morton served in the Air Force and kept airplanes flying on the Japanese island of Okinawa. He served about three years.

“I always look forward to this event,” he said, “and I’ve been to every one of them.”

“It’s nice to have people recognize and fuss over me,” said W. Davis Fort, who served in the Army.

“It’s a great thing that the people put this together to recognize the veterans,” added Leon Frederick, who served in the Navy.

Taylor said the veterans were “wise beyond their years” when they returned home after the war “because they had seen so much.”

After Taylor spoke, the North Carolina Singing Americans of Stanly County, under the leadership of Bob Remsburg, sang a variety of classic patriotic songs.

As the choir sang the Armed Forces Medley, each of the veterans stood up to applause when their particular military branch’s song was performed.