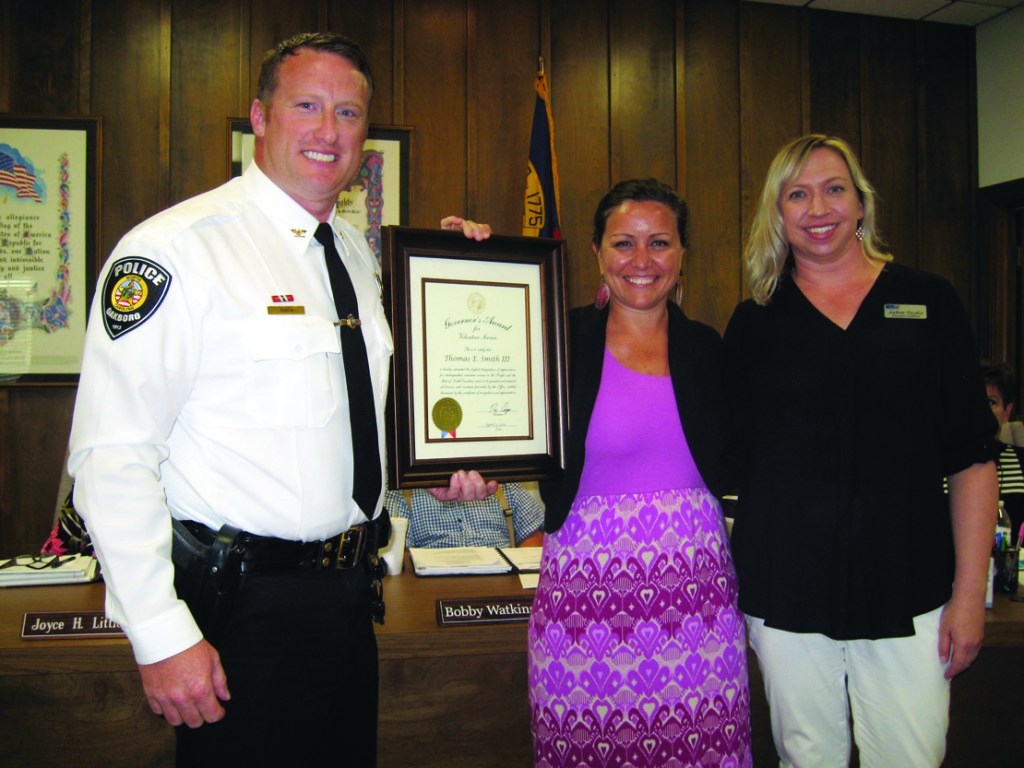 The chief of police also received the Governor’s Award for Volunteer Service.

Chief T.J. Smith told the council he wanted to recognize the work his officers have invested into their careers and communities.

Officer Mark Shue was promoted to lieutenant. According to Smith, Shue has worked in law enforcement for 40 years, spending 32 years with the Salisbury Police Department.

Shue worked as a K-9 handler and trainer while with Salisbury, Smith said. He also has several years of experience teaching Basic Law Enforcement Training class-es.

Shue works part-time with the Oakboro and the Rockwell police departments. Smith said Shue is an “advisor” to him and brings “a wealth of knowledge.”

Officers Bryce Kaus and Jason Eschert were both promoted to sergeant.

Kaus worked with the Kannapolis Police Department for five years before joining the Oakboro department. He has been with Oakboro for about three years, according to Smith. Kaus holds an Intermediate Law Enforcement certificate as well as an Associate’s Degree in criminal justice.

Eschert worked with the Concord Police Department for nine years and for two years with Allied Company Police. He has been employed by the Oakboro department for about a year and, like Kaus, also has an Intermediate Law Enforcement Certificate.

“With his extensive amount of training hours earned, he is coming extremely close to earning the holy grail of certificates, which is the Advanced Law Enforcement certificate,” Smith said.

Smith said Kaus and Eschert will receive additional responsibilities along with the rank.

Smith also promoted Cpl. Matthew Howard and Cpl. David Daigle, noting they had to have at least five years of experience to become a corporal.

Howard has more than twice the minimum experience needed, as he spent 11 years with the Cabarrus County Sheriff’s Office working as a detention officer in the county jail and as a deputy road officer, Smith said.

Daigle also spent a year with the Misenheimer Police Department and has been with Oakboro for about one year.

“We’re lucky as a town to have this amount of experience,” Smith said.

Roscoe said as soon as she heard about the award, she immediately thought of Smith. The chief joined the SECU advisory board when she needed members, presents SECU scholarships to students, participates in “Dancing with the Stars,” promotes autism awareness, works with the Butterfly House and other agencies, Roscoe said.

Roscoe recalled that during the dangers from hurricanes last year, Smith posted his personal phone number on his Facebook profile and encouraged anyone who needed help to give him a call.

“I’m proud of T.J. for his commitment to honor his country, his county and his community,” Roscoe said.

Roscoe was glad to hear he received the award after she nominated him.

“It didn’t come as a surprise to me when T.J. won it because he’s selfless, obviously,” she said.