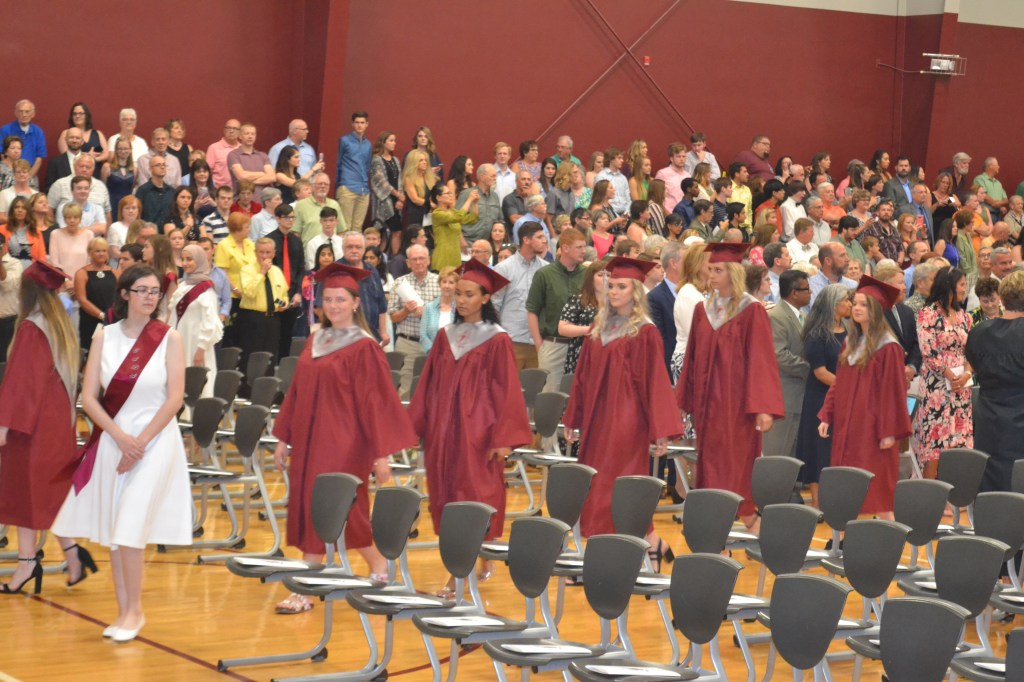 Gray Stone students walk into the gym for graduation.

After four years of challenging academic rigor and countless memories and experiences, the Gray Stone Day School Class of 2019 gathered one last time Friday night in the gym for graduation.

Seven counties were represented in the class of 106 students.

These students earned almost $3.5 million in scholarships, which is likely the most of any graduating class at Gray Stone ever, said Helen Nance, chief administrative officer at the school.

Almost 100 percent of the students are planning on attending college next year, at universities including UNC Chapel Hill and Duke.

The class has provided more than 4,400 hours of community service, Nance said, volunteering their time at schools, churches and many nonprofit organizations.

Gray Stone has meant so much to so many of the students.

“I’ll miss all of the friendships that Gray Stone allows you to make with everybody,” said DeeAnnah Brantley. “You get to know people from different counties so you’re not just stuck in a bubble.”

Peyton Hatley of Aquadale will miss her teachers.

“I’ve formed a lot of good bonds with them and I’ll miss seeing them every day,” she said.

Ayah Hajjar, who’s originally from Syria, commuted 45 minutes each day from her home in Charlotte to Gray Stone.

“I met a lot of amazing people here,” she said.

Though the environment was challenging, “it got me to where I am right now.”

“I’m really glad I came here,” said Hajjar, who will attend Central Piedmont Community College. She wants to be an architect.

Dr. Colleen Perry Keith, Pfeiffer University president and the keynote speaker, talked about cherishing the time spent with friends and loved ones.

“Living close to the people you love matters, priorities matter and quality time matters,” she said.

While she challenged the students to open their lives to new people and opportunities, she reminded them to “cherish and focus on relationships with those whom you love and who love you in return. Make them the priority and give them your attention.”

James Emery Culp was awarded the Board of Directors’ Scholarship while Bonnie Showfety was recognized as the 1,000th Gray Stone graduate.

“As we graduate the question is no longer to be or not to be, but it is instead what to be, how to be and who to be,” said student Joseph Clark. “The question that lies before you is the new chapter of your life.”

Shortly after, the students walked across the stage and received their diplomas, threw their mortarboards in the air and left Gray Stone for life’s next adventures. 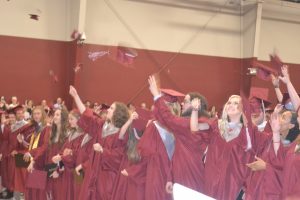 Students throw their mortarboards in the air after receiving their diplomas.

They had seized their day — they graduated.