Keith reflects on time at Pfeiffer 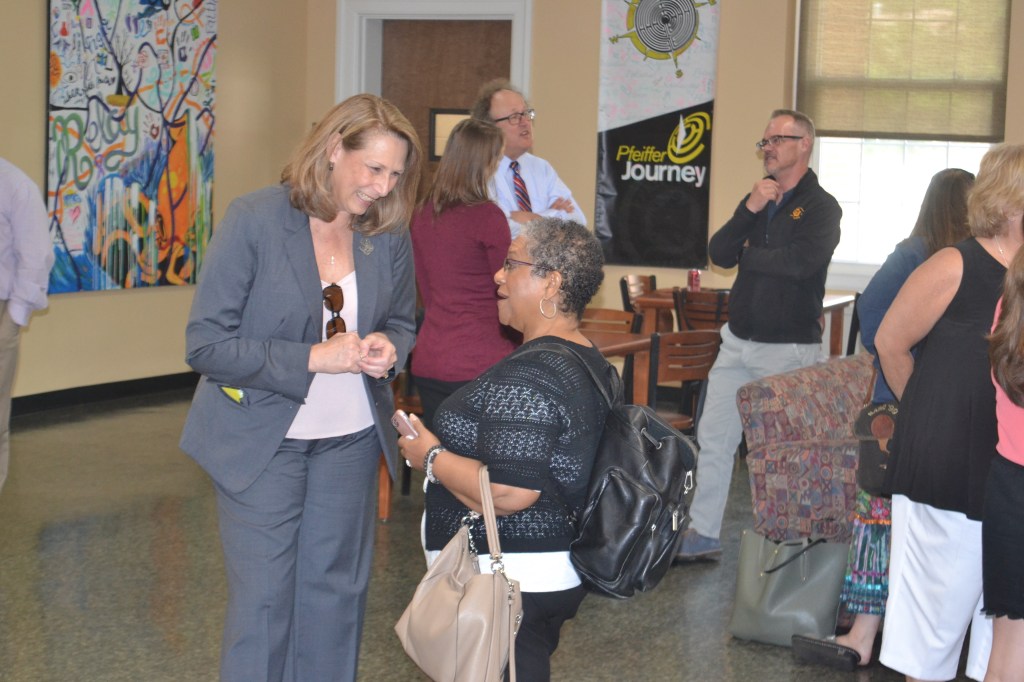 Dr. Colleen Keith greeting Marilyn Sutton-Haywood, dean of the Division of Arts and Sciences, at her farewell ceremony a few weeks ago.

As Pfeiffer president Dr. Colleen Perry Keith prepared to leave the university, she reflected on her time with Pfeiffer and what was ahead.
Keith became Pfeiffer’s 10th president and first female president in July 2015.

“We had to really do some careful looking at what is Pfeiffer’s future and how are we going to create and live it to that future,” she said.

It was during these early stages that the seeds for the graduate health science programs were planted. (The Physician Assistant program was approved prior to Keith’s arrival, she said, and the money came from the Pfeiffer Research Foundation.)

Keith said she is proud of helping to create the graduate health science campus in downtown Albemarle that will open around the beginning of May 2020. Around 200 graduates a year will occupy the campus.

Even though she will not be here to see the fruits of her labor, Keith believes the health sciences programs will have a tremendous effect on the community.

She hopes the graduate campus will help the college be present in the community and help encourage younger generations of people.

She hopes Stanly County Schools students will take tours of the new facility so they can “start seeing people who look like them and come from the same kind of background as them — and they’re going to say, ‘Wow, I can do that,’ ” she said.

“We’re at a point where I think Pfeiffer and Albemarle and Stanly County can actually solve the rural health crisis,” she said, in regards to hospitals closing in rural communities across the country. “I think we stand a good chance of being able to positively impact that.”

“Athletics has been the icing on the cake for us,” she said, “because it provides campus life, it’s a great recruitment tool and we do pretty well.”

The baseball and softball teams each just won the ECAC national tournament.

The transition helped to increase enrollment, she said, because there are more people eligible to play at the Division III level than the Division I and II levels.

“By making that move, that helped us to be able to increase enrollment at the undergraduate side,” she said.

Keith will miss the intimacy of the university — and also the county.

“I’ve often thought that this area between Pfeiffer and Gray Stone…is really an educational oasis,” she said.

This seems to resonate with a lot of students, she said.

Keith enjoys watching students arrive on campus and eventually meet friends and carve out and “create communities” and “their own environments.”

She has enjoyed that people in the county “just accept you as you are and let you go be who you are.”

Keith will most miss the people she’s gotten to know while at Pfeiffer.

“It’s always the relationships and the people,” she said. “That’s always what you miss.”

The 2019 graduation was extra special for her because she started her Pfeiffer career with the students four years ago.

She said if she didn’t know all the graduating class, “I knew probably 99 percent of them.”

She and her husband — the “First Dude” Barry Keith — will miss their frequent walks around the perimeter of the campus.

“This is a really good place to walk,” she said.

She definitely won’t miss the train and how — sometimes when the tracks are being worked on — the train will run at night and inevitably blow the horn at every crosswalk.

One of her major regrets about her time at Pfeiffer?

As much as Keith has enjoyed her time at Pfeiffer, a series of events led her to accept the position as president of Goldey-Beacom College, a small private school in Wilmington, Del.

Her son Tim, who lives in Washington, D.C., was recently diagnosed with a health condition, and she rarely gets the chance to see her parents, who are both in their mid-80s and still live in her hometown of Parish, N.Y. Her father also has an inoperable heart condition.

The Goldey-Beacom campus is only about two hours to D.C. and less than five hours to Parish.

She also feels she can leave knowing Pfeiffer is in a good place.

She added that where Goldey-Beacom’s needs are matches where her strengths are.

Keith said her role as college president and mother can sometimes be “a blurred line” that she struggles to navigate.

She has seen herself as a mother-figure not just to the many Pfeiffer students that she regularly is in contact with, but the university as a whole.

She came to Pfeiffer and worked to “raise the college and did the things needed to fix it move it ahead.”

As a president, she said, “you try and make decisions that are going to be life-giving for the institution, just like you would for your kid.”

She said new Pfeiffer president Dr. Scott Bullard, who was interim president of Judson College in Alabama, will have different strengths than her, but that it will be good for the university.

“We’re different enough to where it will be fun I think for a lot of people because he will have a different approach,” she said. “I think he comes in and brings what Pfeiffer needs.”

“I would love to see in five or 10 years Pfeiffer live in to whoever it is Pfeiffer wants to be at that point,” she said. “Pfeiffer has to be its own institution.”

She hopes the graduate health science program takes off and produces “some amazing medical professionals.”

Keith plans to come back and visit someday.

And as Keith prepares to head to another academic adventure, the community she’s leaving will miss her.

“Colleen has been a great visionary for transforming Pfeiffer,” Pfeiffer Board Chairman Bob Brietz said. “We will see signs of Dr. Keith’s legacy for many, many years to come. She was successful in reconnecting Pfeiffer with Albemarle.”

Regarding Keith and her family: “They will all be missed,” Brietz said.