A Gold Hill man faces charges as a suspect in multiple bank robberies, including ones in Albemarle and Locust. 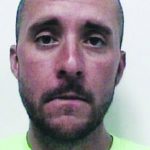 The investigation is ongoing and additional charges are anticipated, according to Locust Police Department. McHone is in the Davidson County Jail awaiting a June 10 court appearance.