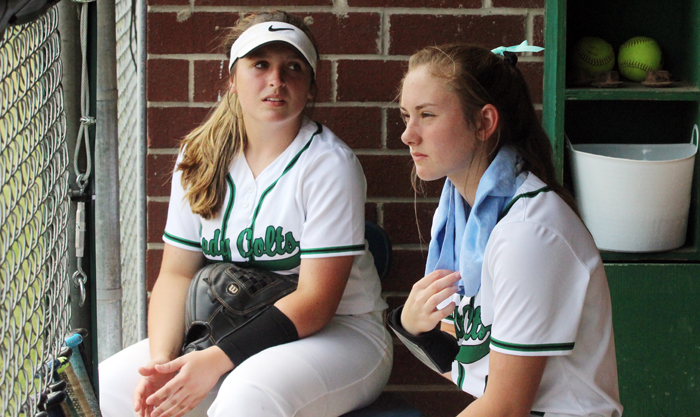 Jordan Hatch (right) rests in the dugout with freshman Ashlyn Hughes before Saturday’s game. The Colts will take on Eastern Randolph in the 2A state finals wrapping up this weekend. (Photo by Charles Curcio)

The award, which recognizes not only outstanding athletic excellence, but also high standards of academic achievement and exemplary character demonstrated on and off the field, distinguishes Hatch as North Carolina’s best high school softball player.

She is now a finalist for the prestigious Gatorade National Softball Player of the Year award to be announced in June.

An All-State honoree, she was the 2019 Rocky River Conference Pitcher of the Year.
Hatch has volunteered locally on behalf of the Special Olympics, the Salvation Army and youth softball clinics.

Hatch has maintained a 4.0 GPA in the classroom. She will begin her junior year of high school this fall.

As a part of Gatorade’s cause marketing platform “Play it Forward,” Hatch also has the opportunity to award a $1,000 grant to a local or national youth sports organization of her choosing. She is also eligible to submit an essay to win one of twelve $10,000 spotlight grants for the organization of choice, which will be announced throughout the year.

Since the program’s inception in 1985, Gatorade Player of the Year award recipients have won hundreds of professional and college championships, and many have also turned into pillars in their communities, becoming coaches, business owners and educators.