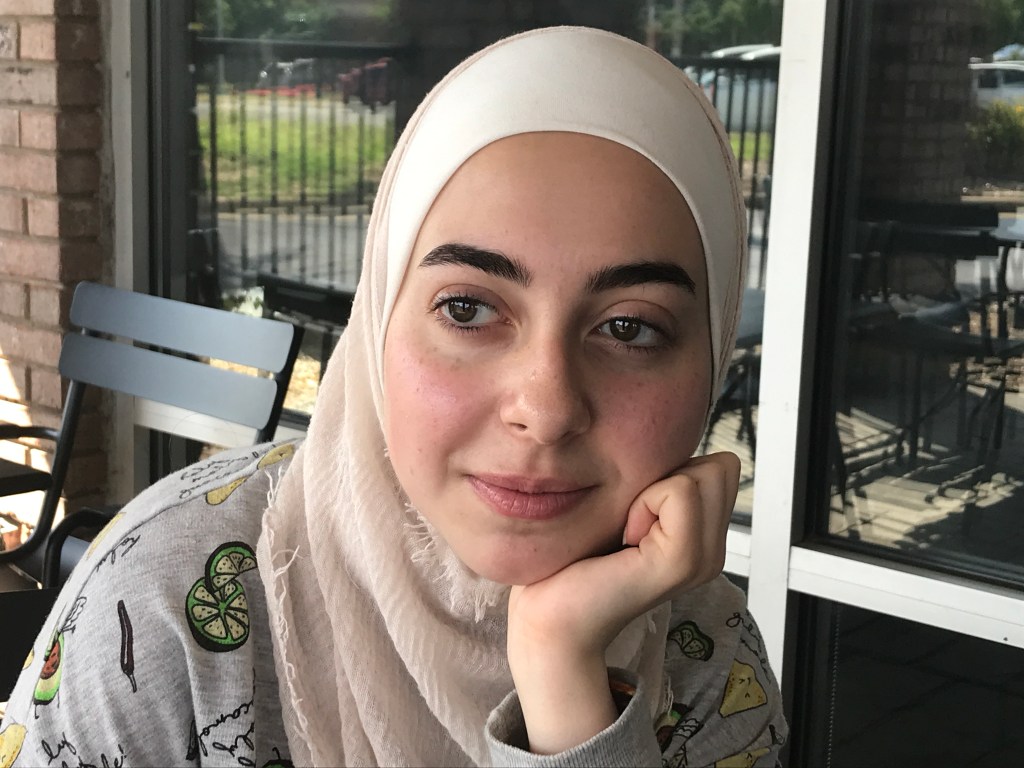 Ayah Hajjar is planning on pursuing a career in architecture.

Ayah Hajjar has lived a unique and worldly life.

During her 18 years, she has learned — and relearned — languages. She has adapted to life in two countries.

“I’m an outsider in both countries” where I’ve lived, she said.

But it’s by standing out that Hajjar, a Syrian-American who graduated from Gray Stone Day School last month, has discovered herself.

Born in Boston and raised in Charlotte, Hajjar and her family moved to Damascus, Syria, when she was 6 around 2007.

She didn’t know Arabic, and though her family is from Syria, the country was unfamiliar to her.

During first grade, all of her classmates spoke Arabic, but “it was all gibberish to me,” she said.

In the process of learning to speak Arabic, Hajjar began forgetting how to speak English.

Life in Syria was not easy for Hajjar.

She struggled to make friends and fit in.

“A lot of people just viewed me as an American girl,” she said, adding she initially didn’t get along with a lot of people.

The unstable environment around Hajjar also made it difficult for her to find her footing.

During her time in Damascus, the Syrian Civil War erupted and the terrorist group ISIS rose to power. There was a constant worry in Syria about her family’s safety in Syria.

Because of the safety concerns, “I didn’t have much of an outside life,” she said. “We didn’t go out much, we had to stay at home.”

But even with these concerns, once Hajjar learned Arabic and settled into her new home, she made friends — many of whom also came from America — and adjusted to her life.

But as she became used to life in Syria, her family decided to return to the United States.

After she finished middle school, her family moved to Harrisburg in 2015. They did so in part because her father got a new job, but mainly because it had become too dangerous to live in Syria, where she lived for about eight years.

Even before her family moved to Syria, her mother had friends whose children went to Gray Stone Day School, so Hajjar’s family held the school in high esteem. Even though Hajjar had never visited the school and even though she lived about 45 minutes away, her family decided she would go to Gray Stone.

Hajjar arrived in Harrisburg five days before the start of her freshman year.

“I knew nothing about the school,” she said.

She said commuting 45 minutes to school each day was a major adjustment. The most time it took her to travel to school in Syria was 10 minutes.

“It felt like hours,” she said of her daily trip. Luckily, she made a playlist of songs (especially reggae and folk music) that helped her “not to get bored” while commuting to the school each day.

Once Hajjar, wearing her hijab on her head, walked into Gray Stone the first day, she again felt like an outsider.

She noticed people were staring at her and she began stuttering. She also cried the first day.

But similar to her time in Syria, as the months passed and as she relearned English, she became more comfortable and made friends.

It helped that Hajjar had a group of upperclassmen Muslim students who helped her adjust to life at Gray Stone. The students, who all lived in the Charlotte area, would carpool to school with Hajjar. She would also eat with them at lunch and they became good friends. She knew four of the upperclassmen since she was a young girl before she left for Syria.

“They sort of understood me,” she said. “In a way, they’re still different even though they grew up here.”

Though Hajjar was the only Muslim student in her class, there were as many as 11 at one time during her four years at Gray Stone. Now that she’s graduated, she said there’s three Muslims still at the school.

She had to adjust not just to a new school life but to life in another country with customs different than those in Syria.

“So whenever people would smile at me in the hallway, I’m just like, ‘Why are they smiling?’ ” she said.

There was also a learning curve when it came to her classes.

The subject matter Hajjar learned in her middle school classes in Syria was not the same as what her fellow Gray Stone students learned in their respective middle schools.

Her teachers would tell the students, “Oh you learned this concept in middle school and I’m like, ‘I didn’t learn it in my middle school,’ ” she said.

Hajjar views her nomadic life as helping to shape the person she is today.

Though she was shy when she was younger, moving around the world has “forced me to become social.”

But as she became more comfortable at Gray Stone, her shyness gave way to an outgoing persona.

By her junior year, she said she knew everybody in her class. She said Gray Stone helped her become more outgoing.

At school, most people knew her as “the Muslim girl” — but that wasn’t necessarily a problem for Hajjar.

“I guess a lot of people liked me because I was different,” she said.

And Hajjar would play up her differences. She actively encouraged people to lightheartedly make jokes about her — especially her looks and her Syrian background.

For example, Hajjar’s friends would comment that she couldn’t roll up her sleeves and show even the tiniest bit of skin “because there’s boys around,” she said.

Her outgoing nature had an impact on the students and staff.

“She only sees the good in things and people,” said Sarah Ince, the school’s college counselor. “Stanly County couldn’t be more unlike where she was raised, yet she loved her time at Gray Stone and was adept at making connections with her peers.”

Finding herself through art

During all of her traveling, Hajjar’s love for art was always present. She began painting at 8 and drawing five years later.

“I love to express myself on paper,” she said.

Even when she was shy and hesitant to talk to people, “I would love to sit down and draw.”

Students and staff at Gray Stone knew Hajjar because of her art, she said. She took art classes during her sophomore and junior years.

“She is a phenomenal artist,” Ince said. “When she is drawing or painting, she is in her element.”

She is inspired by nature and enjoys painting and recreating what she sees from nature photographs.

One of her paintings — an untitled portrait of several white, snowy trees alongside another tree ablaze with a bright orange and yellow fire — was recently featured in the Stanly Arts Guild alongside other Gray Stone artwork.

“My painting, featuring a singular flaming tree amongst a grove of uniform, snowy trees, is representative of the diverse life I have lived,” she said. 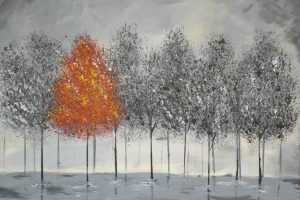 Hajjar’s painting was featured in a display at Stanly Arts Guild.

Art has become an outlet that has allowed Hajjar the freedom to express herself and her ideas.

“When I moved to Charlotte from Syria at age 14, I felt as though I was so much different from all of my neighbors and peers,” she said.  “After returning to the United States for the first time since I was 6 years old, I decided to use my artistic talents to embrace my diversity; the cultural differences were an excellent muse, and a great opportunity to showcase my skills.”

“An artist is who I am,” she said. “I can’t think of myself as anything else.”

And she won’t have to, because she plans on majoring in architecture. She will attend Central Piedmont Community College in the fall and hopes to transfer to a four-year college, either N.C. State University or UNC Greensboro. She was inspired to pursue a career in architecture at an early age, after several of her cousins in Syria became architects.

“I would see what they would do and it really did interest me,” she said.

Hajjar loves the process of designing things and she said she can’t wait until she designs projects of her own. She’s hoping to eventually design her own house.

Hajjar feels that during her time at the school, she helped make Gray Stone more diverse.

Once students got to know her, they would ask her questions about her religion and about her background. They even began looking into Islam and Syria for themselves.

And Hajjar was more than happy to oblige.

“I love when people ask me questions,” she said.

“Just me being there taught them about other countries,” she added.

She describes her life as a roller coaster, filled with many ups and downs.

“I enjoy it though,” she said. “The ups and downs happen to everybody, you got to just go with it.”

As Hajjar looks back on her time at Gray Stone, while she’s happy she graduated, she will miss her classmates and teachers.

It still hasn’t set in that her time at the school has come to an end.

“I still feel like I’m going to Gray Stone next year,” she said.