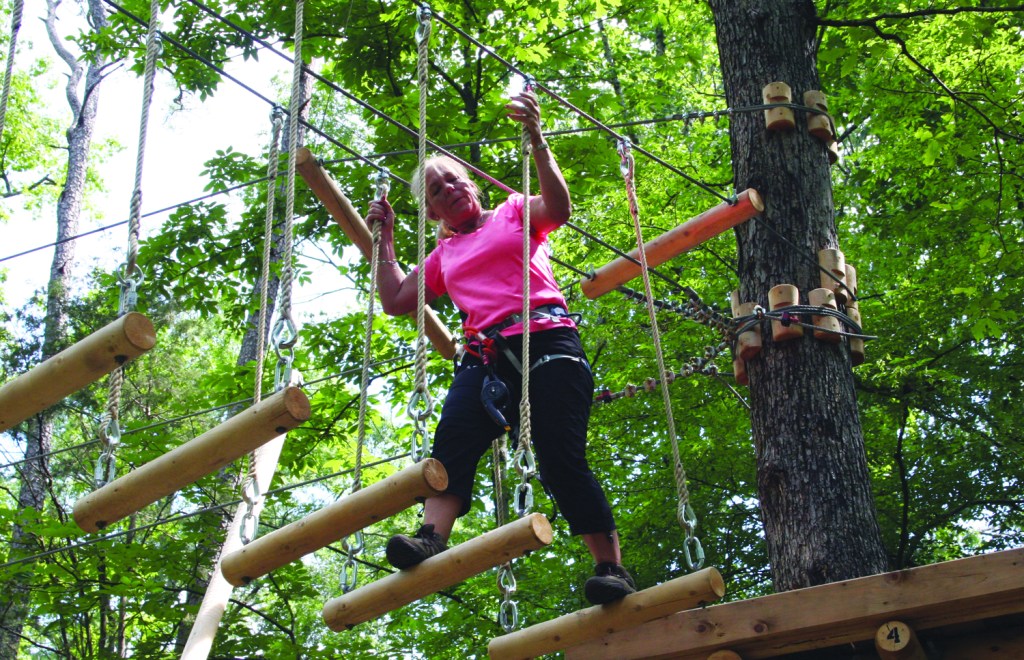 Outdoor enthusiasts in Stanly County and surrounding areas — including those who’ve dreamed of flying through the jungle like Tarzan — may enjoy a new business in Albemarle.

Owner and operations manager Ken White is excited about bringing the adventure challenge to Stanly.

White is a former high school teacher and principal who grew up outside New York City. He has been on several treetop courses and thought it would be a good idea to create one of his own. He just had to find the right area.

As he was driving around with his fiancé looking for good land, they stopped to walk the greenway at Rock Creek and noticed the forested area would be an ideal place for his park.

“The topography was right and the trees looked good,” White said.

Albemarle was also the destination due to its proximity to Morrow Mountain State Park and the Uwharrie National Forest and to cities like Charlotte, Winston-Salem and Greensboro, he said.

The course also would not be in direct competition with similar businesses, he said, because the closest facility with an aerial park is the National Whitewater Center in Charlotte.

Albemarle Parks and Recreation is renting the southern section of the park to Carolina Treetop Challenge in exchange for certain percentages of the business’ profits. The park’s greenway will not be affected.

Earlier this year, Treego Parks, an international designer of ropes courses, inspected, tested and trimmed the trees and designed the blueprints for the course.

Outplay Adventures, an aerial park developer that operates seven parks around the country, began building the courses in February, White said. The entire course takes up about four acres of the park, he said.

There are five rope courses for adults and one for children. Similar to ski slopes, each of the courses gradually increase in difficulty and height and will challenge climbers mentally and physically. It will take about two to three hours to complete all five courses, White said.

Each course will have obstacles (hanging ropes, a wooden barrel, zip lines, swaying bridges) that will challenge strength and balance. The six courses feature about 70 obstacles, White said. 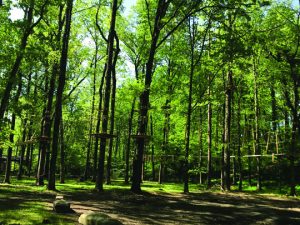 For safety purposes, people will wear harnesses at all times and will always be double-hooked to a steel cable. White also plans to have water available after each course.

Before they begin the courses, people will learn about the rules and safety regulations and will sign a liability waiver. They will also walk through a practice course before embarking on the real ones.

For additional safety, the staff will check the courses every morning before people arrive.

“It’s a pretty fine-tuned machine when it comes to safety,” White said.

A training was held in May, where an official from Outplay Adventures (who is certified through the Association for Challenge Course Technology) taught the staff about the proper use of equipment, safety course management (including techniques involved in rescuing people) and customer service.

Though anyone is welcome, White hopes he can attract groups, such as Boy Scout troops, corporate groups, churches and clubs.

White plans for the Treetop Challenge to be open seven days a week. The business has a website and once the challenge opens, reservations would be encouraged, White said.

“We want to give people a challenge to feel good about themselves,” he said. “It’s another form of physical fitness and recreation and it gets people outside.”

He compares completing the courses to the pleasures people get after exerting themselves on a long run or hike.

“When you get done, you feel like you’ve accomplished something,” White said.

White hopes people will push themselves and learn more about their abilities.

People can buy tickets and make reservations by visiting carolinatreetopchallenge.com.