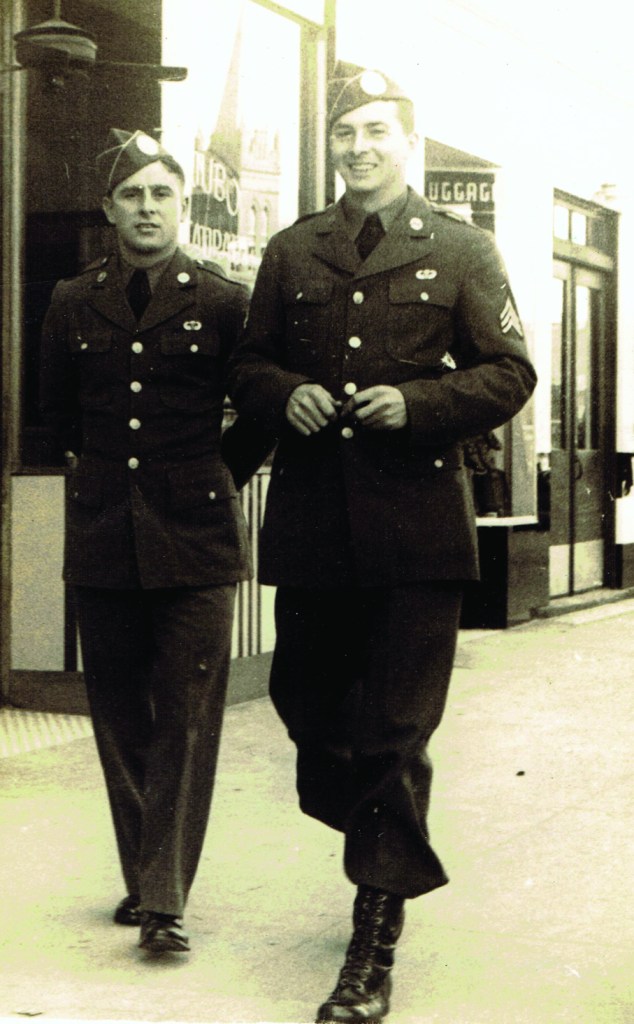 James Morris Irvin, right, is shown while in Officer Candidate School at Fort Bragg in 1942. After attending OCS he was commissioned a lieutenant and served as a company commander for the 505th Parachute Infantry Regiment of the 82nd Airborne Division. Irvin was captured by Germans on D-Day in Sainte-Mère-Eglise, France, the first city considered liberated by the Allied air invasion. Irvin later escaped with a couple other soldiers as troops were being transported back to Germany. He returned to England and was able to jump in the invasion of Holland later that year. After the war, he operated a sales agency and later a business in Norwood. Many of his relatives remain in the area. Irvin died Dec. 4, 2009 at age 90. (Contributed by JEFF IRVIN)

Thursday marks the 75th anniversary of the Allied invasion of Normandy, France to fight Nazi Germany during World War II. More than 9,000 Allied Soldiers were killed or wounded in the invasion on June 6, 1944.

On the first Saturday of June 1944, I woke to find our normally empty street crowded with army vehicles.

Very quietly during the night, unseen drivers had parked jeeps, guns and tanks on either side of the narrow road. 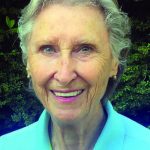 When my friends and I ran down the alley to play in Spencer Gardens, we found the same thing had happened to all the other streets in the neighborhood.

We were fascinated, particularly when we discovered the wonderful gummy stuff around the vehicles’ joints and hinges. We stuck our fingers in it, made impressions of our hands and traced our initials. There was no one to tell us not to. No soldiers stood on guard.

On Sunday morning there were even more vehicles.

I told my mother about the gummy stuff.

She looked at me with what I called her meaningful expression. “It’s waterproofing.”

The grown-ups had guessed what was happening.

“This is it,” they told one another in low voices.

Although they didn’t tell us what it was, we children knew they meant the invasion. We were very familiar with that word. We’d been living under the threat of it for four years, and we knew that this time it didn’t mean Hitler was invading us.

In those few days, a hush fell over Bournemouth.

The Americans who’d filled the pubs and cafes for the last months had disappeared. There was hardly any traffic except for a few big yellow trolley buses that rolled down the main streets.

I don’t remember anyone discussing what was obviously about to happen. Loose talk loses lives, the posters said, and the secret was kept behind the blackout-curtained windows and high hedges of our town.

What we didn’t know was that the entire section of our coast had been sealed off from the rest of the country, and we couldn’t have told anyone what was happening if we’d wanted to. The mail, railways, roads, long-distance telephone calls and every other form of communication had been frozen.

By Monday morning, there wasn’t a space left to park even a bicycle on our street. I walked to school past the long lines of vehicles and when I reached the playground one of my friends yelled, “Go and look at the sea.”

I ran the short block to the cliff edge and stared in amazement.

To the east, silhouetted against the white cliffs of the Isle of Wight, larger ships rode to anchor.

To the west, the narrow entrance to Poole Harbor spewed out destroyers and gunboats to anchor off the Purbeck Hills. I stood and watched until I was almost late for school.

It was hard to concentrate on arithmetic and French and history that day. The tension in the air was almost palpable.

On the way home, I hesitated beside a jeep and looked around. No one was watching.

I’d seen Queen Elizabeth christen a ship on a recent newsreel and now I puffed out my skinny chest, pressed my thumb in a particularly gummy joint and said in a high cultured voice, “God Bless This Jeep and All Who Sail in Her.”

During the night I woke to the drone of aircraft. Heavy with sleep, I thought they must have forgotten to sound the air raid siren.

The nightly progress of waves of airplanes had changed direction in recent months. German bombers no longer flew over us to bomb the northern cities.

Now, ours flew over to bomb German cities, to return in the early hours of the morning. This must be an especially big raid, there were so many. The steady thrumming went on and on and eventually lulled me back to sleep.

Next morning I stepped out of the front door and walked down the path as I struggled into the straps of my satchel.

At the garden gate I stopped short. The street was empty. A few patches of oil were the only evidence that there’d ever been anything there.

I ran down the road and on past school to the cliffs. There was not a ship in sight. The gray choppy waters of the Bay stretched away to the horizon, cold and empty under a lowering sky.

In my classroom, I curled my feet under my desk and carefully wrote the date at the top of my composition notebook: Tuesday, June 6, 1944.

I chewed the end of my pencil and gazed out the window. It seemed wrong to have to sit in school as if it were an ordinary day. I looked at the sky. It was threatening, gray and chilly. I wondered where my jeep was.

Bridget Huckabee was 11 years old at the time of D-Day. A native of England, she married a Stanly County native and came to live in Albemarle in 1961. She later became an American citizen. A Badin resident since in 1994, Bridget is now 86.