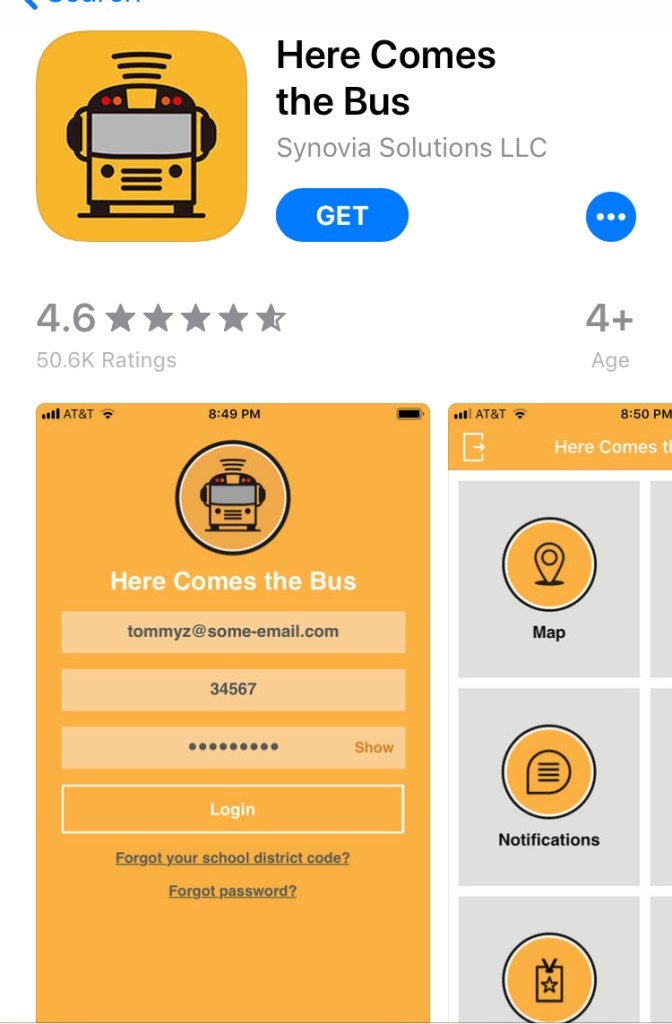 A display of the Here Comes the Bus app.

Stanly County Schools is piloting a new app at Millingport Elementary that helps address the issue of student safety while waiting for the bus each morning.

Titled “Here Comes the Bus,” the free app allows parents to track when the buses — which were all equipped with GPS last year — arrive to pick up their children. Parents can set the bus range from 50 feet up to two miles.

The app sends parents an email or a push notification on their phone three to four minutes before the bus arrives in their targeted range, Superintendent Dr. Jeff James said. That way, once students arrive at the bus stop, the bus will be there to pick them up. If for any reason the bus doesn’t show up or is late, the parents receive a message.

SCS introduced the app to Millingport Elementary. It is part of a series of safety initiatives recently implemented, including adding more security cameras and introducing the LobbyGuard visitor information system into the schools — thanks to the quarter cent sales tax.

“We wanted Millingport to work it out to see if there were issues we weren’t aware of,” said Todd Bowers, SCS director of facilities and maintenance.

SCS was driven to find a way to better protect students at the bus stop after last year’s kidnapping and killing of a Robeson County middle school student, who was heading to the bus stop.

“Safety no longer is in the school building, safety has landed and begins at the bus stop,” James said during a recent school board meeting.

“As the principal of Millingport Elementary, it has given me peace of mind knowing that at anytime I can go into the app or website to verify when students have been picked up or dropped off by the bus,” Megan DePasquale added.

Parents have also been enthusiastic about the app.

“Not only does this give me security as a parent knowing where my kids are, but the app also allowed me to find my children this week when the bus broke down and [I] needed to pick them up,” said Ashley Quesenberry. “I’m so thankful Stanly County is always looking for ways to improve learning, security and even bus transportation.”

“I love it,” said bus driver Amanda Starling. “It has cut down the time that students are having to wait outside for me. They are able to know exactly when I am coming to pick them up.”

SCS hopes to introduce the app to all the schools next school year.