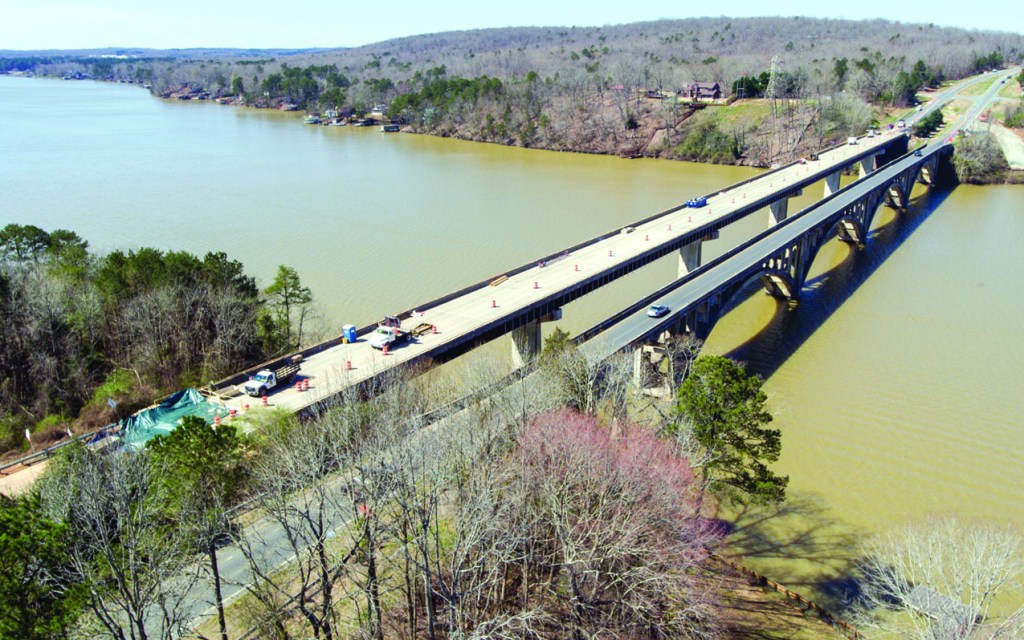 Demolition of the Swift Island Bridge is underway.

Craig Minkler, the engineer in charge of updating the bridges over Lake Tillery, gave a presentation about the work being done to the bridges during an informal talk at Speckled Paw Coffee in Mt. Gilead Saturday.

Minkler is with PCL Civil Constructors Inc. of Raleigh., which was award the $20.1 million project by the N.C. Department of Transportation in November.

The company is working with the NCDOT, Duke Energy, AECOM and others to complete the bridge portion of the project that is widening N.C. Highway 24-27 to Albemarle.

It is responsible for rebuilding the Swift Island bridge over the Pee Dee River and extending the service life of the newer bridge.

“We’ve been raising the newer bridge. We replaced the bearings. The bearings are what the actual steel girders, the beams, sit on. They’re basically just layers of rubber and steel stacked up with plates bonded to each side. That’s so that if there’s ever an earthquake, it allows the bridge to shake freely above the foundations. It’s a way to protect the foundations from cracking.”

The bearings also allow the bridge to vibrate and keep its structural integrity when large trucks cross over it.

“We put a new overlay system on there. Rather than concrete, we put this very specialized material — it’s called PPC — and it’s basically an epoxy resin with sand rather than cement, so it’ll last for quite a while,” he said. “Now there is one lane each direction on that bridge.”

“As of Thursday we actually took out the first couple pieces of the bridge, just the barrier walls so far,” he said. “We are going to be removing that bridge down to the arches.”

Minkler said the bridge replacing the Swift Island bridge will be 100 feet longer, have additional foundations, new columns and a new deck.

“Right now the bridge is 23 feet wide, but it will be 39 feet and four inches or so wide — big enough for two lanes with some big shoulder on the sides,” he said.
Minkler added it will stand about as tall as the eastbound bridge.

“If you’re out in the water pretty often, which it seems like a lot of people are, you probably noticed last week we put out our buoys,” he said. “Two hundred and fifty feet on either side of both bridges is the no wake zone.”

“We’ll always have one channel of the bridge open, but the other three will always be closed,” he added. “If guys are working on a floating platform and trying to do something it’s very dangerous for them, especially later on when we’ll have cranes out on the water. We just want to make sure people are going slow through there.”

The plaque on the Swift Island bridge will be incorporated into the bridge replacing it.

Construction on both bridges is set to be completed by December 2020.

Braidyn Davis is a freelance contributor for The Stanly News & Press.