“You all made ‘good old boy’ appointments tonight,” said an agitated Commissioner Bill Lawhon in scolding four of his fellow Stanly County commissioners near the conclusion of Monday’s regular meeting. 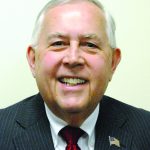 Lawhon’s comments were in reference to a 4-3 vote to add former commissioners Joseph Burleson and Gerald Efird as members of the Stanly Community College Board of Trustees.

Following the nomination of Burleson and Efird by Commissioner Ashley Morgan, Lawhon observed that both Efird and Burleson already serve on other appointed boards.

“We don’t need to close nominations yet,” interrupted Lawhon before an attempt to do so could be brought to the floor.

“Should we be appointing members to these positions who are already serving on other groups?” he asked, noting 20 applicants had expressed a desire to serve on the SCC Board.

“We need to involve as many different people as possible, and not just be nominating our friends and buddies,” he continued.

Lawhon then submitted the names of Doug Hughes and Dr. Gerald Poplin for consideration.

“Stanly Community College has recommended Mr. Hughes for nomination, and he has been extensively involved with the Electric Lineman Technician program there. And Dr. Poplin has taught both at Pfeiffer and in the community college system,” added Lawhon.

“What you are telling the voters tonight is that you just want to load up appointed boards with a very select few,” he admonished. “I’m very disappointed in your decision.”