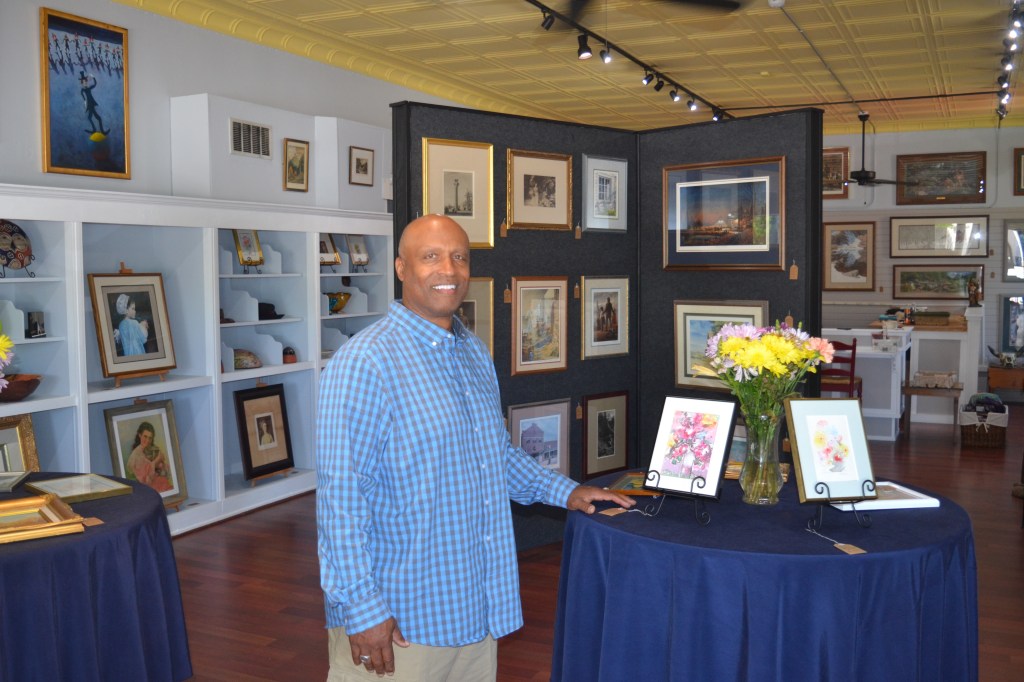 It’s hard to describe Tony’s Art Joint because it has so many unique art pieces.

The gallery, which opened recently at 102 S. Second St. in Albemarle, has original watercolor and oil paintings, Native American paintings, lithographs, etchings from the 1800s, African art (including numerous masks), ceramic pieces, quilts, furniture and Precious Moments dolls. The prices range from pieces in the low hundreds to pieces in the thousands.

Pernell is a retired high school art teacher, who worked 35 years in Indianapolis. He also taught watercolor painting at the University of Indianapolis.

He’s been in Albemarle for two years and enjoys the slow pace of life compared to Indianapolis.

This is Pernell’s first art gallery.

His pieces are “a collection of things I’ve been accruing over the years.” He does have one of his watercolor paintings in the gallery and his wife has a multicolored quilt made out of neck ties.

He credits his passion for a wide range of art to his childhood growing up in Germany while his father was in the military. He said Europeans emphasized the importance of exploring museums and castles and other artistic places. His parents would even take him to flea markets in France.

Art appreciation “is woven into the European fabric,” he said.

Pernell grew up with a love for drawing — especially comics — and, through encouragement from his seventh grade art teachers, he discovered he wanted to teach others about art.

Pernell tries to collect pieces he would hang up in his house.

He spent around 15 to 20 years shopping at auctions for art each week.

Though his gallery is full of art, he joked that its only about 20 percent of the art he has collected.

In fact, all of the pieces in his gallery came from a single bedroom in his house. He keeps the rest of his art around his house and he has other pieces stored away. 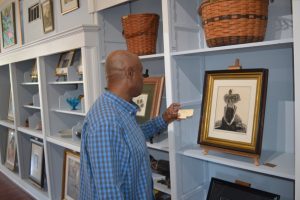 Anthony Pernell studying the price of one of his paintings.

Once customers purchase his pieces, he plans to bring in more from his collection at home and in the storage units.

“I’m sure there’s some things in here that they haven’t seen before,” he said.

He’s already gotten feedback from the public about new dimensions he could bring to the gallery including branching into framing and teaching art classes.

“I’m listening to the people that are coming in,” he said.

As of now, his gallery is open seven days a week, but he’s still figuring out his hours.

“I think this is the best spot for a business in downtown,” he said.