Howard, Ernest T. and Charlene entertain at 90-plus Birthday Celebration 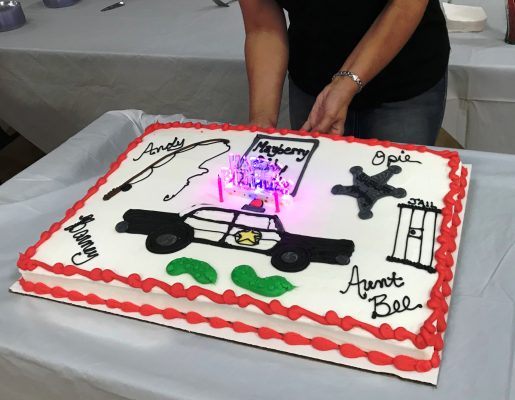 So to honor those reaching that benchmark (as well as some who have already done so), the Stanly County Senior Services conducted its annual 90-plus Birthday Celebration on Thursday at the Senior Center. It featured a theme of “The Andy Griffith Show,” with entertainment, memorabilia, door prizes and food.

Becky Weemhoff, Stanly Senior Services director, welcomed those in attendance to the event.

“This is our 13th year doing this celebration,” she said, “and we have a different theme each year.”

According to Weemhoff, those wishing to attend are required to pre-register, with each honoree allowed to bring two guests.

Ladies in attendance received a string of pearls matching those worn by Aunt Bea, with men “deputized” and issued a badge as honorary members of the Mayberry Sheriff’s Office. Goody bags, donated by various sponsors and assembled by Senior Center staff and volunteers, went to all honorees, and birthday cake as well as Coke, Cheerwine and root beer floats were served to all in attendance.

Entertainers for the event included Andy Griffith show veterans Howard Sprague (portrayed by Jeff Branch of Oakboro), Ernest T. Bass (Phil Fox of Gastonia), and Charlene Darling (Sandy Hatley of Stanfield), who performed a number of skits and songs, followed by a surprise appearance by Elvis T. Bass (Fox), who sang a number of Presley’s hits.

Pamela Sullivan, Senior Center program coordinator, noted that 181 attended the event, with 66 of those being 90-plus birthday guests.

“And of the 66 honored guests, 19 came from various assisted living agencies,” said Sullivan, “with 47 attending independently.” 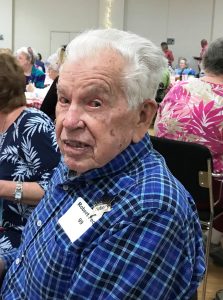 Robert Peck was the oldest in attendance at 99.

Sullivan also recognized Robert Peck, 99, as the oldest honoree in attendance. In keeping with the theme, Peck received a copy of “Aunt Bea’s Cookbook” and a jar of pickles.

“The event would not happen without our many sponsors and volunteers,” Sullivan added, noting that four assisted living agencies, as well as 32 volunteers representing five businesses and 23 sponsoring agencies contributed time and resources toward the celebration.