Oakboro officer recovering after being hit on patrol 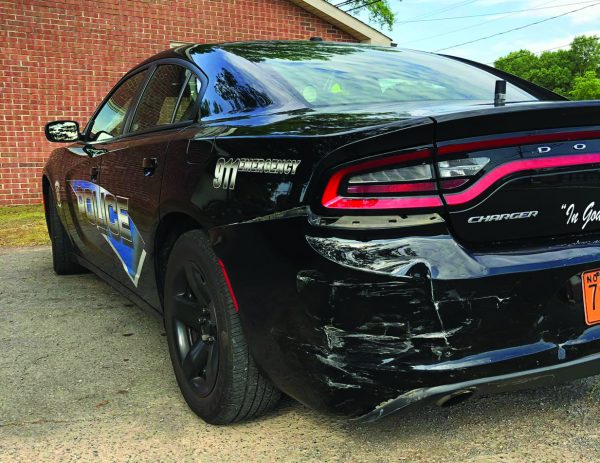 An Oakboro officer will be fine after his patrol car was repeatedly rammed early Thursday morning.

While on patrol at about 1 a.m., Cpl. David Daigle was turning off Peachtree Road onto Redwood Lane in the Arbor Heights neighborhood when he noticed a vehicle in his rearview mirror. Daigle initially assumed it was a newspaper carrier on her route and continued traveling at about 25 mph, according to Oakboro Police Chief T.J. Smith.

He felt the car strike his vehicle from behind and thought it was an accident. When it happened again and the vehicle began pushing him down Redwood, Daigle accelerated to escape, then turned in the cul de sac and narrowly avoided being hit head-on, Smith said.

The fourth and final time, Daigle’s car had temporarily lost power and the suspect’s vehicle hit him at an estimated 70 to 75 mph.

The suspect was heading south towards Oakboro, but then went north towards N.C. Highway 24-27. Daigle pursued and found the suspect’s vehicle parked by a porch on N.C. Highway 205, Smith said. The suspect allegedly pulled open the house’s locked storm door, but was unable to access the locked main door.

Daigle requested backup and checked inside the suspect’s 1999 Honda, finding it empty, Smith said. He was searching for the suspect when Daigle heard him yell. The suspect allegedly approached him saying, “I have something for you. I got a gun.”
Daigle gave the suspect verbal commands and when backup arrived, the suspect “lunged” towards an officer, Smith said.

The suspect was apprehended and found to be unarmed. He was identified as Erwin Elmer Chavis Jr., 45.

Oakboro warrants and citations from the Highway Patrol show two different addresses for Chavis, one in Oakboro and one in Albemarle.

Both Daigle and Chavis were taken to the hospital for evaluation, Smith said. Daigle was released and Chavis was still hospitalized as of 9 a.m. Friday.

Chavis will face multiple charges upon release, according to Smith.

Oakboro issued warrants alleging assault with a deadly weapon with intent to kill, assault on an officer and attempted first degree burglary, all felonies, as well as misdemeanor injury to personal property.

Chavis will also face charges from the Highway Patrol.

The police department obtained a copy of home security footage showing part of the incident at the residence, Smith said.

Daigle will be fine, the chief said.

“He’s complaining of neck stiffness but he’s going to be alright,” Smith said.

The Honda suffered an estimated $1,500 in damage while the police car had about $2,000 in damage, Smith said.

Smith said neither Daigle nor the department has any known connection with Chavis.

“This is one of those things you very rarely ever hear about, someone attacking an officer,” Smith said. “That’s why he could not believe that someone would (intentionally) hit him. He felt bad (at first) thinking it was the newspaper lady… We don’t even know this guy. It’s just a very odd situation.”

State records show Chavis was convicted of larceny in New Hanover County in 2001.

He has no prior criminal record in North Carolina.

Chavis is scheduled to appear in court on July 2 to face charges of speeding, reckless driving to endanger, failing to stop after causing property damage, driving while impaired, driving with expired registration and driving without current inspection, all from citations issued by the Highway Patrol.

Patrol arrived later to follow up on the accident.