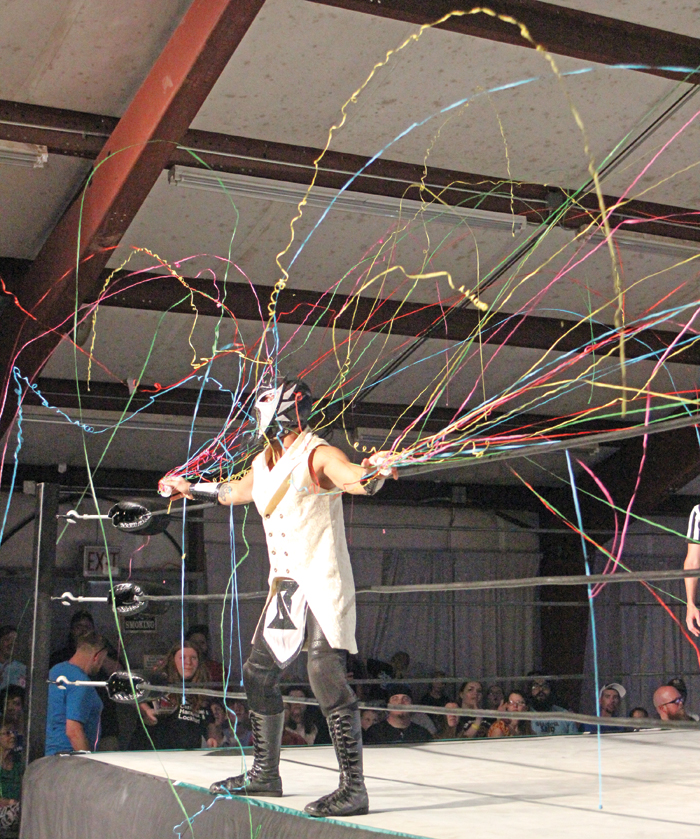 Serpentico sends out streamers as part of his introduction at the PWX event Saturday at the Stanly County Fairgrounds. (Photo by Charles Curcio)

More than 400 people filled the exhibit hall at the Stanly County Fairgrounds on Saturday night to witness the first-ever pro wrestling event presented by the Charlotte-based company, Premiere Wrestling Xperience.

The event, titled “We Deserve It” featured seven matches on the card including the main event where PWX heavyweight champion Slim J successfully defended his title against Elijah Evans.

Evans, who wrestled for a faction called “The Syndicate,” announced Saturday’s match was his last with the PWX.

A total of eight matches took place Saturday as part of the event.

Brian Kanabroski, the owner of PWX, said he and his team were “extremely appreciative and excited about the local support from Stanly County and surrounding area.”

After the event, it was announced plans were underway to bring another PWX event back to Albemarle at a later date.

“To those who haven’t experienced a PWX event before, thank you. We look forward to our return,” Kanabroski said.