Bullard excited to be Pfeiffer’s president

Dr. Scott Bullard is getting settled as the 11th president of Pfeiffer University.

He succeeded Dr. Colleen Perry Keith, who after four years with the university left to become president at Goldey-Beacum College in Delaware. 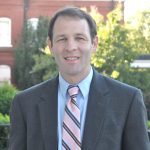 Bullard was previously interim president at Judson College, a private Baptist women’s college in Alabama. Pfeiffer is about three times the size of Judson.

“It’s been great,” Bullard said of introductory period at the university. “I have encountered amazing faculty, amazing staff and amazing students.”

Though most of the students are off campus for summer break, Bullard has enjoyed interacting with students and faculty who are helping run several summer camps on the campus.

Besides orienting himself to the campus and getting to know students and faculty, Bullard has been busy talking to donors and alumni of the university.

He has been impressed that the school’s undergraduate enrollment, unlike many rural colleges, increased this past school year compared to the previous year.

He is looking forward to the construction and completion of the new health center, which is set to open in downtown Albemarle in 2020.

The Health Sciences building will be home to the new physician’s assistant program and the new occupational therapy program, pending approval of Pfeiffer’s application to become an institution eligible to award doctoral degrees.

Bullard estimates when the two programs in the Health Science Center are operating at full capacity, they will bring more than 250 students to downtown Albemarle and, a number of new employees to the area.

He said there will be room for additional programs as Pfeiffer grows and adapts to the continually evolving needs in the world of health care.

Bullard learned about the Pfeiffer presidency in late March. He said it was an enticing prospect because his family still resides in North Carolina.

He went through a semi-final interview in April and later met with several Pfeiffer Board of Trustees at the Misenheimer campus.

He learned he officially got the job April 18.

“As a search committee we knew we really wanted someone with presidential experience and Scott fit the bill,” Pfeiffer Board of Trustees Chairman Bob Brietz said.

He added Bullard was someone who could raise money and who was a “Godly person.”

Bullard said he talked with Keith two or three times each week in May for several hours before meeting for two days on campus before she left.

Originally from Laurinburg, Bullard grew up knowing about and having an interest in Pfeiffer, in large part because he grew up in the United Methodist Church but also because St. Andrews Presbyterian College (which is now St. Andrews University), a private college in Laurinburg, competed against Pfeiffer in athletics.

“Pfeiffer was always sort of around when I was a kid,” he said.

He received a Bachelor of Arts in Religion and Philosophy from Campbell University and later a Master of Divinity from Duke University. He also has a Ph.D. in theology from Baylor University.

Bullard said he went to Duke expecting to be a United Methodist minister, but once he graduated he decided to become a university professor instead.

Over the years, Bullard taught religious classes at Baylor, the University of Mary Hardin-Baylor in Texas and Judson.

He focused his research on the ritual of eating within religion, especially in relation to the Eucharist, or Communion. He wrote a book about the subject, titled “Remembering the Body: The Eucharist and Ecclesial Unity.”

Bullard has spent his first few weeks getting to know the Stanly community.

He has done of lot of his networking through sharing meals with people.

“My dissertation is on eating and eating together and the way that breaks down barriers,” he said. “So it’s important for me to link my scholarly work with my leadership style.”

Bullard ate lunch with campers, a Pfeiffer religion professor, officials at Uwharrie Bank, members of the Albemarle Rotary Club and a Pfeiffer alumnus.

Eating together is a casual and effective way to get to know people, he said.

“When we break bread together, we let our guards down,” Bullard said. “And you can get to know an institution and a human being really quickly that way.”

On what students can expect from Bullard, he said: “I think students will see a former professor who remembers what it’s like to be with students in the classroom.”

He wants students to be “informed in their field,” but “I also want them to be well-rounded.”

He and his family are also huge soccer fans. A few summers ago, they travelled to England and Scotland for a wedding. While there, they were able to watch his children’s two favorite teams compete: Manchester City and Arsenal.