Lt. Matthew “Hunter” Harvey, a native of Oakboro, assumed command of Coastal Riverine Squadron 3, Alpha Company, Crew 1, during a ceremony on board Naval Amphibious Base Coronado, in June.

Harvey is the Navy’s third surface warfare officer to assume the new Coastal Riverine Force (CRF) command-at-sea billet on the Navy’s new cutting-edge Mark VI patrol boats and will deploy with the craft and crew. 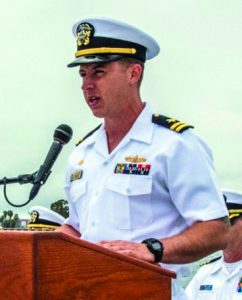 Lt. Matthew “Hunter” Harvey speaks during the change of command ceremony. He is now in command of the Navy’s Coastal Riverine Squadron 3, Alpha Company, Crew 1. (Contributed)

“By allowing junior officers to tackle the challenges that come with early command, our abilities sharpen with each evolution,” Harvey said. “We have been provided with platforms that continue to progress in lethality, complexity, and ability, along with the responsibility and authority to lead them.”

“One thing I really enjoy about this job is the opportunity to work in concert with, or in direct support of, Seabees, EOD and expeditionary cargo handlers,” Ray said. “While antiterrorism and force protection remain the core competencies of the Coastal Riverine Force, this platform, and the ingenuity of those who take her to sea, will position us to enable and enhance emerging or immature capabilities in the space between surface warfare and the other expeditionary tribes.”

Harvey graduated from Virginia Military Institute with Bachelor of Science in Civil and Environmental Engineering and commissioned May 2014. Harvey has completed deployments in the 5th and 6th Fleet areas of responsibility while serving as the fire control officer aboard Arleigh Burke-class guided-missile destroyer USS Oscar Austin (DDG 79).

The new Mk VI command positions were created to provide the dedicated and resourceful leadership required to safely maintain and fight the advanced patrol craft that continues to transform the CRF through extended reach and increased combat power.