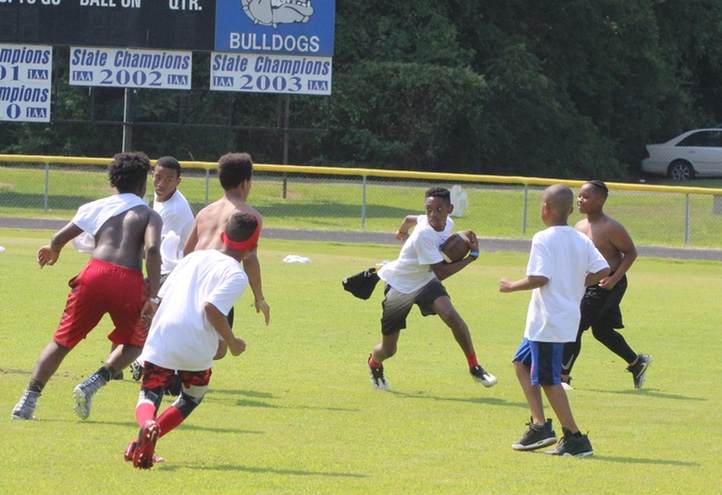 Christyan Washington from Marshville jukes people out as he tries to score during a scrimmage.

Kids from all around Stanly (and beyond) gathered at Albemarle High’s football stadium for the third annual Stanly Elite Football camp Saturday.

The free camp, hosted by former Albemarle football standouts Denico Autry and R.J. Prince, was a chance for kids, ages 5 to 14, to have a good time, learn more about the game and meet current NFL players. There were an estimated 200 kids at the camp.

“Once you’re a Bulldog, you’re always a Bulldog,” said Autry, who graduated from Albemarle in 2009 and is a defensive end for the Indianapolis Colts. “I try and come back to my community and give back and give what I didn’t have as a kid.”

Autry, 28, hopes that the kids’ love for the game grows after attending his football camp. “That’s something you can never take from a kid,” he said. 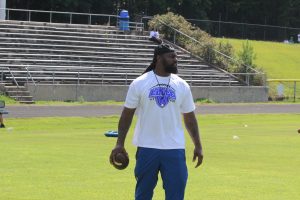 Autry started the football camp two years ago and Prince helped with the camp last year.

For Prince, 24, the excitement of being back at his school and town is what brings him back to the camp.

“I love my hometown,” said Prince, who graduated from Albemarle in 2012 and plays offensive guard for the Baltimore Ravens. “We’re trying to set a blueprint for all of these kids to follow.”

Another current NFL player, the Indianapolis Colts’ Grover Stewart, was at the camp along with Autry’s brother Lee, who plays defensive tackle at Mississippi State.

Prince said he and Autry are trying to inspire the kids and teach them the world is a bigger place than just Albemarle and Stanly.

“It’s always good to give back, too,” he added.

Albemarle High means so much to Prince.

“Everybody that goes here, after they graduate, likes to come back,” he said. “It’s just a small-knit community and this high school is a big mainstay in the community.”

Several of the school’s football players wore their uniforms and helped conduct the football drills and scrimmages. 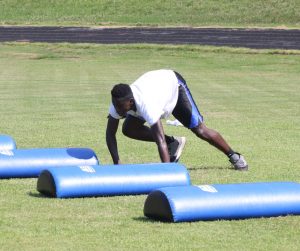 Akil Smith running a drill during the football camp. 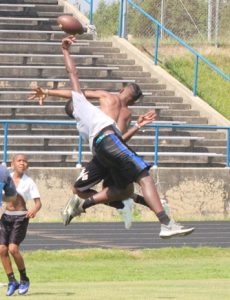 Akil Smith (in white) trying to catch the ball against defender Cam Smith while Christian “Little Bill” Harris looks on.

Albemarle head football coach Richard Davis said the school’s football team is one big family “and so for them to see fellow alums come back and give back is very important.”

“We preach service,” he said, “and they see it firsthand (with Autry and Prince).”

Davis hopes the kids learn about the importance of working hard and achieving their dreams.

Even though the NFL is a long shot for most people, Davis added, “if you commit yourself and you work and take care of things in the classroom, anything is possible.”

The camp means a lot to the kids as well.

“It’s special,” said 13-year-old Mario Thomas, who lives in Stanly, “because Denico is coming back to support his city.”

Besides learning from the professionals, the kids received a free backpack and camp T-shirt.

“I’ve never been to a school with so much pride in my life,” said Davis, who has been with the school for two years.

“Everywhere you go, all you hear is Bulldog pride,” he added.

Prince said he hopes the kids learn to work hard and dream: “Those two things can really take you a long way,” he said.

Autry plans to continue the event for as long as possible.

“Albemarle has always been known to be one of the big powerhouse football towns in the state and I’m just trying to restore that,” he said. 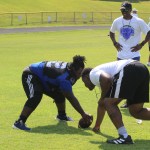 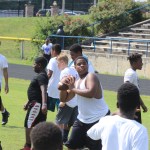 Jaiden Dumas, a 12-year-old from Greensboro, throwing the football during the camp. 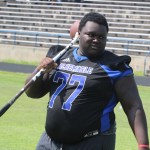