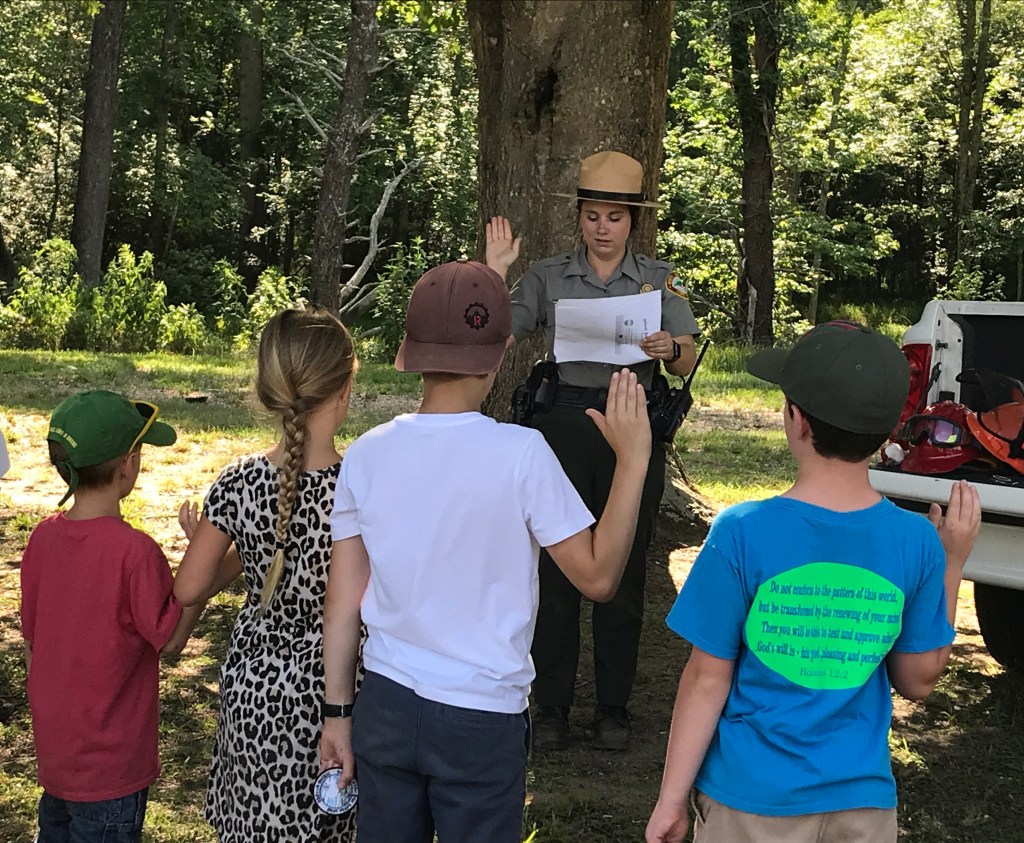 Morrow Mountain State Park is the third oldest state park in North Carolina, behind only Mount Mitchell and Fort Fisher.

The park is at the intersection of three rivers — the Yadkin, Pee Dee and Uwharrie.

The seven children who took part in Junior Ranger Day Sunday afternoon at the park learned these facts and more.

The children and their parents learned a host of information about the nature and history of Morrow Mountain.

The event, hosted by Rangers Maggie Miller and Ryan Swikle, lasted about 90 minutes and involved hiking part of the Fall Mountain Trail along the river bank.

The rangers explained the history of Morrow Mountain and all of the different jobs that park rangers perform. There are five rangers that work at the park.

The children were given a Junior Ranger workbook full of activities they completed during the event. Each completed activity earned them a certain number of “acorns” or points. Twenty acorns were needed to receive a patch and be sworn in as Junior Rangers. Each of North Carolina’s state parks offers Junior Ranger patches.

One of the activities involved interviewing a park ranger.

The children peppered Swikle with questions such as “what do you like best about being a park ranger?” “what is the most difficult part of being a ranger?” and “what is your favorite season at the park?”

He loves guest interaction the most; the most difficult thing is multitasking; and fall is his favorite season at the park.

Swikle said the best thing about interacting with kids at the park is “their enthusiasm.”

“They’re just really excited to be here and they have grins on their faces and they’re happy to be out in the outdoors,” he said.

“I always loved being outside as a kid and I would always hope I can encourage other young children to grow up and be stewards and maybe decide to become park rangers,” Miller said.

The Russell family from Moore County plan on going to each of North Carolina’s 41 state parks to collect Junior Ranger badges; Morrow Mountain was their third park.

“I think for our kids, they really like the idea of being a ranger,” said Meg Russell. She and husband Darryl have four children: Zeke, Haddie, Pallu and Salem.

“They really love being outside…and going out and seeing what different parks offer is really fun and exciting,” she said.

She added that the Junior Ranger activities “are like our family’s scout group.” 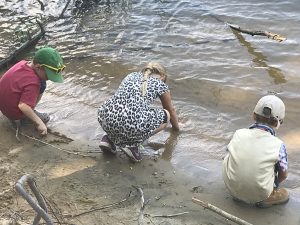 Salem, Haddie and Pallu Russell play along the bank of the Yadkin River at Morrow Mountain State Park.

While on the trail, the kids documented in their workbooks things that were beautiful to them, sounds that they heard and things they smelled.

They also cooled off by dipping their feet into the Yadkin River.

The rangers discussed park information like how to properly identify trails and animals tracks.

“You’ve got to know how to hike trails if you’re going to be Junior Park Rangers,” Miller said.

At the end of the event, and after the kids accrued the 20 needed acorns, they raised their right hands, recited a pledge and were sworn in as Morrow Mountain Junior Rangers. They received a patch and a certificate. 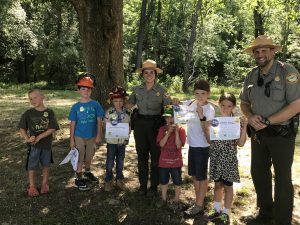 “I liked being out in nature and getting the patch,” said Zeke Russell. “It’s just calming to me.”

Haddie said she most enjoyed receiving the patch.

The rangers enjoyed interacting with the kids as well.

“I just want them to smile and have a fun time out here,” Miller said.