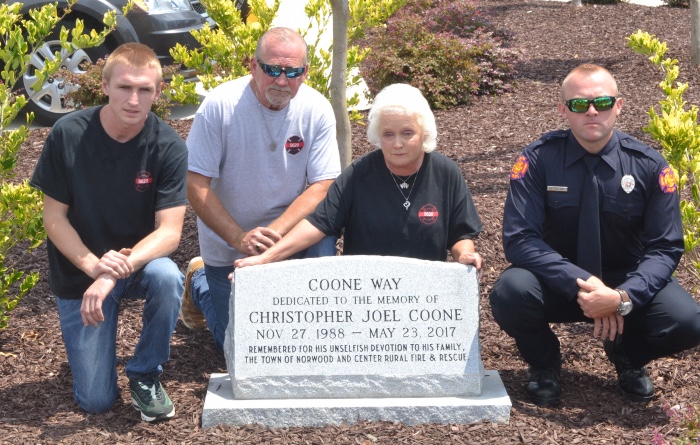 Cody Coone, Tina Coone, Fred Coone and Bradley Coone gathered around Chris Coone's stone plaque behind the fire department Friday. A street was named in honor of Chris Coone, who died in May 2017.

It honors Christopher Coone, a Norwood firefighter who died in May 2017. 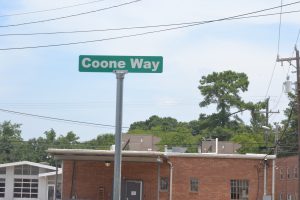 “We hope that with the street, Coone Way, it will help us as a community to remember that we all can make a positive difference as Chris was doing,” said Norwood Mayor Harold Thompson to a crowd of several dozen during the dedication.

Central Rural Fire Chief Vaughn Rummage said the dedication meant a lot to the fire department “because he was part of us.”

“When we look at these signs, we can think of Chris,” he added.

Rummage said Coone started working with the fire department when he was in high school. He was a firefighter for 13 years.

He was the crew leader for the town’s water and sewer department at the time of his death.

Holding back tears, Coone’s mother, Tina, said “it means a lot to know that he was thought about that much.”

The town also created a stone plaque beside the street in honor of Coone. It reads: “Remembered for his unselfish devotion to his family, the town of Norwood and Center Rural Fire and Rescue.”

“This plaque means that he lives on with us,” Rummage said.

Hartsell came up with the idea for creating the plaque and he coordinated with Edwards Funeral Home to donate the plaque to the fire department.

Norwood Town Council began talking about naming the street, which was built in the fall, in March and a name quickly came to mind.

“When the discussion first started at our council meeting for the street name, the idea of naming it after Chris was almost immediate and the decision unanimous,” Thompson said.