Construction for New London park should begin in August 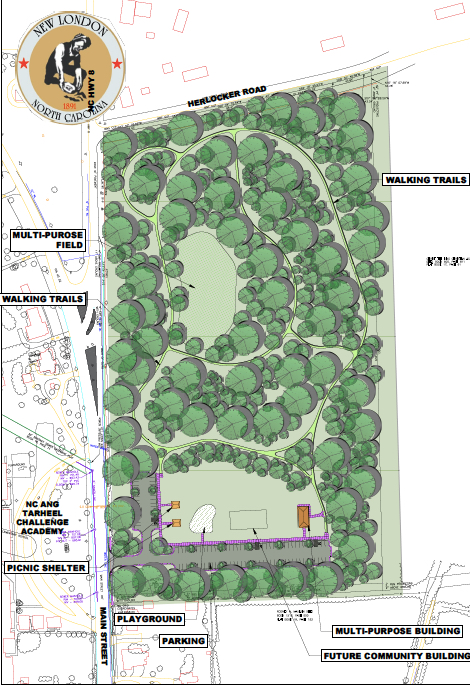 A drawing depicts what New London's new park will look like.

After considering several bids to build the town’s new park, New London awarded Lynn Thomas Grading Inc. of Polkton with the contract to build the park on North Main Street.

Paperwork still has to be signed, but construction on the project is expected to start in early August, Mayor Tate Daniels said. It should be finished by early summer of next year.

The park will be 22 acres and much of that (about 6,000 square feet) will be used for walking trails, Daniels said. The park should also include pavilions, tables, a field playing area and two playgrounds, one for young children and one for older children, according to an earlier SNAP article.

The town has discussed building the park for about three and a half years, Daniels said. Chambers Engineering of Albemarle has been working with the town over the last 18 months on various design options for the park.

The project will cost around $1 million. The town received $275,000 from the North Carolina Parks and Recreation Trust Fund last August. The town will pay for the remainder of the project.

Daniels hopes the park will be a safe environment for people to enjoy themselves.

“It’s an outdoor recreation facility that we don’t now have,” he said.

There will be groundbreaking ceremony for the park sometime in the near future, Daniels said.