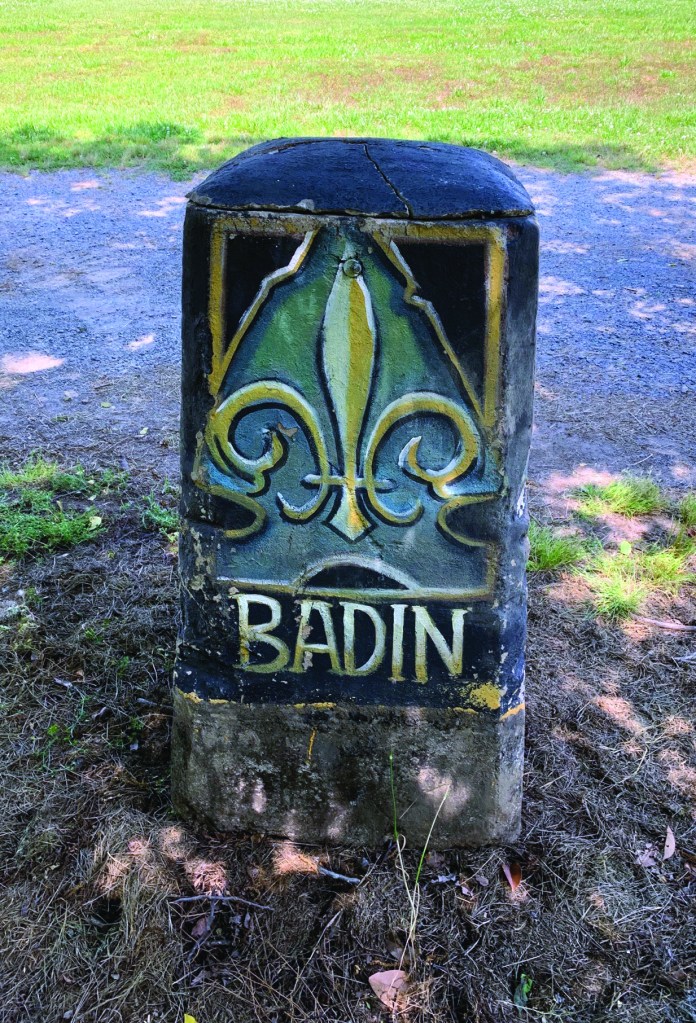 Residents spoke of their desire for the "Dead Man" post in Badin to be restored to its original location. (Contributed)

Badin residents are begging the Town Council to resurrect the town’s Dead Man.

Several residents spoke on behalf of the historic Dead Man concrete post during a public hearing on Tuesday evening, requesting the council restore it to its spot in the Falls Road median.

The concrete post has been there as long as the residents can remember, though its history is unclear. The post was likely used as a traffic sign and has been in the median since at least 1938, Town Manager Jay Almond said Wednesday.

Almond said it may have been installed by Alcoa or the North Carolina Department of Transportation, adding the name has no “officially-explained reason.”

The post has survived for decades, but not without injuries.

“I know it gets hit a lot,” Dale Ward said to scattered laughs from attendees. “I’ve helped pick it
up at least once when it’s been down.”

Ward noted he has seen it painted different colors and designs as time has passed.

“It tore my soul up when they removed it,” Eudy said.

Eudy lives in New London, but her parents’ house is in Badin.

Jane Beard, of Ocala, Fla. also advocated for restoring the post. She owns property on Valley Drive and recalled seeing the post as she grew up.

“Like Dale said, everything we grew up with — I lived here over 40 years — it’s gone,” Beard said, noting that familiar trees, including those at the school, are no more. “The simple Christmas lights we used to have are gone. [That post is] just something that, like I said, that’s Badin.”

Beard noted that Dead Man requires little maintenance, unlike plants that need watered or decorations that are changed seasonally, saying she felt it could be put back.

Wendy Dorsey Rachels of Cedar Street helps manage a Facebook page, “You know you are from Badin if you…” and said the group has had a lot of discussion from residents and former residents who are in favor of restoring the post to its original position.

She told the council she would like to see it put back.

David Summerlin of Valley Drive was one of several other residents who requested the post be put
back, though he said he plans to keep it at the town museum if the town will not put it back.

While its history is somewhat murky, the significance to some Badin residents was made crystal-clear.

None of the speakers spoke against restoring the post.

When one audience member asked why it was removed, Almond offered a brief explanation.

“DOT has tried to remove it once before several years ago after it had been knocked askew by a truck,” Almond said. “We stopped that from happening, asked nicely to either replace it or move it to the museum, and they said, ‘We’ll replace it and see how long it lasts.’ ”

That was around five years ago, soon after it had been painted again, adding fleur-de-lis, Almond said.

Since then, there have been talks about upgrading the median and downtown “gateway” to the town, with efforts made in that direction. The state and town worked on re-designing the median.

“During that, none of the original designs had it drawn in, none of the comments about what was wrong really centered around it, either,” Almond said. “Almost as if it had been overlooked, really, more than anything.”

Almond said he never heard the council suggest removing Dead Man, though he noted it had to be
relocated for at least a short time during renovations.

When the post was nearly taken away, the town “saved it,” Almond said.

He noted that few people have spoken up about Dead Man, adding this is the first time residents have approached the council about it during a public meeting. The town has waited to see what the public would say.

Councilman Larry Milano said the town wants to respect the public’s opinion about the post, but is
interested in preserving it.

“We talked about restoring it and putting it in a place of honor,” Milano said, adding the town did not talk about trashing it.

“Over the last 20 years I’ve been in the town, 21 years, I’ve seen it hit by cars, pieces of it come off,”
Milano said. “If it truly is something you want to honor, we need to restore it and we need to put it in a proper place where it’s not going to be destroyed.”

The council did not hold a vote about the post, but Milano invited the public to discuss the state road as a whole with the DOT to tell it that the DOT has “ruined” the road with previous work.

If the post is restored, the town will likely have to work with the DOT since the median is on a state road, Almond said.