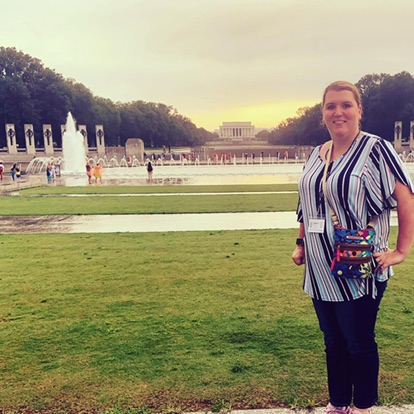 McIntyre, 28, an English teacher at Gray Stone Day School, was one of 39 educators from across the state, and the only one from Stanly County, who traveled to the United States Holocaust Memorial Museum in Washington, D.C. in late June.

“There was a couple of times where I just had to sit down,” she said after looking at graphic images or reading tough passages. “It is so heavy.”

The Holocaust refers to the systematic mass execution of 6 million Jews in Europe by Adolf Hitler, the Nazis and their collaborators leading up to and during World War II.

The permanent exhibit in the museum is three floors and is divided chronologically. The first floor features Hitler’s rise to power, the second is about the concentration camps and the third is about the Americans intervening and the aftermath.

The educators were given journals to help work out what they were feeling.

In addition to touring the museum, the teachers heard testimony from a Holocaust survivor and attended a worship service at the Adas Israel Synagogue. They also exchanged lessons plans with one another.

While at the museum, she got to see a replica of a boxcar that brought the people to the concentration camps, saw a scale model of a gas chamber and read many of the testimonies of the Holocaust survivors.

She saw pictures of educators who were brought to the concentration camps and killed.

“That really impacted me,” she said, “because being a teacher myself, I cannot imagine what those people went through.”

She said seeing personal images or writings of people involved in the Holocaust makes it much more profound and relevant.

McIntyre mentioned a new exhibit at the museum, “Americans and the Holocaust,” which featured interactive panels that examined the motives, pressure and fears that shaped Americans’ responses to Nazism and the Holocaust.

The exhibit interested McIntyre because while Americans were upset at how the Jews and others were being treated by the Nazis, the majority of them didn’t want to allow the persecuted to come to the United States for refuge.

She wants to attend more Holocaust-related conferences and learn more about the time period.

Her students already read “Night,” written by Holocaust survivor Elie Wiesel about his experiences in the concentration camps.

“I choose to continue to teach ‘Night’ because I do think it’s a great piece and it has a profound impact on people,” she said. “I think it’s even more relevant today with what’s going on in our world.”

What struck McIntyre was a quote by Wiesel at the museum: “This museum is not an answer. It is a question.” 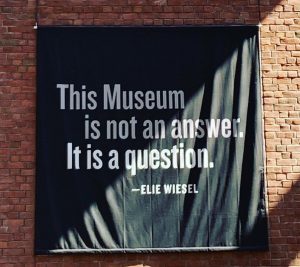 “I think it is so easy for us (Americans) to remove ourselves because it was happening in Europe,” McInytre said.

But she stressed how important it is that people learn about the Holocaust and encourages people to go to the museum.

“I think it’s something that everyone needs to see and experience,” she said.

Their trip was sponsored by the North Carolina Holocaust Foundation, the Jewish Federation of Greater Charlotte, Stan Greenspon Center for Peace and Social Justice and philanthropist Stan Greenspon.