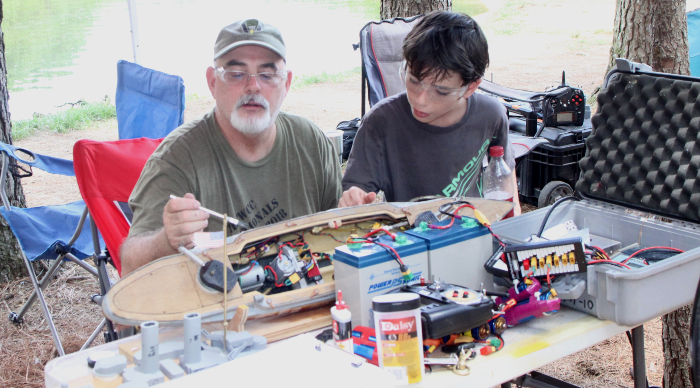 Terry Lee McKinzie, left, and his son Isaac, 10, from 'Louisville, Ky., work on repairs on a boat after a fleet battle as part of the 2019 IRCWCC Nationals at Oakboro Park. (Photo by Charles Curcio)

War ravaged one area in the western part of Stanly County all last week, but only the participants were in the line of simulated fire.

Participants drove and flew from places such as Texas, Missouri, Minnesota and Canada, bringing their World War I and II model ships built from the ground up to participate in simulated battles.

The event, hosted by former Oakboro resident Rob Stalnaker, ran for five days, allowing nearly 40 combatants representing the Allied and Axis powers to compete against each other.

Ships made of balsa wood are equipped with carbon dioxide powered cannons shooting tiny BBs from the turrets towards other boats or clay targets. Each boat also has miniature bilge pumps to clear water out of the hull.

The battles consist of two types of game modes including fleet battles, where players get points for battle inflicted to enemy ships.

In the campaign mode, boats try to hit targets representing enemy supplies while other boats protect their supply ships.

Stalnaker said one of the aspects about model ship battles he enjoys is being able to sit around and talk with fellow enthusiasts.

“We have a good old time. We get pretty intense when we battle, but at night we go home, sit down, go out to dinner and shoot the crap,” Stalnaker said. “We will give each other a hard time just as well. It’s all about camaraderie. From that perspective, we are all a pretty good bunch of friends.”

Stalnaker said another fun part of the hobby is building the ships, calling model boats “a craftsman’s hobby.”

Charley Stephens, the director of the nationals event from Lansing, Tenn., said the hobby helps to keep naval history alive and prominent in their lives.

Stephens said he and fellow combatants are adamant about keeping the battles between the two World War eras, with 1946 as the cutoff line for the newest a ship can represent.

He said the ships “are not something you can go and buy your own at a strip mall that takes an hour to build. Some of these guys spend, weeks, months and up to a year to build a boat.”

Battlers’ Connection is a website owned by Stephens which provides electronic and other technical gear for model boats, one of the few places hobbyists can go to get started building their own boat.

“Reliability is the key in this hobby just like a real warship,” Stephens said. “Damage control, fire control, just the ability to know when to fire and when not to fire.”

Oakboro has been a site for previous model boat battle events, including a few months ago when the park hosted the 2019 April Ambush.

“People that are willing to host the event nominate their area as a potential place to host. Depending on how many put their name on the list, the club in general votes where to host (nationals),” Edwards said.

Stalnaker recently moved from Oakboro to Leesville, S.C., but came back to host the event. He said the group chose Oakboro Park’s pond because of the unique structure and dimensions of the pond and the park as well.

“It’s a very wide-open pond. It’s relatively shallow. It’s easy to retrieve your ships. The Town of Oakboro has worked very well with us. (Oakboro) does a very good job for us.”

Crews from Oakboro topped off the water level at the pond and made sure the pond was clean to ensure a good experience, Stalnaker said.

Nationals is the only event, Edwards said, where it is a true battle between the Allied Powers (USA, England, France and Russia) and the Axis Powers (Germany, Italy, Japan).

The IRCWCC is the oldest model boat club. It has been in existence since 1978. Marty Hayes from Annapolis, Md., has missed just one national event since the club started.

“I’ve known a lot of these people a long time,” he said.