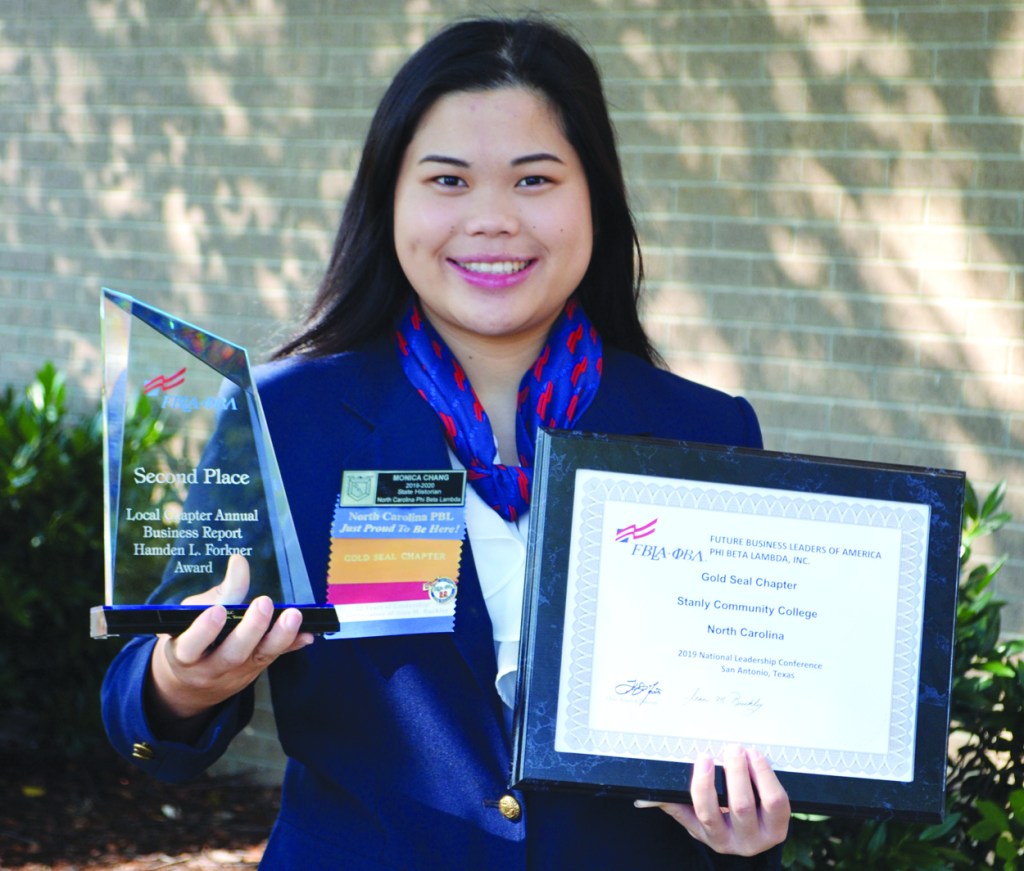 SCC PBL Chapter President and State PBL Historian Monica Chang shows off national awards received by the chapter at the business student group’s 2019 National Leadership Conference in San Antonio. SCC was named one of the national “Gold Seal Chapters” for the year, and the group also received second place for its Local Chapter Annual Business Report, a document of the year’s activities. (Contributed)

The conference was at the Grand Hyatt and Gonzalez Convention Center in San Antonio, Texas, with chapter leaders and state competition winners gathering for leadership programs, career planning sessions, the election of national officers and events resulting in national winners.
Historian Monica Chang was one of four state officers who presided over state meetings during the conference. The officers accepted awards for the largest state chapter membership and the largest state Professional Division membership.

Amy Ray, an SCC graduate now enrolled at the University of North Carolina at Charlotte, served as national treasurer for 2018-2019.

The opening day included the announcement of the national “Gold Seal Chapter” recipients. Based on chapter activities and involvement in state and national programs, recognized chapters received the award and special ribbons for their name badges.

In the competitive events, Ajahna Bellamy and Aaliyah Thomas from the Pfeiffer University chapter received seventh place in the Hospitality Management team competition.

Rick Gardner, an SCC graduate and president of the NCPBL Professional Division-Foundation Board of Directors, was one of four members of a “success stories” panel.

“Tina Preslar, the adviser at Pfeiffer, and I are pleased at the attention these PBL students have brought to Stanly County,” Hazlett said. “We were especially excited to have one of our local graduates serving as a national officer. Both of us express appreciation to the campus and community leaders who supported the PBL students and assisted with the chapters’ activities during the year.”