Stanly kids reach for the stars through library program 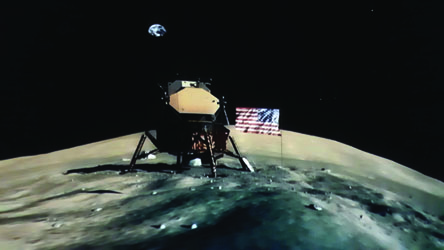 One of the images in the StarLabs program at the Stanly County Public Library this week. (Photo by MARINA SHANKLE)

Modern technology put the stars within reach of Stanly County library patrons this week in a program called StarLab.

The State Library of North Carolina purchased four inflatable domes set up to serve as mini-planetariums, or StarLabs, and distributed them to each of its districts.

Children and Youth Services Librarian Sara Hahn said each viewing within the mobile planetarium began with a brief video explaining the history of space exploration, including the space race and the moon landing. The StarLab also featured videos of underwater exploration and giraffes in Africa.

“The idea is bringing a planetarium to your community so that kids can explore it,” Hahn said. “The video talks about how travel has changed and how one day, you might get to travel to the moon.”