50 YEARS AFTER: ‘ONE GIANT LEAP FOR MANKIND’: Gazing up at the ‘final frontier’ 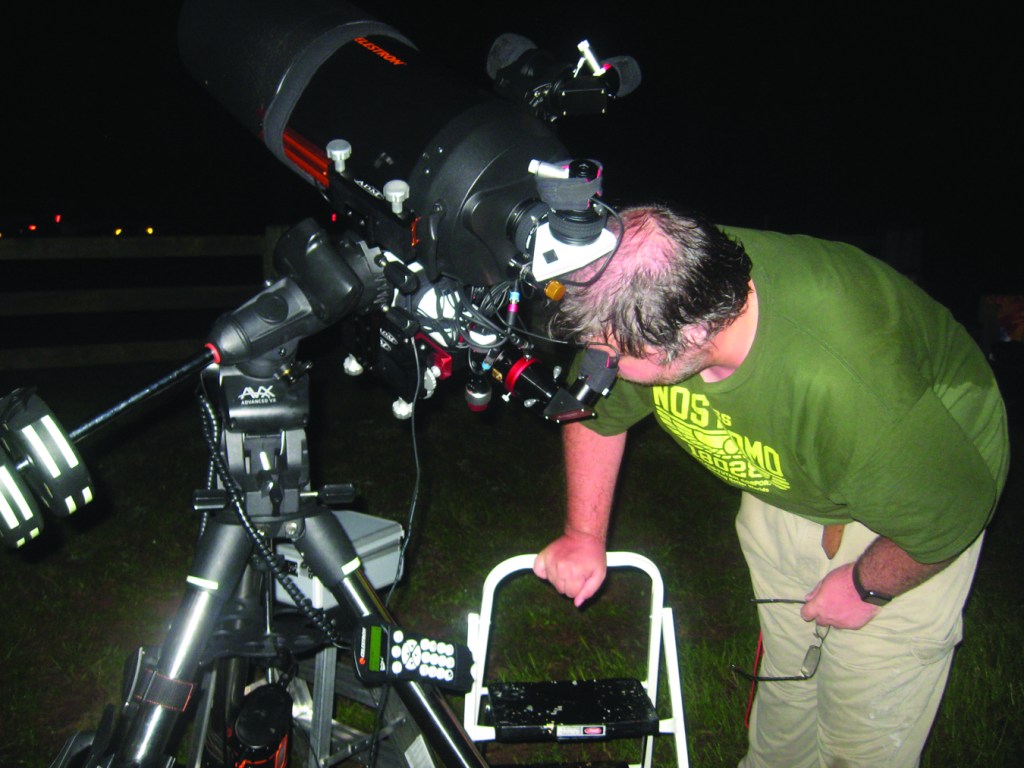 Christopher Betancourt gazes through his telescope at a view of the moon shrouded by clouds. (Photo by IMARI SCARBROUGH)

Children and adults were invited to learn about impact craters, constellations and more at tables set up by the Astronomical Society of Rowan County, Muddy Sneakers and Girl Scouts Hornets’ Nest Council at Morrow Mountain July 13.

While most at the event were not yet born when Apollo 11 landed on the moon 50 years ago, some jotted their memories from that event onto sticky notes collected on one table.

On another table, attendees were asked to write what their first words would be if they were the first people to visit Mars. Responses ranged from, “Where’s the bathroom?” and “I need food,” to “Is there somewhere to charge my phone?” and “Is there wifi here?”

“Siri, where am I?” one person wrote they would ask.

Meadow Palmer, 6, of Concord visited with her mother, Dominique, and Girl Scout Troop 1313.

Meadow said she hoped younger children would attend these events to learn more about space.

Josie Holman, 7, of Albemarle went to the Star Party with her mother, Kelly. They visit Morrow Mountain nearly every weekend and spent the day at the park before the event started.

Josie said she was surprised to learn that rocks crash into the moon. She enjoyed all of the activities, but especially liked dropping stones, sweet gum balls and other objects into pans of powder to make small impact craters — similar to the ones that dot the moon.

Kim McPherson, of Rockingham, went with her daughter, Mandy Moore, of Hamlet, and Moore’s daughter, Jorja, as well as Jorja’s cousin, Jenna Watson, of Hamlet.

McPherson was a toddler during the Apollo 11 landing and remembered learning about space events in school.

Jorja was especially impressed with the mud painting activity offered by Muddy Sneakers and by another activity that used Play-Doh models of the Earth and moon to show their relative size. A length of yarn between the two demonstrated the proportional distance.

Jorja and Jenna were surprised to learn how small the moon is compared to the Earth.

While no stars could be seen, a hazy view of the moon was visible.

Christopher Betancourt, of Rockwell, let guests peer at the moon through his telescope. He joined the Astronomical Society of Rowan County last year, and it was his first time visiting Morrow Mountain.

Aurian Phinney, who lives in the Albemarle area, took advantage of Betancourt’s offer to use the telescope.

“I haven’t used a telescope since I was a child,” she said.

Aurian’s father, Michael, also attended. He was about 16 or 17 when Apollo 11 landed on the moon and recalled watching updates on other space missions, as well.

This was the seventh annual Statewide Star Party, according to NCScienceFestival.org. There were at least 50 sites planned to have events. The theme, “The Moon and Beyond,” honors the 50th anniversary of the landing of Apollo 11 on July 20, 1969, which marked the first time human beings visited the moon.