Camp Barnhardt hosts Scouts from around the world 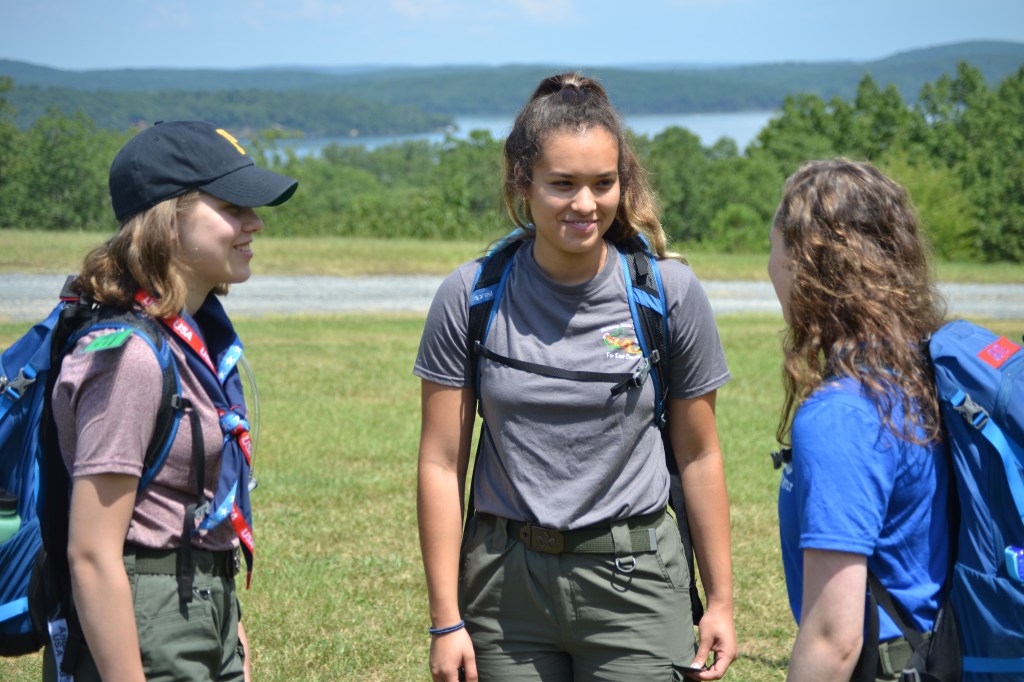 Andersen Clark from Germany, and Melanie Golden and Nancy Gutzwiller from Japan, enjoy their time at Camp Barnhardt. (Photo by CHRIS MILLER/staff)

Camp John J. Barnhardt is playing host to several Boy Scouts from across the world over the weekend as preparation for the World Scout Jamboree, which will be in West Virginia next week.

Around 197 Scouts will be at Barnhardt, said Kyle Camp, program director for the Central North Carolina Council (which oversees Boy Scout troops in seven counties).

Camp said he also thinks a few Scouts from Stanly will be going to West Virginia.

The Scouts have mandatory meetings and trainings for the World Scout Jamboree, but they will also have free time to meet other Scouts and enjoy Barnhardt’s many amenities including the climbing tower, zip line, swimming pool and canoeing and kayaking on the lake. 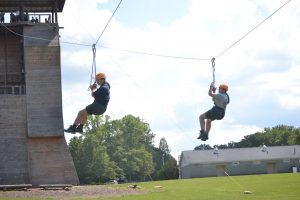 The scouts come from different troops but will be incorporated into provisional troops during their time at Camp Barnhardt and in West Virginia.

“This is the all-star Scout teams made up of the best of the best,” said Skyler Smith, who is a Scoutmaster from Grants Pass, Ore.

Camp Barnhardt is happy to temporarily house the Scouts from around the world.

“The Central North Carolina Council is truly honored to provide Camp Barnhardt, the Southern region’s premier camping facility, as the accommodations for the World Scout Jamboree,” said Greg Balog, CEO of the Central N.C. Council of the Boy Scouts of America. “This is a tremendous opportunity for the youth of the Central Piedmont area of N.C. to interact with Scouts from all across the world.”

Three of those international scouts are Melanie Golden and Nancy Gutzwiller, who are part of Troop 110 in Okinawa, Japan, and Andersen Clark, who is a Scout in Berlin, Germany. They are all from military families.

The girls are part of the provisional Scout troop USA 433, which features 36 girls. Though the girls in the troop have texted each over WhatsApp, they had never met each other until coming to Barnhardt. Their scout leader is Skyler Smith.

“It’s so nice to actually meet everybody and get to know them on more of a personal level,” Golden said.

Golden, Gutzwiller and Clark, who all arrived to Barnhardt on Thursday, joined the Scouts BSA (formerly the Boy Scouts) earlier this year, after the organization allowed girls to join in separate troops.

“Camp Barnhardt is so amazing,” Gutzwiller said. “It seems like such a great camp.”

Clark said it is great coming to an American scouting camp because there is so much more to offer, including mountain biking, swimming and a climbing tower, compared to Berlin.

The girls are planning on climbing the wall and going to the lake.

They have also enjoyed bonding with other Scouts from around the world.

“It’s been a wonderful experience knowing how we’re all from different places, but we all share common values,” Golden said.

The World Scout Jamboree is a 15-day event where Scouts can network with each other and interact with different world cultures.

The Jamboree occurs once every four years. The Scouts have to apply and be selected to attend.

“It’s like the Olympics,” Smith said. “It rotates each time in a different location and it’s hosted by a different country.”

There will be 50,000 scouts in West Virginia for the Jamboree and only 12,000 will be from the United States, Smith said.