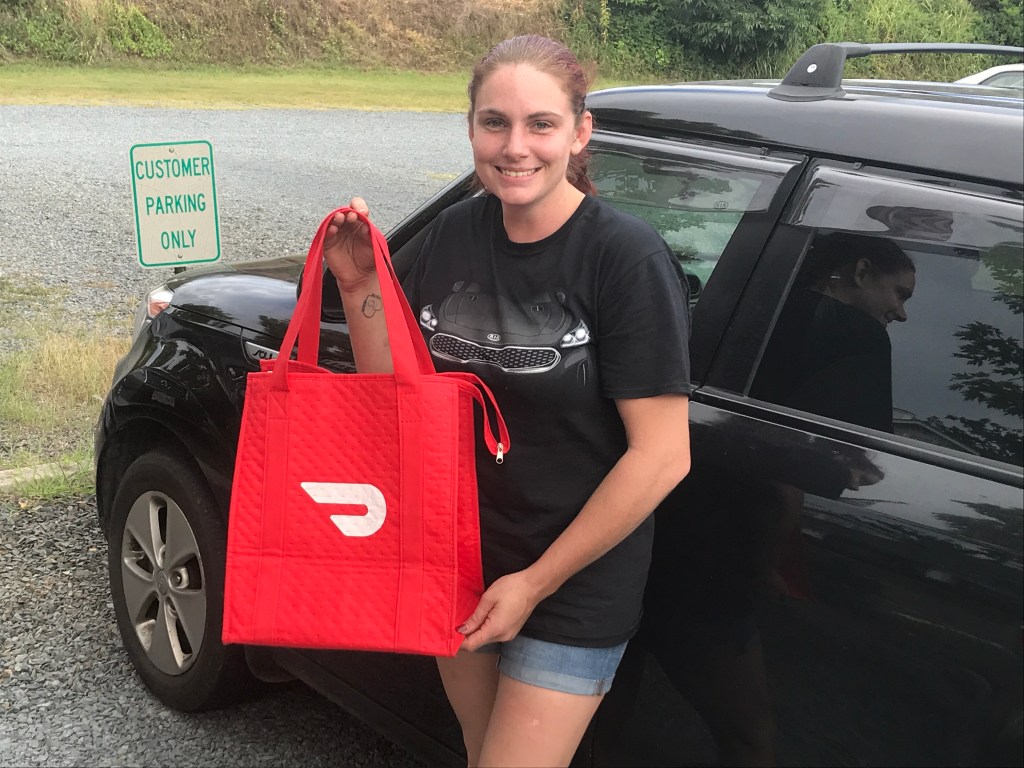 Susan Toncheff of Albemarle is a DoorDash delivery person, or dasher. (Photo by CHRIS MILLER/staff)

People looking to order in do not have to rely on pizza delivery anymore.

DoorDash, an online food delivery service, has come to Albemarle.

The service launched in the city July 10 and there are nearly 20 restaurants participating, including Yadkin Valley Steakhouse, Log Cabin Bar-B-Que, Jay’s Downtowner Restaurant, Little Tokyo, Second Street Sundries and the majority of the fast food options.

DoorDash hires independent contractors to deliver on-demand orders from restaurants. If people are interested in becoming a delivery person, or “dasher,” they can go to doordash.com.

Susan Toncheff of Albemarle has worked as a dasher since it began in the city. She also works in the Concord, Salisbury and Charlotte areas. DoorDash supplied her with a red bag and a special credit card, the “Red Card,” which allows her to pay for the food orders.

She works about 2-3 days a week in Albemarle.

Toncheff already has a full-time job in Salisbury so the money she makes as a dasher goes towards family vacations, she said.

She has the freedom to choose her own hours and which days she wants to work.

Toncheff said people are tired when they get home from work, so a delivery service is a nice reprieve from the hassle of going to get food.

Similar to ride-sharing companies Lyft and Uber, once customers pay for their meal (with tips included), they can track the delivery from their phone.

People can order with the DoorDash app or at doordash.com. There will also be no delivery charges for orders over $10 for the first 30 days. The delivery fee varies based on the order and location.

DoorDash recently surpassed Grubhub as the national leader in online food delivery, according to the business news site Quartz.