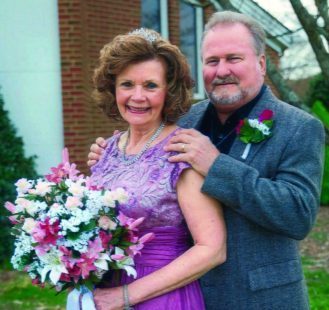 Mr. and Mrs. Henry Lester Furr are residing in Stanfield following a honeymoon cruise to the Bahamas.

The couple were united in marriage by the Rev. Jim White at 4 p.m. March 16, 2019 in Love’s Grove United Methodist Church in Stanfield.

Mr. Furr is the son of the late Mr. and Mrs. Claude Furr.

Mrs. Furr is the former Connie McCoy, daughter of Sarah McCoy and the late Lewis McCoy.

Mrs. Furr wore a full-length gown with a lace bodice and silver tiara with rhinestones.

The bride was escorted by her brother, John McCoy. Donna McCoy Smith served her sister as matron of honor and Hannah Lilly, granddaughter of the bride, attended as maid of honor.

Oak Lilly was the ring bearer.

For musical entertainment, the groom played saxophone, with Kathy Burris on piano and Ben Barker on dulcimer and harp. The couple were also honored by singers Leeah Cavanaugh, Hubert Furr and Mark Little.

A reception occurred in the Love’s Grove Family Life Center, hosted by Jennifer Lilly and Chasity Williams. Music was provided by DJ Todd Drye. A rehearsal dinner was hosted by the family at Love’s Grove Fellowship Hall.

The bride and groom were given a shower in January at the home of her daughter,  Jennifer Lilly.

A graduate of West Stanly High School, the bride attended the University of North Carolina at Charlotte and is employed by Novant Township Pediatrics as a patient service coordinator.

A graduate of West Stanly High School, the groom is retired from the U.S. Army. He is a musician who plays seven instruments, currently performing with The Furr Family Band and Valhalla Band.