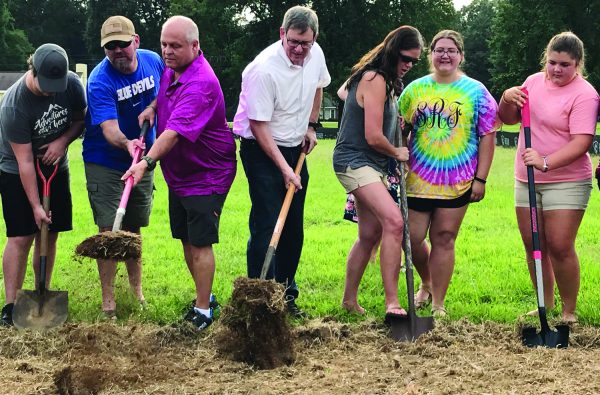 “We’re building a 4,000-square-foot youth ministry center,” said Dr. Tommy Ross, senior pastor of the church. “It’ll have a large open area that will be like a worship area. It will have the platform with the lighting and a sound system installed.”

The center will be for youth in grades 6-12. It will house Sunday School and youth programming, but also be a place where kids can have fun.

“Around the edges will be the place where the kids can kind of relax,” Ross said. “Couches and chairs and things like that where they can play their video games and whatever. I think they’ve already started looking at ping pong tables and foosball tables.”

Additionally, the church plans to have a small outdoor rec area for basketball and other activities.

More than a dozen youth came to the event to help break the ground where their future center will be.

“This is the first building this church has built in a long time, so it’s kind of a big deal for us,” Ross said. “What I found out is they’ve been wanting this building for a long time and just had never gotten to do it. So we kicked up a committee. Our youth began to grow so we said ‘let’s give them a really nice place to have as their own’ and so up pops this building.”

First Baptist has become increasingly focused on its youth in recent years, which in turn seemed to increase the number of kids involved.

“The church made a commitment about three years ago that they wanted to try to reach the future generations with the gospel of Christ, so we hired a full-time minister of youth and children.” Ross said. “Because of that focus on our youth, we’ve seen growth. It’s just been great to watch”

Steve and Jared Helms of Helms Builders are overseeing the center’s construction, which began Monday.

The building is set to be completed sometime between Thanksgiving and Christmas, weather permitting.

Braidyn Davis is a freelance writer for The Stanly News & Press.

By: Chris Miller and Evan Moore The City of Albemarle is set to petition the North Carolina Supreme Court to... read more