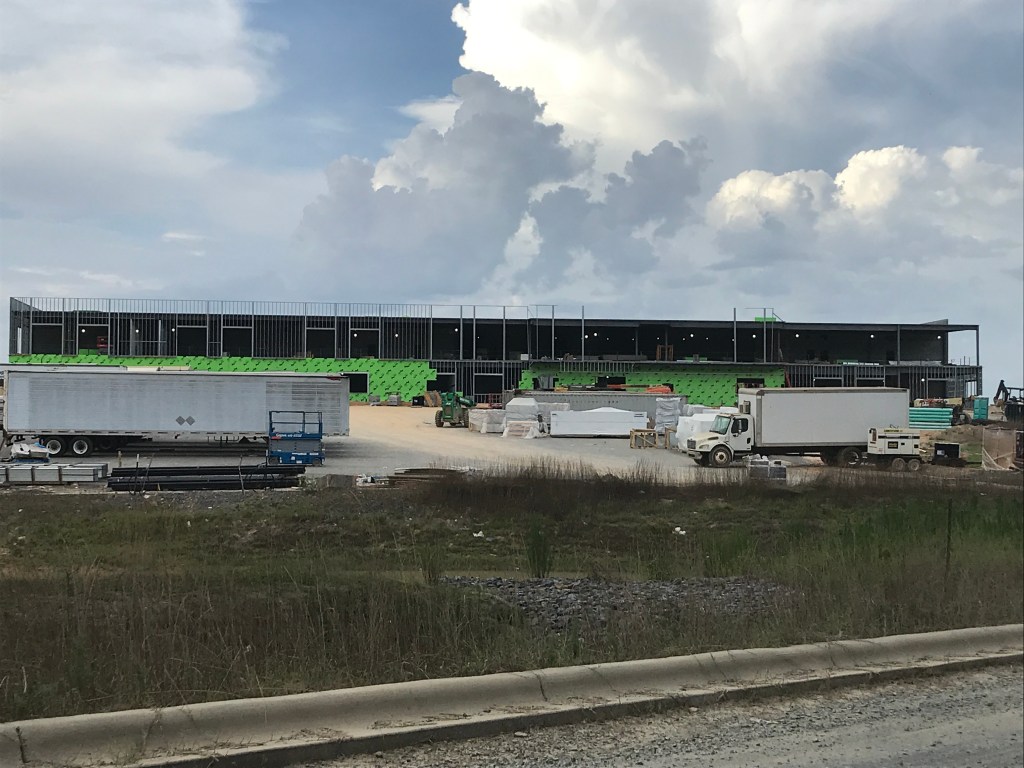 The new Montgomery Central High School, which will open in the fall of 2020, along with a new career and technical education center, are being built on 72 acres.

Stanly County is not alone in dealing with school consolidation issues. At least three North Carolina counties have dealt with the topic recently and decided to pursue a path toward consolidation.

Montgomery, like Stanly, is a rural county dealing with a stagnant population growth. Over the last several decades, numerous bond referendums have come up about consolidating the county’s two high schools — West Montgomery and East Montgomery — and building a new high school in Troy. Though they have failed, the topic of consolidation has continually been discussed.

Dr. Dale Ellis became superintendent in 2010. During one of his first public meetings, “the first question that the community asked me was do you support one high school or two,” he said.

In order to better answer the question, in 2011, the school system created a facilities committee composed of school board members and county commissioners to look into the possibility of consolidation. The committee examined the age of the school buildings, enrollment numbers, the finances involved and other relevant information. SCS Superintendent Dr. Jeff James was assistant superintendent under Ellis during this time and served on the facilities committee.

The two high schools were built in the early 1960s and are too expensive to operate and maintain, Ellis said.

School officials, board members and county commissioners traveled to other counties in the state and in South Carolina that had dealt with consolidation. They examined new and renovated school buildings.

After talking with different counties, the consensus was clear: it was better to spend money consolidating and building new schools than renovating current ones, Ellis said.

“Everybody has to have a lot of courage,” Ellis said, “because it (consolidation) does fan the flames of emotion.”

Ellis said Montgomery County Schools framed the consolidation conversation around doing what was best for the kids and not necessarily what was most convenient for the adults.

In 2016, five years after the facilities committee was created, the school board unanimously voted to approve consolidating the two high schools and building a new school.

The county received a $69 million loan from the United States Department of Agriculture to build a high school and a career and technical education center.

Many in the public were still upset with the decision.

“It doesn’t matter how many facts you put out there,” School Board Chairman Steve DeBerry said, “there’s going to be a certain segment of the community that’s never going to buy in and accept it.”

The CTE center will open in January while Montgomery Central High School will open next August, just in time for the 2020-21 school year.

The high school and CTE center rest on more than 70 acres. They are being built on land donated to the school system in 1979. The land is adjacent to Montgomery Community College.

The school system has created academic and athletic transition committees for both high schools to prepare for 2020. The two schools’ booster clubs have already merged.

The two schools have also combined their athletics teams for the upcoming school year. The teams will be the Montgomery Central Timberwolves.

In order to pursue consolidation, compromise had to happen, Ellis said. There were certain things the different groups wanted.

“Ultimately it ended up where nobody got 100 percent of everything they wanted,” Ellis said.

Many of the school board members, who routinely ran for reelection unopposed, encountered opposition after the 2016 decision.

For other counties considering consolidation, Ellis emphasized consolidation is a deliberative process that cannot be sprung on the public. The school board needs to always be transparent and honest with the public when describing its decisions and plans.

“You’ve got to have board members and you’ve got to have county commissioners that are more worried about doing what’s right than reelection,” Ellis said. “That’s the most important thing.”

Last November, the Rowan-Salisbury School Board introduced a proposed consolidation plan to close a handful of elementary, middle and high schools.

The decision was the culmination of a year’s worth of research and analysis from the school board’s capital committee.

The committee focused on the basics: the age of the school buildings, the money spent to operate and maintain the buildings and the enrollment numbers for each school.

A roofing and security analysis were also performed for each school, School Board Chairman Joshua Wagner said.

“We realized very quickly that we were without a doubt in the red,” Wagner said.

The school system has had monthly meetings to increase transparency. It has had capital committee meetings open to the public and community meetings at the high schools.

“We put the information out there, let folks come and speak, ask questions and we tried to do everything we could…to answer as many individual questions as possible,” Wagner said.

The consolidation plan was presented to relieve the district’s strapped budget.

According to a December article in the Salisbury Post, Rowan-Salisbury Schools needs about $5.3 million each year to maintain its 35 schools. But the district receives only $2.4 million from Rowan County to put to school repair and maintenance, resulting in an almost $2.9 million annual deficit.

Though the plan is on hold, Wagner believes the county will have to consolidate schools.

“In my opinion, there’s just mathematically no other way to do it when you look at the fact that we have 2,500 empty seats,” he said.

With older buildings, less specialized courses and lower school enrollment than in years past, “really, the students are the ones suffering,” he said.

Wagner said North Rowan High School has had to cut some of its athletic sports — particularly for the girls — because the school does not have enough students to build teams.

“I hope that moving forward, sooner than later, we can make a decision, even if it’s a long-term decision, to start this process of consolidation and redistricting,” Wagner said.

He said the most important aspect when a county is looking into consolidation is making sure the information presented to the public is accurate, because once the information gets out, a lot of people will “begin tearing it down, changing information, finding reasons why it’s not accurate” and hoping the school board “will just throw their hands up and walk away.”

“You have to be willing to stand behind the data, as long as it is factual and accurate,” Wagner said.

He said if consolidation is implemented correctly, it can have long-lasting benefits.

“If you can consolidate and do it the right way, not only does it save money but in the future, when you start to grow again, hopefully then you can strategically decide where to start expanding and putting new schools so you’re not in the same position you are now,” Wagner said.

School board members in Robeson County, in order to cut costs, introduced a consolidation plan in June which would close five schools. Under the plan, students would be sent to other schools in the district.

A July article in The Robesonian listed four schools — three elementary schools and a high school — as being closed to help correct a $2 million deficit.