Stanly knife-maker buoyed by success after winning ‘Forged in Fire’ 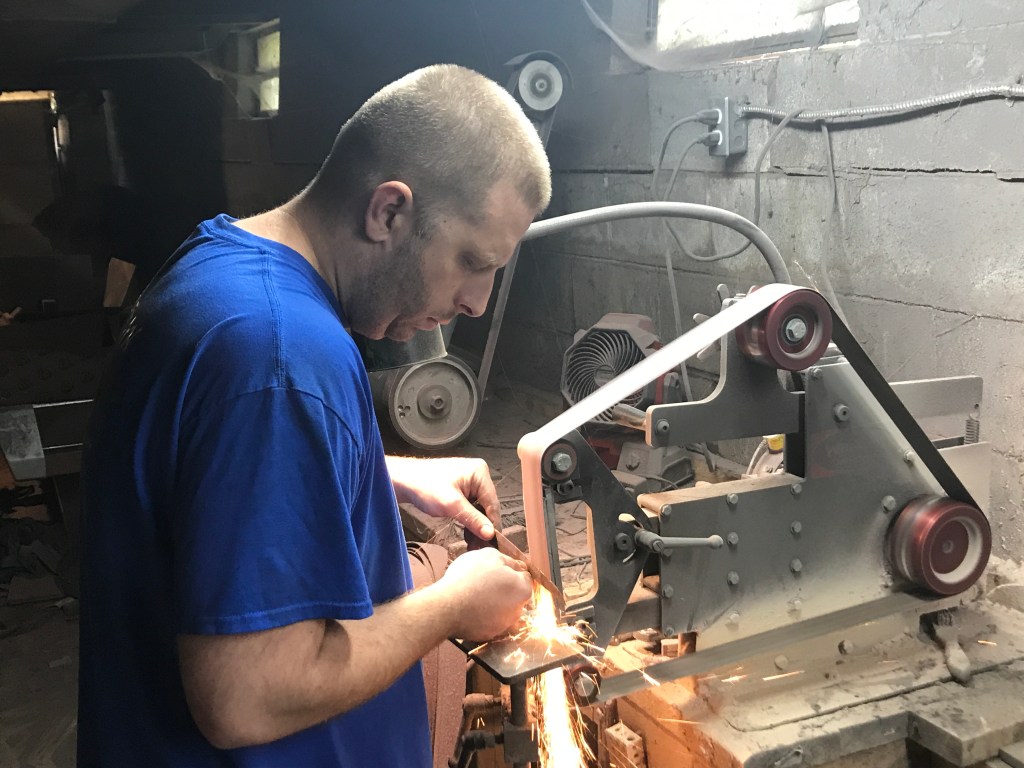 Gabe Mabry grinds one of his knives on a belt grinder in his basement.

The show pits four of the nation’s top bladesmiths against each other for three rounds of competition until one remains — and in the Sept. 15, 2017 episode, Mabry was the one.

Before the show aired, Mabry worked part-time making knives along with several other part-time jobs; since the show, in the beginning of 2018, Mabry made bladesmithing his full-time job.

The episode “showed me in a favorable light so it did nothing but help my business tremendously,” he said.

“A couple of months after my episode aired the demand picked up enough to where I could quit my other jobs and focus on bladesmithing,” Mabry added.

He mainly makes kitchen and hunting knives, though he has made a few swords, including one called the Yatagan during the final challenge of the show. 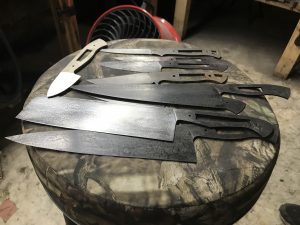 A selection of different steel knives.

His business is divided between online sales, referrals and going to bladesmith shows. He sells knives to people around the state, nation and internationally. He has sold to around to 10 countries.

Mabry said his most popular kitchen knife is an eight-inch gyuto, which is a Japanese knife.

The Albemarle native, who was once a Johnson and Wales-trained chef, has come a long way since he first taught himself the art of blacksmithing about a decade ago.

He stumbled upon blacksmithing after a Bible passage which mentioned irons piqued his interest. He started researching blacksmithing for context information and the more he read, the more interested he became.

“My goal was short-term to figure out the context of that information so that I could understand of what it was referring to in the Bible,” he said.

After pouring through hundreds of pages of information on the subject, Mabry decided to turn his knowledge into a real application.

“I just decided one day I’m going to try to figure out how to build a forge and try this thing,” he said.

And thus far, he’s come a long way from simply “trying this thing.”

His winning kitchen knife is featured in the September issue of Blade, a consumer magazine about knife collecting. He’s quoted in the magazine saying his knife is “designed to be a veggie and protein slayer.”

Even before he begins the actual knife-making process, Mabry has to calculate the precise volume of how thick or thin he wants his blades to be.

Mabry makes all his knives at home. He starts in his garage, forging the steel on an anvil, refining its shape and heat treating it before taking the steel to his basement, where he grinds and polishes it, attaches a handle and sharpens it. He prefers to work into the late hours of the night. 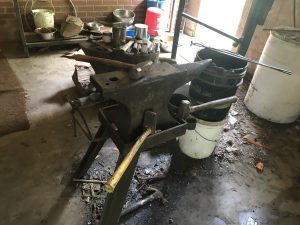 Every bladesmith needs their own anvil, Mabry said.

The length of time varies depending on the quality of the product. It can take Mabry around a week to make a single high-quality knife, while he can make 20 to 40 basic knives during the same time.

He takes pride in the fact his knives are functional, with simple, clean lines as opposed to the ritzy details other bladesmiths might be known for.

“I don’t want to just make something,” he said. “I want it to have a purpose. Everything I do is functional.”

His favorite part of the job is the satisfaction he gets from crafting his own blades and seeing his customers satisfied.

“You get to have them enjoy something that you made,” he said, adding that with proper care, the custom-made knives can last 50 to 100 years.