During the early 1940s, there were a lot of soldiers in Stanly County on maneuvers.

My great-grandmother, Letha Parker Starnes, and my grandparents, F.E. and Ruth Starnes, hosted quite a few soldiers in their home on South Third Street. They would arrange entertainment for the men and many of the soldiers would spend the night. 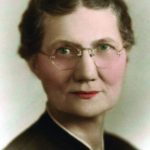 During this time, Letha struck up a friendship with one soldier in particular, Eric Larder, from Massachusetts.

Eric visited Albemarle on several occasions before the Army sent him to Europe to fight. Eric and Letha corresponded while he was overseas, and they continued to stay in touch until Letha died in 1964. Letha always considered Eric and his wife Rita her “Yankee children.”

A number of years ago, my mother found a stack of letters that Eric had sent to Letha while he was serving in Europe during World War II. 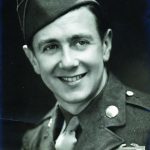 Through internet searching I was able to find Eric and sent him a letter. He sent a nice reply, but he did not reply to a second letter. (I later found out he was very sick at the time.)

In 2010 we had some family discussions about putting the letters into a book. When trying to reach out to Eric again, I found that he had passed away. I was able to find Eric’s daughter Dawn, who loved the idea, and we continued to stay in touch.

During 2015, Dawn and some of her family were visiting Charlotte and they made a day trip to Albemarle to visit with my parents and my uncle, Gene Starnes. They were excited to get the chance to visit the jewelry store and house where Eric had spent such special time with Letha and my grandparents. It was so nice after 51 years for our families to have truly reconnected.

The Stanly County History Center has copies of the book I put together of Eric Larder’s letters to my great grandmother. They are a fascinating insight into the life of a soldier during the war.